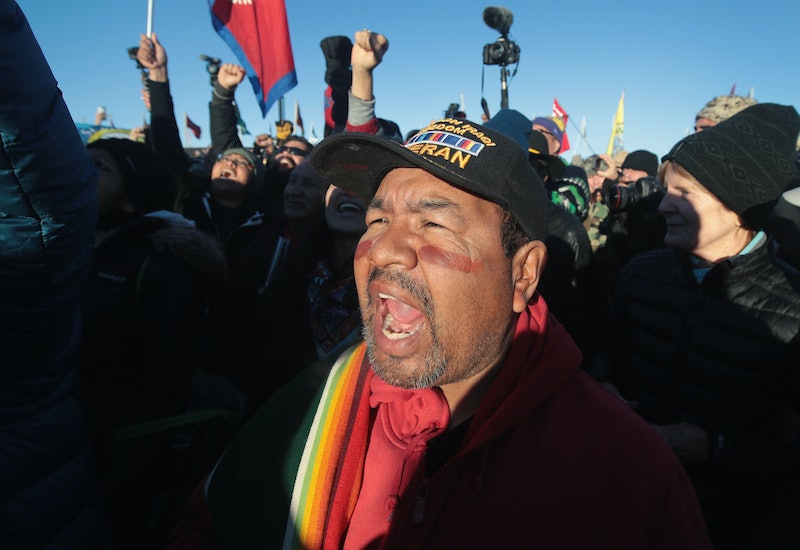 Today's announcement that the construction of the Dakota Access Pipeline (DAPL) will be stopped in favor of exploring alternate routes for completing the pipeline marks a substantial victory for Native American protesters and their allies after months of protesting against its construction. Enduring the harshest of conditions, their commitment in the face of adversity demonstrates the power of activism in rectifying injustices, and should serve as an example for all on how to stand strong and advocate for your rights.

The DAPL protesters, who are largely composed of several Native American tribes, have been consistently fighting the construction of the pipeline for months, as they believed its construction would threaten the safety and sanctity of their ancestral lands and nearby reservation. Protesters began taking a stance back in April of this year, and their numbers increasingly rose as the months progressed. Indeed, so many activists came to the area to protest that a "protest camp" was erected, which eventually housed thousands of people.

The victory of the DAPL protesters in bringing widespread attention to the threats to native land posed by the pipeline, which likely played a large part in halting its construction, is especially honorable. These protesters should serve as an example to us all that concerted, targeted, and committed activism really does work.

This lesson is especially important in an increasingly divisive post-election America where people, particularly minorities and other disenfranchised groups, have already experienced overt discrimination as well as threats to their rights and lives. These threats include hate crimes and intimidation; indeed, the Southern Poverty Law Center reported that 867 hate crimes occurred in the ten days following Trump's election. While the large protests across major cities that occurred in the days following Trump's election have seemingly dwindled, a variety of other forms of activism continue to occur, including petition signings, solidarity movements, and smaller-scale protests, among others. These displays of activism display solidarity with disenfranchised groups as well as help to attain funds and raise awareness to protect their rights.

The victory of the DAPL protesters in halting the construction of the pipeline should serve as a re-invigoration for activists seeking to ensure that everyone's rights are protected in 2017 and beyond. Whether it's through resuming peaceful protests, recommitting even more strongly to social justice activities, publicly showing solidarity with disenfranchised groups, donating to human rights advocacy NGOs, or a variety of other activities, the DAPL protesters have shown us that beginning or continuing to engage in these endeavors in the long term is exceedingly crucial.

Even if it may take awhile, and even if you face adversarial conditions, activism is one of the best ways to perpetuate positive change. In an article reflecting on the importance of activism in light of the Arab Spring, journalist Asim Haneef aptly captured this point with a sentiment that still applies today, stating:

[The] great social movements began with a set of ideas validated, internalised, and then shared and amplified through media, grassroots organisations, and thousands, even millions, of conversations that spread out in multiple ever-widening circles which led to what they were seeking – justice for their cause and a fundamental change in the established system.

If you need some inspiration for a variety of actions you can take to start or continue your activist journey, I recommend starting here with a short but informative article from Sarah Sophie Flicker, an experienced organizer and activist. The DAPL protesters proved that activism in the face of injustice does work — and they should serve as an inspiration to us all to call on our own inner activists to take action to stand up for everyone's rights in increasingly turbulent times.