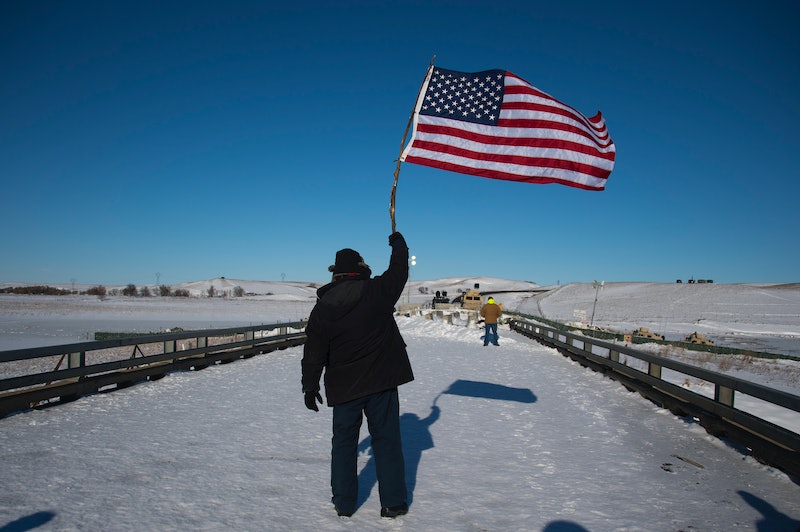 Sunday the Army Corps of Engineers announced a big win for the Standing Rock protestors: it would not grant the easement to the Dakota Access Pipeline that would allow the project to cross the Missouri River near the Sioux reservation. Supporters were both celebratory and wary at the announcement with plenty acknowledging that it could be reversed or ignored — ultimately more a delay than a true end to the story. So when will DAPL be completed now? The most recent announcement signaled that the Corps would search for an alternative route; that could decide the timeframe, but there are many variables.

The pipeline was supposed to be completed in the fourth quarter of 2016, but that clearly hasn't happened. First construction was stopped in November temporarily by the Army Corps of Engineers. Now the pause is more final, the Army's Assistant Secretary for Civil Works Jo-Ellen Darcy announcing Sunday that it would be rerouted. "Although we have had continuing discussion and exchanges of new information with the Standing Rock Sioux and Dakota Access, it's clear that there's more work to do," Darcy said in a statement. "The best way to complete that work responsibly and expeditiously is to explore alternate routes for the pipeline crossing."

Now at least until Trump and his administration take power — and assuming the company follows the ruling — the timeframe will depend on the Corps process of finding alternate routes. Darcy said the Corps will do an Environmental Impact Statement with full public input and analysis — not a short process. Those two qualifiers, though, are quite a big concern for protestors and opponents of the project.

First, the company who plans to build DAPL said Sunday that they "fully expect to complete construction of the pipeline without any additional rerouting in and around Lake Oahe." That's the name of the manmade lake that forms this section of the Missouri River. The company has already tried to go around the Army Corps of Engineers and filed suit in federal court accusing the agency of making a political decision and asking the courts to let it move forward with its existing permits.

Second, the Army Corps of Engineers is led by a political appointee. Darcy, who made the announcement Sunday was appointed by the Obama Administration. Trump's choice in January could have different priorities — including quickly approving the pipeline given that Trump owns stock in the pipeline company and one of the oil companies that will use the pipeline when it is completed.

As of now, no work should take place during the winter — which would be a big relief for protestors. But given the unclear future of the project, some have decided to say. When and where the pipeline will be finished is still a big mystery.

More like this
How The City Healed Five Years On From The Manchester Arena Attack
By Ella Glover
Michigan’s Governor Is “Going To Fight Like Hell” To Protect Abortion Access
By Andrea Zelinski
How To Fight For Reproductive Rights, Based On How Much Time You Have
By Courtney Young
Harry Styles Called For "Backlash" In Powerful Statement On Abortion Rights
By El Hunt
Get Even More From Bustle — Sign Up For The Newsletter