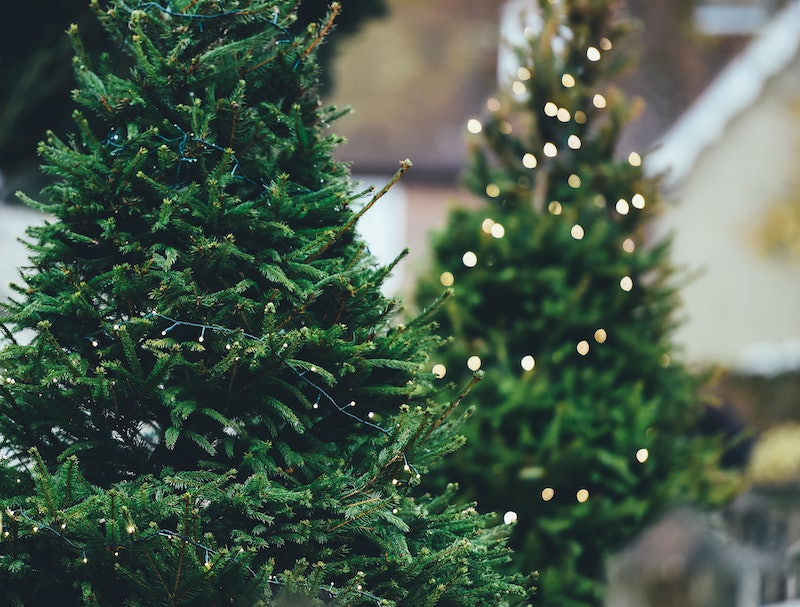 One of the most discernible symbols of Christmas is the Christmas tree — the festive name for the Balsam Fir, aka the Abies balsamea (L.) Miller plant. And while I'm sure we can all agree that a decorated evergreen is a Christian holiday staple, the actual history of the Christmas tree, as the Huffington Post points out, has multiple roots, and is a bit more complicated to pinpoint. The evergreen tree gets its name for being just that — forever green. In the winter, when the temperature drops and other trees lose their leaves, this tree remains vibrant. In ancient times, people even brought these lively trees into their homes thanks to a superstition that they have the power to keep away evil (they [likely] do not). Additionally, ancient civilizations and pagans brought greenery into their homes in the winter to symbolize life and health, as they believed their sun god suffered in the winter. Hence the winter solstice, a winter celebration categorized by harvest-fresh feasts and evergreen boughs around the home.

But the Christmas that we know, as brought forth by Christian traditions, began in the 16th century in Germany. And so the story goes: the 16th-century Protestant reformer Martin Luther had a festive epiphany as he walked past an evergreen on the way home from a Christmas sermon. Inspired by the way the stars in the sky twinkled between the tall branches, he decided to bring home a tree and decorate it with lit candles to evoke the same feeling and share it with his family.

By the 19th century, many Germans began to settle in Pennsylvania. With them, they brought their tradition of Christmas tree decoration. But, at that point, Americans had yet to embrace the practice, as they still saw it as a pagan tradition and did not identify with it due to their worship of Christianity. But, in 1846, when Queen Victoria embraced the concept of the Christmas tree and posed with her family in front of one, her influence spread like wildfire. By the 1890s, Christmas as we know it in present-day America had begun to materialize. Ornaments were not only permitted, but encouraged, Christmas tree farms flourished, and Americans began to adopt the tradition as their own.

While it took a long time for America to get on the Christmas tree train, the nation certainly makes up for its hesitations by going all out for the holiday. In present-day America, the Christmas tree has come more to represent unity, communal celebration, optimism for the year ahead, fondness for the year just past, and reminder to be grateful for one's fortunes. While, for some people, the Christmas tree is tied to a religious tradition, many people of all backgrounds have come to appreciate the delight a decorated tree inspires.

More like this
How To See The Lunar Eclipse On May 15-16, 2022
By Kaitlyn Wylde
What Does It Mean To Be “A Pick Me Girl"?
By Courtney Young
The 6 Best Balaclavas To Keep Your Face, Head & Neck Comfortably Warm
By Jenny White
9 Common Phrases Sociopaths Might Use On The People They Love
By Kristine Fellizar
Get Even More From Bustle — Sign Up For The Newsletter