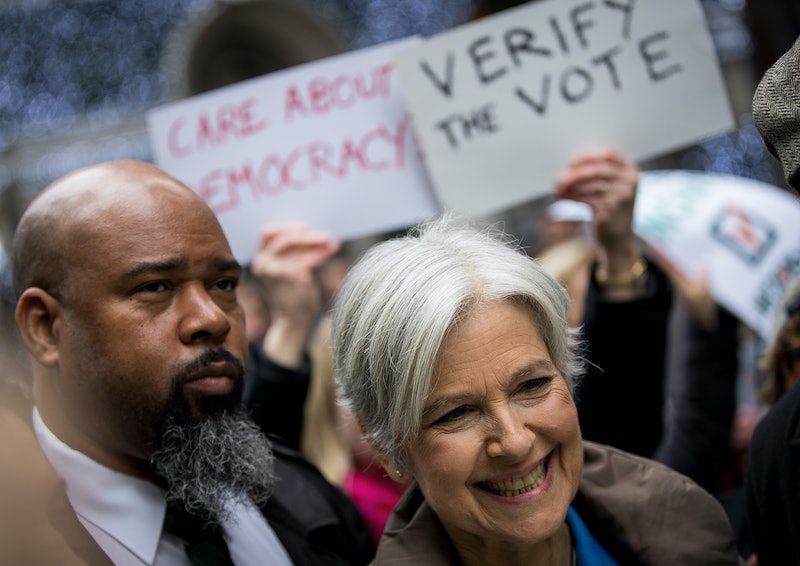 The recount effort lead by Green Party candidate Jill Stein in Michigan, Pennsylvania, and Wisconsin brings out a lot of feelings in me. One is frustration at Stein for having a too-little-too-late realization about the role she played in the election of Donald Trump. Another, though, is hope from the little glimmer of the possibility that maybe Trump's electoral vote win is all a bad dream. Still, with a federal judge ordering the Michigan recount to go ahead on Monday — even as efforts in Pennsylvania seemed to be in a confusing, shaky state — we find ourselves asking (again): What's the point? Is this even worth it?

I believe the answer, as it's been this whole unlikely time, is it's not only worth it, but also necessary.

Mathematically, things are looking dim. To affect the outcome of the election, Stein's recount campaign will have to overturn the results of the vote in all three of the contested states. Trump's margins of victory are narrow in Michigan and Wisconsin; however, the Hillary Clinton campaign lawyers who are participating in the recount acknowledged that in all three states, Trump's margin of victory is greater than any deficit overcome by historical recounts. Moreover, statistics experts like Nate Silver and Nate Cohn have come out to say that the data from the returns looks sound.

Plus, Stein's effort in the state that holds the most electoral votes of the three recount targets — Pennsylvania — has faced hurdles of late. On Saturday, Stein withdrew a lawsuit initiated in Pennsylvania state court to force a statewide recount (Pennsylvania normally requires recounts to be requested precinct-by-precinct, of which there are nearly 10,000). The suit was dropped after the judge asked for the 100 voters who brought the suit (backed by the campaign) to post $1 million bond to pay for the recount. But late Saturday night, Stein tweeted that she would take the fight to federal court, looking to file suit Monday.

In a statement released by Stein, she declared that "the judge's outrageous demand that voters pay such an exorbitant figure is a shameful, unacceptable barrier to democratic participation."

While the chances of anything substantial changing are still long, Stein's point here should not be overlooked: All of these recount efforts are happening within the scope of the law, according to established rules and procedures, and are being pursued following an election where enormous suspicion was cast over the electoral process.

So while Stein's effort may fail mathematically in Pennsylvania, that doesn't invalidate the importance of the recount more generally. I believe we should kick the tires of our electoral system, and we should probably do it more regularly than we do, especially given how quickly and dramatically the methods for voting have changed with technology.

I believe that to do anything less would be downright unpatriotic.