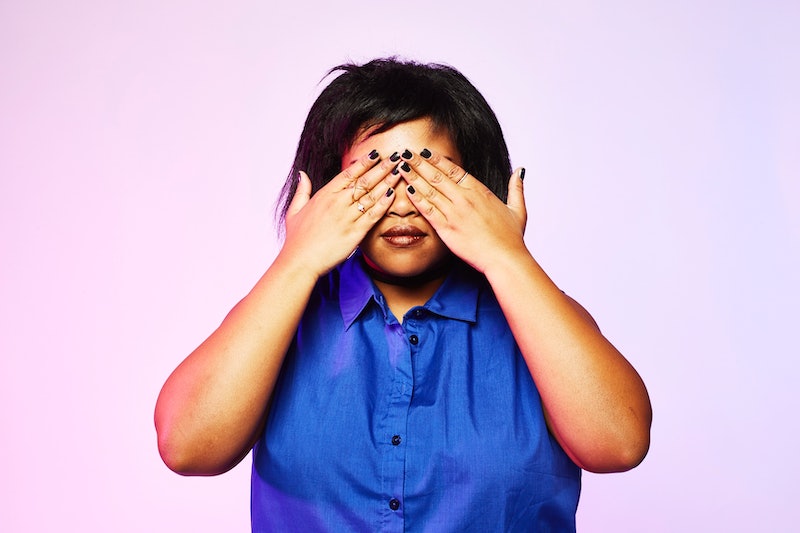 In the name of self-improvement and personal growth, almost half of the country makes a New Year's resolution at the beginning of every year. In 2015, the most popular resolution people made was losing weight, followed by "getting organized," and being more frugal with their spending. No matter how exciting the promise may seem at the beginning of the year, though, the truth is, only eight percent of Americans actually follow through with their New Year's resolutions. The rest of us either burn out in the first couple months, or we simply get too busy to even remember what our resolutions are.

For many people, though, how close they actually get to fulfilling their pledges matters a lot less than the stress and anxiety caused by making New Year's resolutions in the first place. Being surrounded by all that talk about bettering yourself and improving your life can be confronting for people with a mental illness or an eating disorder — or even just for people who are going through a particularly stressful time. The mere concept of setting resolutions can trigger a lot of negative feelings and potentially cause your self-esteem to plummet.

This isn't uncommon, according to Barrie Sueskind, MA, MFT, a Licensed Marriage and Family Therapist in Los Angeles who specializes in anxiety, depression, and life purpose. "Toward the end of the year, people start to realize how quickly time has passed," Sueskind tells Bustle. "We often realize we haven't accomplished as much as we hoped we would since the beginning of the year, which can bring about a sense of stagnation and disappointment in ourselves." The last thing we want to do is commit ourselves to yet another round of resolutions that we're afraid will only bring us failure.

Resolutions don't have to prompt these unpleasant sensations, though. After all, they're meant to make us feel positive about the future. Here are some tips to help you deal with New Year's resolutions if they trigger you.

OK, so you get really sweaty when the conversation of New Year's resolutions kicks off. The worst thing you can do is deny yourself the chance to feel whatever it is you're feeling. Anyone with an anxiety disorder knows this kind of denial is often a recipe for disaster, so don't beat yourself up if you notice an extra layer of stress settling onto your shoulders when you consider what your resolutions will be for 2017.

"Many people experience stress around the holiday season," Sueskind confirms. It's important not to ignore the sensation, though, or else it will build up and cause distress later. Go somewhere quiet by yourself and take a moment to acknowledge the anxiety. Remind yourself that it's normal to experience these emotions at this time of the year — and that you're definitely not alone.

After accepting the fact that resolutions leave you feeling agitated, turn your attention to the heart of the matter. Ask yourself what it is that's really bothering you, because as much as you may despise this New Year's tradition, it's not the true source of your anxiety.

"People who feel triggered by New Year's resolutions may see them as a reminder of the goals they have not yet achieved," Sueskind tells Bustle. "Feelings of inefficacy are often associated with depression and anxiety." As a result, even thinking about setting goals for the next year can put a great deal of pressure on your shoulders.

Deep down, you may be disappointed with how this last year went, or concerned that you won't accomplish what you'd like to in the next 12 months. This might be a good chance to take some alone time and contemplate what's really going on internally. Even better, speak to someone you trust, like a good friend or a therapist. Working through these insecurities isn't easy, but it's worth the effort, since it will help you manage your stress in the longrun.

If you've decided to make some resolutions for yourself, Sueskind suggests you avoid aiming toward broad goals, such as "live life to the fullest" or "excel at work." Think about starting smaller than that. "It is easier to remain committed to small resolutions than large ones. Large goals may seem daunting and cause you to give up before you begin trying," Sueskind says. Besides, not only are these resolutions big commitments, but their nonspecific nature make it difficult to determine whether you're actually doing what you set out to accomplish.

Instead of pushing yourself to take over your company in this next year, be a little bit more specific and promise yourself that you'll ask for a raise, or keep your room cleaner. Aspire for something that's specific and doable, and you'll be much more likely to actually do it. Sueskind also suggests you reward yourself when you make a step forward, no matter how small the change might seem to others.

"Avoid measuring yourself against your parents, your sister or your best friend," Sueskind recommends. "Remember that you are your own person on your own journey." Just focus on yourself, where you're going, and what you're doing. The rest is just (annoying) white noise.

Unfortunately, one of the worst parts of playing the New Year's resolution game these days is that everyone is posting their progress on social media. Seeing everyone's achievements on display at every turn can quickly deteriorate your self-esteem — so you should consider recalibrating how you use your social media platforms. Don't use them in a way that's going to bring you down, and don't drown in other people's seemingly-perfect posts.

It's hard not to roll your eyes at all the fitness- and diet-focused New Year's resolutions, because at the end of the day, most of them are all about losing weight. People post updates of themselves going to the gym and share photos of how much thinner they look after giving up bread for two weeks. Witnessing all that can quickly breed self-doubt, and it's no wonder so many of us get triggered by the most popular resolutions.

If all that talk of dieting and working out makes you feel anxious, don't take part in it. In fact, when you're setting resolutions, shift the focus away from your physique and instead think about the things you want to improve internally or relationally. Sueskind proposes you "set goals that are meaningful to you," rather than trying to change the things that society is encouraging you to concentrate on.

It sounds radical at first, but just because everyone around you is knee deep in resolutions doesn't mean you have to join in. "You are exactly where you need to be right now and you can choose where you go tomorrow and the next day," Sueskind tells Bustle. You don't need a New Year's resolution to make you better, more successful, or more worthy. Choose whether making a resolution is a tradition that's right for you. At the end of the day, if it worsens your mental health or takes away from your overall happiness, don't even waste your time with it.

More like this
What Is The Forest Personality Test? The TikTok Trend, Explained
By Georgina Lawton
Jane Lynch Revealed Why She’s Leaving 'Funny Girl' After Lea Michele Was Cast
By Grace Wehniainen
RushTok 2022 Is Here & TikTok Is Just As Obsessed As Last Year
By Sarah Ellis
Megan Thee Stallion Gave These “Ugly” Trends The Hot-Girl Upgrade
By Allie Fasanella
Get Even More From Bustle — Sign Up For The Newsletter