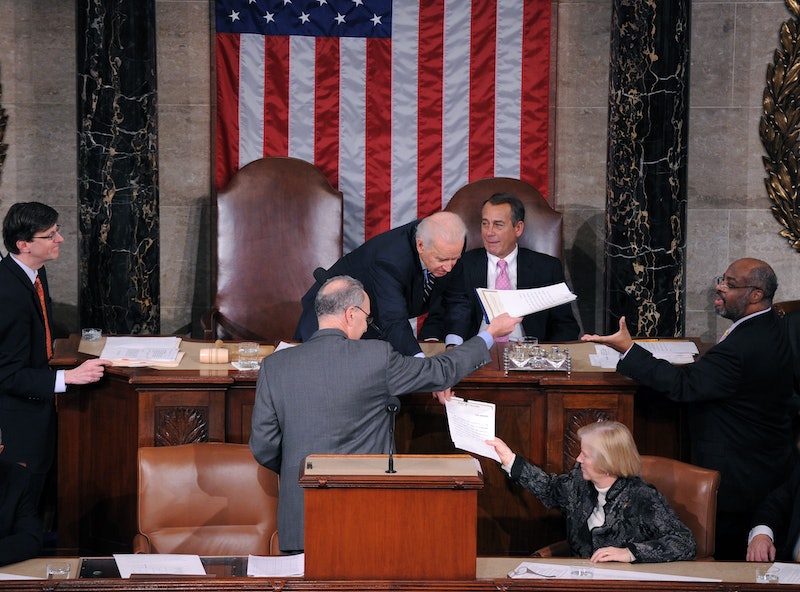 Donald Trump's widely unexpected presidential victory has led many Americans to become more familiar with the intricacies of the electoral process, perhaps the most familiar they've been since the days of Bush v. Gore in 2000. Even after all the discussion of recounts and so-called faithless electors has subsided, though, there are still more steps in the process between Election Day and the inauguration of the president-elect. After the Electoral College votes, though, Trump's victory will be all but certain.

On Dec. 19, electors will meet in their respective states and cast separate ballots for president and vice president. They make multiple sets of each vote and send one to the President of the Senate (the current vice president, in this case Joe Biden).

Assuming Trump passes the 270-vote threshold, he will be inaugurated as the 45th president of the United States on Jan. 20, 2017 in Washington, D.C. Traditionally, the vice president (in this case, Mike Pence) will be sworn in first.

Even if all does go to plan with the Electoral College, though, there are many planned disruptions, marches, and acts of civil disobedience set to occur on and around Inauguration Day. The Women's March on Washington is planned for Jan. 21, 2017, and currently lists around 224,000 attendees on Facebook. That march, according to the official Women's March website, is planned as a protest calling for equity for women in leadership and to "send a bold message to our new administration ... that women's rights are human rights" (that last part is from Hillary Clinton's famous 1995 speech at the United Nations Fourth World Congress on Women).

Fox 5 DC also reported that many protests groups are waiting to find out which public spaces will be allocated for demonstration on Inauguration Day.

Despite these protests, though, it does seem clear that barring a major Electoral College upset, Donald Trump will become the president after the electors cast their ballots.