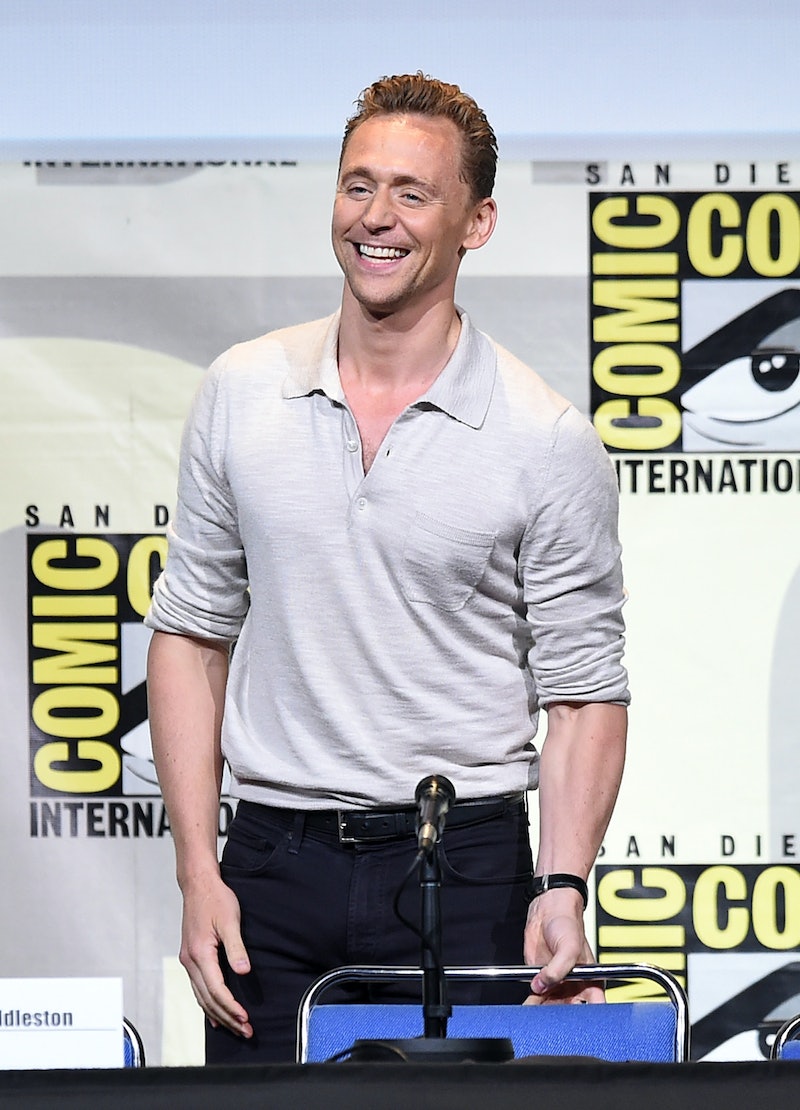 They may be never ever getting back together after their split in September, but this new photo of Tom Hiddleston and Taylor Swift is something to note of. As shared by E! News, Hiddleston was photographed taking a run in London, but it wasn't your typical jog. He happened to run past a piece of graffiti art featuring T. Swift. The art, which is by artist Fussy Human, shows Swift on the phone, saying, "Oh Tom...I love you too... But..." It appears to be the moment she reportedly broke up with him after their highly-publicized and short-lived romance over the summer of 2016.

There's no doubt that T. Hiddles running past the art is both amusing and somewhat awkward. What are the odds that he would just happen to run past graffiti featuring one of his ex-girlfriends and the one that he probably will forever be remembered as dating? Obviously, a literal run-in with the real-life version of Swift would be even more entertaining and way more uncomfortable, but still.

This paparazzi photo may just be another paparazzi pic to some, but is it really? Actually, I think it speaks volumes and that there are plenty of things to take note of. Yes, I may be unnecessarily analyzing it, but when it comes to Hiddleston and Swift, that's what we're supposed to do, right? Let's not forget about all those Hiddleswift conspiracy theories.

With that said, here's a list of things to think about as you stare at Hiddleston and Swift's most recent "run-in."

1. That Scrunched Up Nose

If you look closely, it appears Hiddleston's nose is all scrunched up. There's a good chance that his nose is itchy or there's a funny smell in the air. Or, you know, it could be part of his reaction upon seeing the art. Maybe that's what his nose does when he's just plain full of feelings.

Do you notice how Hiddleston is behind the image of Swift? That certainly speaks volumes about their relationship, especially since she seemed to be more at the forefront than him. Of course T. Hiddles is super popular and talented, but he wasn't the world's highest paid musician of 2016 now was he?

That orange jacket just might be Hiddleston's way for traffic to pay attention to him while he's running. It's definitely bright and a great way to stay safe during a jog. On the other hand, maybe the jacket (which is truly awful) is his way of trying to stand out on his own. If that's the case, it didn't seem to work, did it?

Isn't it funny how Swift is on the phone breaking up with Hiddleston in the art piece? It sounds similar to when Joe Jonas broke up with 1989 singer over the phone in 2008. Maybe the artist was trying to taking two jabs with one pic?

Hiddleston has ear buds in. What do you think he's listening to? Do you think he has his best "Taylor Swift Breakup Playlist" on?

6. It's Just As Public As Their Relationship

Swift and Hiddleston had one of the most public celebrity relationships ever. Well, this photo of their "run-in" seems to be becoming just as popular as their former romance. Once a headline, always a headline, right?

Let's remember that there's a chance Hiddleston may have not even seen the T. Swift art. He may sign onto Twitter later and be just as shocked as everyone else who is seeing it for the first time.

It's official: There is no escaping Hiddleswift and all of the analyzing that comes with the now extinct 'ship.