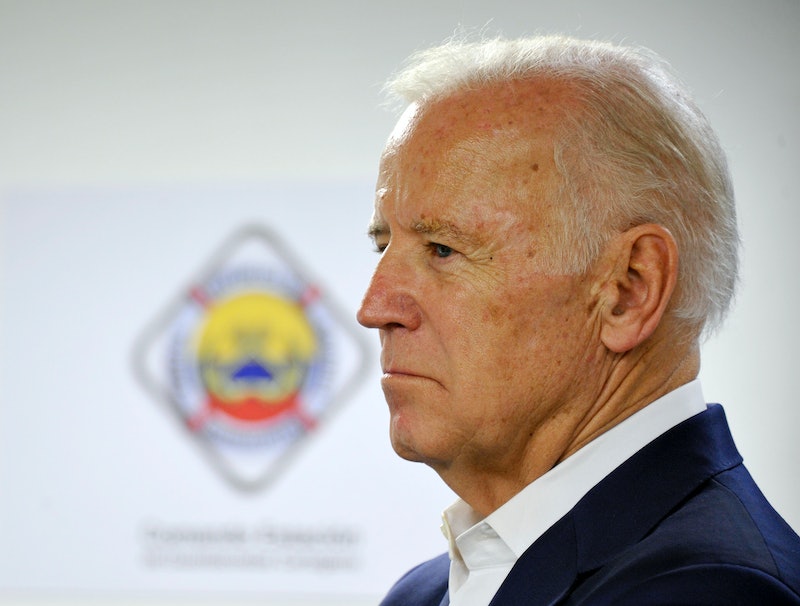 In a surprise announcement Monday, Vice President Joe Biden said he'll run for president in 2020, though he added that he's "not committed" to doing so just yet. Biden came close to running for the Democratic nomination in 2016, but opted not to at the last minute. Most assumed this was the end of Biden's presidential ambitions, but apparently, it wasn't.

"Yeah, I am. I am going to run in 2020," Biden told a group of reporters when asked if he'd seek elected office again. "For president."

According to Fox News reporter Chad Pergram, Biden took a "LOOONG pause" when asked if he was kidding, sighed, and replied, "I'm not committing not to run. I'm not committed to anything."

On the one hand, this is quite surprising, and not just because 2020 is still four years away. Biden turned 74 in November, so he'll be nearing his 78th birthday by the time the next presidential election comes around. Were he to win, he'd be the oldest first-term president in U.S. history (currently, 70-year-old Donald Trump is on track to be the oldest president to be inaugurated for the first time).

On the other hand, this isn't the biggest shock in the world, given how obvious it is that Biden would really like to be president. Before becoming vice president, Biden ran for the Democratic Party presidential nominations twice, for the 1988 and 2008 elections. He was also, by all accounts, very close to running in 2016, but opted not to, in part due to the recent death of his son, Beau.

Needless to say, take Biden's comments with a grain of salt. It's not at all unusual for politicians to float the idea of running for president long before the next election, only to back out later on down the line. Former U.N. Ambassador John Bolton said he was considering a run in both 2012 and 2016, and former Minnesota Gov. Jesse Ventura announced he'd run in 2016 if Bernie Sanders lost the Democratic primary. Sarah Palin did just about everything in her power to stoke speculation that she'd run for president in 2012, going so far as to launch a national bus tour. Ultimately, none of them ended up throwing their hats in the ring.

It's easy to talk about running for president, and doing so almost always results in at least a little bit of free publicity. But actually taking the leap is a much bigger step, so let's not put too much faith in Biden's words just yet.