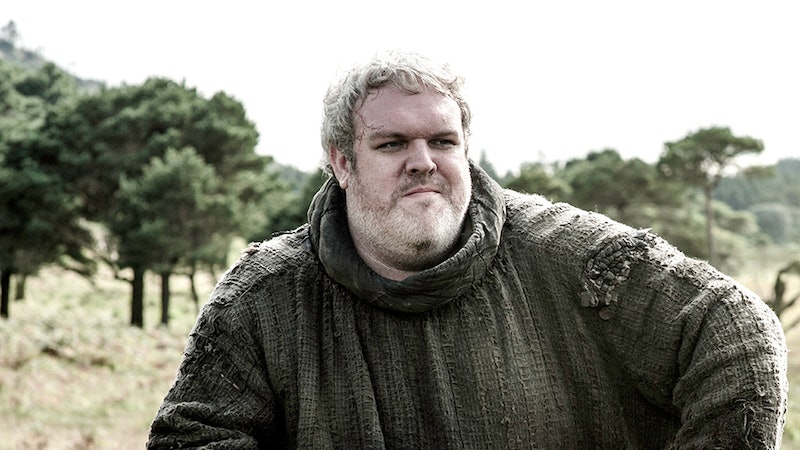 For a man of few words — well, one word, to be accurate, and that's his name — Hodor adds a lot to Game of Thrones, in both literal size (the actor who plays him is 6'10") and in emotional volume. But apparently, actor Kristain Nairn says that there are 70 ways to say "Hodor," each way packing a different emotional punch. Hodor is always saying way more than just his name!

Nairn said that there's actually a board up in the ADR room for Game of Thrones that lists all of the different postures and vocal intonations Hodor can have to indicate what's up with him. Nairn (who can say a lot more than the word "Hodor," by the way) said that there's, "angry Hodor, happy Hodor, sad Hodor, frightened Hodor, curious Hodor, bashful Hodor, sheepish Hodor ... and naked Hodor.”

While we've definitely seen frightened Hodor and sad Hodor, we have yet to see a truly angry Hodor (and oh, how enjoyable that would be!), or a naked Hodor... but hey, you know there's lots of nakedness in Westeros. It's basically just the epitome of nudity and bloodshed, so anything is possible. (Did you see the Honest Trailer for the series?)

We'll have to see what happens on Season 4 (which premieres on APRIL 6, BY THE WAY. It gets closer and closer! Winter is coming, you guys!), and be on the lookout for these variations. Still, 70 seems like a lot — but then again, human emotions are complex, as is the state of things in Westeros.

Besides, if there's "naked Hodor"... we can likely bet that there's "about-to-be naked Hodor."

And what do we have to say to that? Well, Hodor.