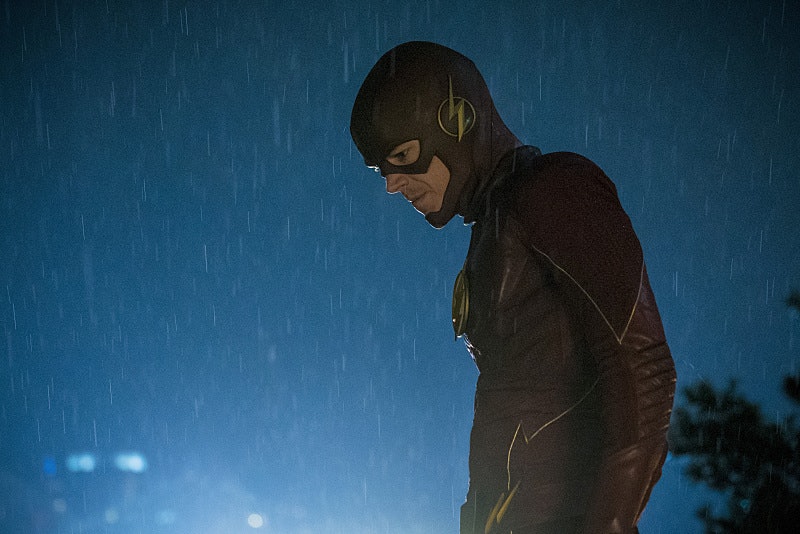 Now that the Heroes Vs. Aliens crossover team-up has sent the Dominators packing, it's back to each of the CW's superhero shows' respective nemeses. And in this season of The Flash , the central villain is Savitar. That's clear now, of course. Though when this third season began, it was Doctor Alchemy who was skulking around and imbuing Central City citizens with the metahuman powers they possessed in the Flashpoint timeline. But Alchemy — or should I say Julian Albert — was revealed to be merely a servant of a more powerful master, and one who may be in that service against his will. With his super-speed, invisibility, and exaggerated ego, Savitar is a creepy one. And that's before you factor in his eerie cult of followers. The Flash fans have been busy speculating about the origin of Savitar and a possible connection to a character they already know. The these Savitar theories are all viable and would all shake up The Flash considerably. The Flash mid-season finale airs this Tuesday, and I hope it will provide some answers.

I've seen some online grumblings that The Flash has become too dark as of late. And yes, The Flash is supposed to have different tone than Arrow. Barry Allen and Oliver Queen have divergent personalities, though they both bear the same responsibilities and take them very seriously. But death has touched both of them, and it wouldn't be right if The Flash continued to be as happy-go-lucky as the show was in its infancy. Savitar is a dark villain, and he's arrived at the perfect time. It's been a rough year for S.T.A.R. Labs, and I hope that vanquishing this Speed Force god will help them recover some of what they've lost. It may help to know who Savitar is or who he used to be, so here are a few guesses to review.

Savitar Is A Myth Come To Life

It would be an interesting route for the show to take. John Wesley Shipp, who plays Jay Garrick (and formerly Henry Allen), told Comic Book Resources that "Jay’s not sure that Savitar even exists." He's heard of the guy, but sort of as a speedster boogeyman. "He’s a Speed Force myth and — as an unseen, unknown fear — is even bigger than a fear that you know," Shipp said.

So I can't help but wonder, what if that myth somehow became tangible through either the power of the sheer belief of his followers or by some Flashpoint paradox? And if it did, how do you defeat a belief?

Savitar Is An Old Enemy Of The JSA

DC's Legends Of Tomorrow brought the Justice Society Of America into its mythology this year. The Legends run into the JSA in Paris in the midst of World War II, where they're serving, protecting, and training. Over at Den Of Geek, Mike Cecchini suggested that the Arrowverse opening the door to that era might mean that Savitar is a survivor of it. "I'd be cool with this Savitar simply being an earlier speedster, even this world's first speedster," Cecchini wrote. Maybe he was even an ally of the JSA at one time and had his psyche twisted over time. Which brings me to the most painful theory on the list...

In Legends, Barry Allen from 40 years in the future sent the Wave Rider a message warning them not to trust him. That message was forgotten pretty quickly in the crossover, seeing as there was an alien invasion to halt, and Barry seemed no different than the noble goofball they all know and love. But there's other evidence pointing to Barry as Savitar's true identity. Initially, only Barry can see Savitar. That's not insignificant. (He finally appears to Jay in the promo for the midseason finale, but that could be a deliberate choice on Savitar's part.) It would explain Julian's hatred if a future Barry is forcing him to create more metas. And as Reddit user Techteller96 wrote on the site's Flash board:

"A significant plot point in this season is that everyone has multiple sides to them (Caitlin/Killer Frost, Magenta, Julian/Alchemy, Wally/Flashpoint Kid Flash). Maybe the show is pointing to the fact that aside from the nice, kind and hopeful Barry, there can be a violent, savage and brutal Barry as well."

And if this last theory is accurate, prepared yourself for young Barry in existential crisis mode. How will he deal if he learns that over time, he becomes a maniacal, self-declared "god" who tries to kill the love of his life? It will make his Flashpoint guilt look like crying over spilled milk.

Whoever he is, Savitar is going to change everything on The Flash.