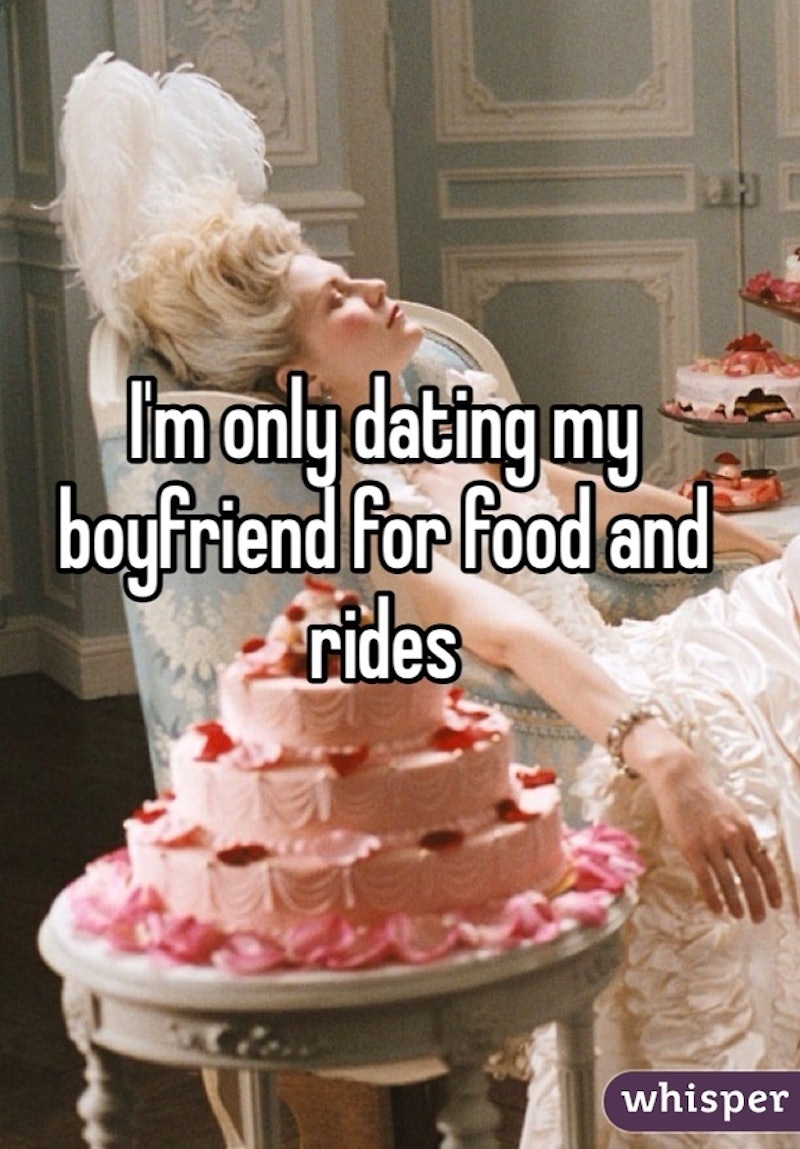 There’s a secret sharing app called Whisper that lets people create anonymous memes that reveal their secrets. As you can imagine, there are a lot of eyebrow-raising confessions on the app. There are paternity confessions that would make Maury Povich blush, sibling rivalry that is worthy of a medieval cable drama series, and workplace issues that make your employment woes all of sudden seem not so bad. But, as BuzzFeed points out, the confessions about dating are particularly WTF-ish. There’s no way to validate the claims of any of these “confessions,” (it’s basically just public therapy/venting/theater), but some of these stories do speak to issues many of us can relate to, regardless of how true the tales are. Some will definitely inspire a chuckle or two, others will make you take a closer look at your own life, and still others will make you recoil in sheer horror, disgust or sadness. Here are five of the the most thought-provoking dating-related Whisper confessions from BuzzFeed's list.

Ouch! The "wise" advice is often to start as friends for a while before you dive into a romantic relationship. It makes sense in a lot of ways, but what happens when you want the friend back, sans the romance? Nothing worse than ruining a great friendship over awkward sex or a lack of chemistry. Better luck next time, sister.

Funny and awful. I'm hoping this person is a college student and not a real life grown up. Of course it's not good to use someone at any age, but this mentality is at least understandable for a broke college kid who subsists on that barely food-like substance known as Ramen Noodles and squeezes in as the seventh person in a five-seater car to get around town.

Time out. What? I have so many questions. Do the authorities know that she killed her child? Did she go to prison? Did she kill the child before, during, or after this guy dated her? We all have our own dating deal-breakers. Some might seem silly and superficial, like a guy having to be a certain height. Other deal breakers seem more reasonable, like a guy must have a sense of humor. But a child killer? Pretty sure that little fact would knock her off of anybody's list of potential mates.

Nope. I know people "meet" online and carry on relationships from afar. I've seen an episode or 10 of Catfish. But there's no such thing as dating someone you've never met. To me, dating entails actual, in the flesh, face to face interactions. If you're someone who is in an online relationship with a person you have not met yet, you will go on your first date with that person once you do meet. So, it's possible to be "with" someone for years before a first date. Oh, Internet...

Like every other adult human with internet access, I Google people all the time and I do an especially thorough Googling when it's a potential suitor. So, if by "background check" this person is talking about Google research, then I'm all for it. If she's talking about real background checks that often cost actual money to conduct, then I would suggest slowing down on that. It's very easy for someone to create a whole other persona online, so I understand why folks would be apprehensive about allowing new people into their lives. But there has to be some type of basic trust there.