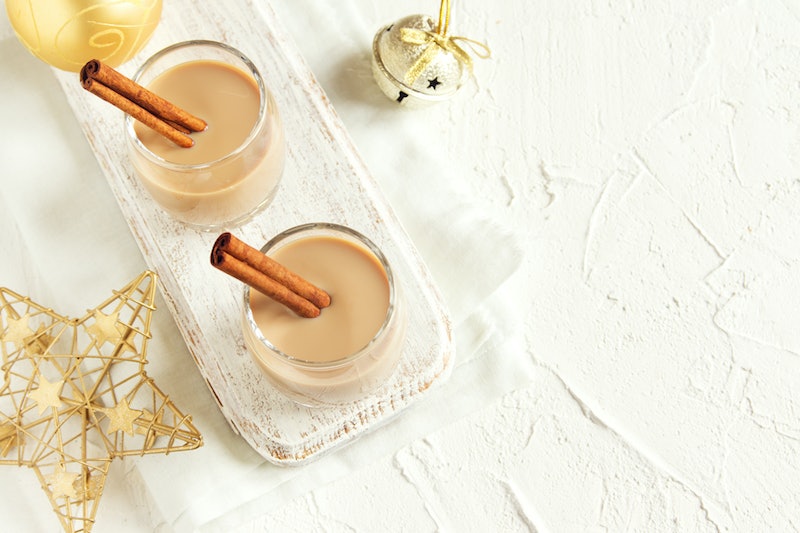 You either love it, or hate it, but there’s no denying it: Eggnog is essential to the holiday season. But why? Who decided that a frothy egg and milk beverage would be great to drink around the holiday season? And how did eggnog even get its name?

Surprisingly, eggnog has a very rich history — and not just because it's one of the richest-tasting drinks ever. As The Guardian points out, it originates from a dessert called posset, which is a milk curdled pudding doused with alcohol (typically sherry) that was heavily consumed during the 1200s. Over time, ingredients such as eggs, figs, and almonds were added to the dish, and posset became a treat of a more milkshake-y consistency. Back then, since eggs, milk, and sherry were known to be wealthy commodities, posset was almost treated as a delicacy — like, basically the champagne of the 13th Century, in the sense it was used for toasts and such. And what does one usually toast? The holidays!

Fast forward to the 1700s when the British hopped the pond to America, and brought their posset traditions along with them. At the point, according to TIME, since the dish had transformed so much, colonists used to order “egg-and-grog” when they craved their favorite milky-egg delicacy. “Grog” was another word for strong beer, which made sense since over time posset was served with other liqueurs such as whiskey and rum.

Some say that this could be where the term eggnog originates from, but as PBS points out, some historians have other theories. For example, some say that “nog” comes from the word “noggin,” which is actually a wooden mug that was used to serve their posset beverage. Others say that it could originate from Norfolk where strong ales were also served.

Although the word's origin is mostly unclear, what is well known is the fact that George Washington really enjoyed his eggnog, and even created his very own alcohol-heavy eggnog to serve to his guests at Mount Vernon. And when I say alcohol-heavy, I mean it: along with the sugar, eggs, and milk, Washington packed in brandy, Jamaica rum, sherry, and rye whiskey. What a party animal.

So, why is it tied to the holidays? Unfortunately, the reason why eggnog is enjoyed during holiday season remains a bit unclear. But, considering the fact that it's been around for hundreds and hundreds of years, and that it had some very famous fans, the drink is clearly a staple that's here to stay for many more centuries to come.