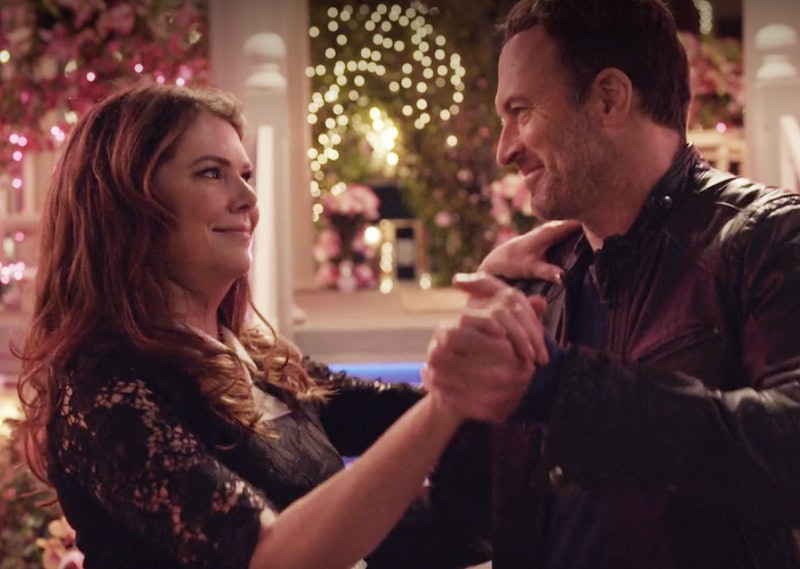 Even though it's almost two weeks since Gilmore Girls: A Year In The Life came out, discussion about the show is bigger than ever. One of the reasons for that is the shocking cliffhanger the series ended with, leading fans to demand that Netflix make even more episodes of Gilmore Girls . The revival was meant to provide closure, but instead it ignited a zillion questions. And beware, because there are spoilers ahead. Without a doubt, one of the most perfect aspects of the Gilmore Girls revival had to be Luke and Lorelai's wedding. After keeping us guessing throughout all four episodes, the pair finally tied the knot at the end of "Fall." But according to creator Amy Sherman-Palladino, Luke and Lorelai's wedding was originally meant to be a much bigger affair than it was.

“The wedding was originally a much bigger deal. The wedding was a whole shebang," she said to TV Line. "...Anything that has extras in it and costumes became a production nightmare. So we had to figure out how to make this wedding satisfying without doing ‘The Big Wedding.'”

Despite hearing that the wedding as seen in Gilmore Girls: A Year In The Life wasn't what was originally planned, most people will agree that Luke and Lorelai's big day was perfect in every way, especially as it felt so personal to the couple in question.

A bigger and more traditional wedding might have seemed out of place for the low-key Luke Danes. Instead, the magical fairytale wedding that the pair had, which saw Stars Hollow intricately decorated by the couple's friends and family, felt like the perfect fit for their personalities. Their idea to elope the night before the official wedding felt so right, and made "Fall" the most beautiful episode of the Gilmore Girls revival by far.

That the pair would end up together was never in question, with Sherman-Palladino telling TVLine, "We knew we had to get them married." The Gilmore Girls creator also conceded that taking the wedding in a different direction worked out well. She said, "In paring all of the bells and whistles away, we get down to the crux of really what it is: It’s Luke, Lorelai and Rory. And that made it intimate and gave it more feeling.” That intimacy made the whole sequence so satisfying to watch, because it made viewers complicit in the secrecy of Luke and Lorelai's wedding. And it was definitely worth the wait.

While Luke and Lorelai got their happy ending, finally, Gilmore Girls: A Year In The Life left fans with so many questions. Fingers crossed that Netflix decide to make even more episodes, because we all need more Luke Danes on our screens.