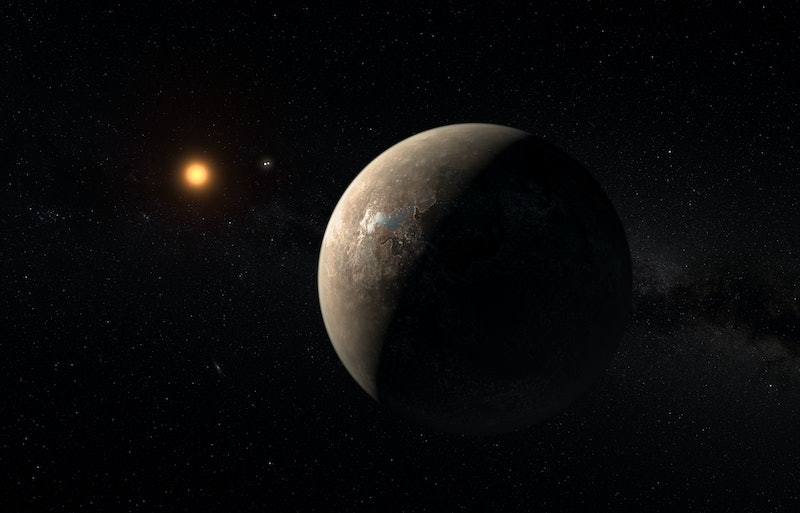 Nibiru, a supposed rogue planet allegedly on path to destroy Earth, has been making headlines lately for... obvious reasons. Upon hearing this doomsday theory, no doubt many of us have turned our eyes to the sky wondering one thing: Can you see Nibiru? If you can, you're really, really, really special — because the darn thing doesn't actually exist.

But let's back up for a moment. Nibiru — supposedly an enormous planet flying through the outskirts of our solar system — first came to light in 1995, Nancy Lieder wrote on the website Zeta Talk that aliens warned her of the upcoming disaster. Over the years, Nibiru was predicted to destroy our planet in 2003, 2007, 2012, and 2015. Now, I can't be positive, but I'm pretty sure it still hasn't actually happened yet.

The two theories surrounding Nibiru were that it would either pass between Neptune and Mars and cause a mass extinction on earth, or that it would collide into our planet directly. The discussion surrounding the doomsday theories about Nibiru became so widespread that NASA eventually addressed it, pointing out that there's no evidence that Nibiru actually exists. They added that if this were even a remote possibility, astronomers would've started following it at least a decade ago, if not longer. Also, it would now be visible to the naked eye. Which it is not. Because it does not exist. So, my friends, you can rest easy: This doomsday theory has been debunked. Many times. You can't see Nibiru, from Earth or from anywhere else.

Now that we've established that you, in fact, cannot see the not-real planet Nibiru which will not destroy Earth because it doesn't exist, I feel it necessary to address one piece of related information that could be true: The existence of a ninth planet, aptly known as Planet Nine. First seriously proposed in 2014, Planet Nine is predicted to be a planet roughly 10 times more massive than our own — a hypothetical body orbiting somewhere in the outer solar system. And many astronomers are convinced that this one, at least, might exist.

A number of bodies in space well beyond Pluto — including the dwarf planet Sedna — all share bizarre orbital characteristics. These characteristics could quite logically be explained by the existence of some giant planet we haven't yet discovered — which is where Planet Nine comes in. Furthermore, other research has found evidence that this new planet has actually tilted the orbits of our eight official planets by six degrees! Many scientists have come to similar conclusions, and the evidence in support of Planet Nine has continued to grow.

I suspect that the not-real doomsday theory of Nibiru may gain some of its fuel from the potentially real idea of Planet Nine — largely because Nibiru actually goes by two other names, one of which is also Planet Nine. (The third is Planet X.) Could this potentially real Planet Nine be the massive body that's going to end Earth?

Again, though, the answer is no. If Planet Nine were anywhere near Earth, with its size, scientists would've spotted it by now. In October of 2016, Mike Wall at Space.com did note that astronomer Mike Brown believes Planet Nine will be officially discovered within the next 16 months; until then, though, it's still hypothetical. And also, even if it's discovered in 2018, then... well, it won't exactly have destroyed Earth in 2016, then, will it have?

All this talk of the end of the world, though, is still just that: Talk. In fact, our planet was supposed to split open (!!!) and mark the end of time on Oct. 31, but — wait, let me check — nope, we're still here. I understand our obsession with determining our end of days, though. It only makes sense, particularly after the 2016 election.

But let's recap. Nibiru: Not real. Earth: Not ending. Planet Nine: Could actually be a thing. Oh boy!

More like this
13 Summer Solstice Quotes To Celebrate The Longest Day Of The Year
By Sadie Trombetta
The Summer Solstice Spiritual Meaning, Explained
By Jessica Booth and Brittany Beringer
The Guide To “Witches Stairs” & Why They’re Actually Great For Small Spaces
By Emma Garza
Side Character Energy Has Arrived — Here’s What That Means
By Sophie McEvoy
Get Even More From Bustle — Sign Up For The Newsletter