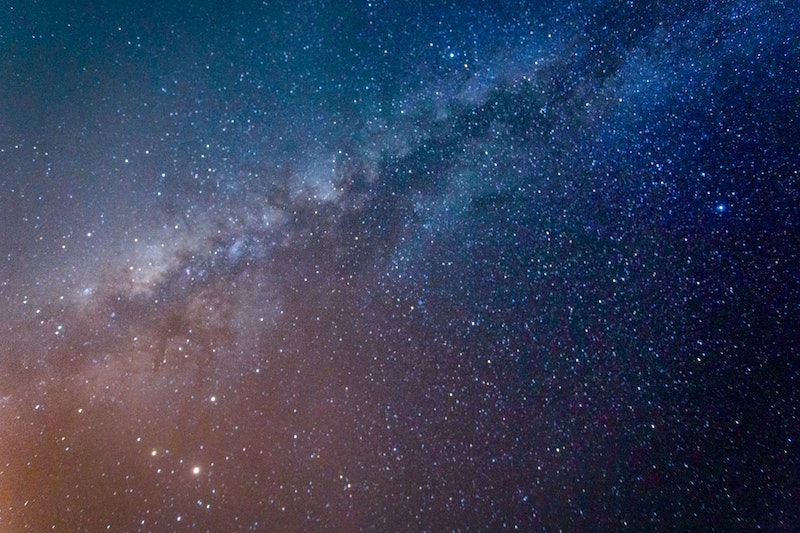 When it comes to doomsday theories, there's no shortage of ways people theorize that the end of the world is coming — including one centering around Nibiru, an extra planet that's allegedly supposed to crash right into Earth this month. What I'm most curious about is what "Nibiru" means rather than whether or not the prediction itself is going to come true (largely because the theory has already been proven false). Besides, the history behind a single word can often provide a lot of context for what's hypothetically in store for us and where the idea of a fatal fist bump between two planets even came from.

To start us off, Nibiru is another name for Planet X or Planet Nine, a planet many times the size of Earth which supposedly visits our solar system every 3,600 years or so. And when it does, well, Earth is allegedly in for a rude awakening. I'm talking about the most catastrophic collision-slash-reverse "big bang" you can think of — the end of all things for us here on Earth, essentially.

There's no need to be scared of a real cataclysm, though; people have been freaking out over the Nibiru theory since the 1990s. Specifically, Niribu was expected to hit Earth in 2003, 2007, 2012, and 2015... and yet it never came to pass. A lot has happened during this year, sure, but I'm thinking December 2016 isn't going to be so horrific as to usher in the end of days.

No, seriously. We're going to be fine.

The word "nibiru" itself is derived from an ancient Mesopotamian language called Akkadian, and it's also a term in Babylonian astronomy. It's been used in a few different contexts to mean a "place of crossing," "crossing fee," a "ferry boat," and "to ferry." So I think it's fair to say that "nibiru" is typically relates to navigating across some amount of distance. It's also been used in reference to gods and stars, sometimes in the act of crossing the skies. (See where we're going with this? History never ceases to amaze me.) People have even called other planets, like Jupiter, "Nibiru," even though Nibiru is technically meant to be a ninth planet beyond Pluto (hence one of its other names, "Planet Nine").

So, planets, gods, ferrying... it's not hard to guess how the meaning of Nibiru went from stars crossing the heavens to a catastrophic celestial event ending with Earth's demise. I'm not quite sure how to even pronounce the darnn word (it's somewhere between "nih-by-roo" and "neh-ber-roo," from what I gather), but if you ask me, Nibiru, sounds like a Neopet species rather than the planet that should be responsible for our collective downfall.

Don't get me wrong. I'm all about doomsday theories. Remember when everybody thought the world was going to end in 2012? I was so excited to watch the movie The Day After Tomorrow in 2009; it actually remains one of my favorite flicks. But I never really believe in doomsday theories, mostly because there's not much evidence for them — and because, again, they've been proven false time and again. And, honestly, even if Nibiru was real and we're all about to get annihilated, it's not like we'd have any way of stopping it, right? At the end of the day, none of us are going to be around forever. If it's not a giant ball of fire, it'll be something else — hopefully several years down the road, of course.

More like this
Meet The Disney Imagineer Bringing 'Guardians Of The Galaxy' To Epcot
By Charlie Mock
Michael & Kathleen Peterson’s House From ‘The Staircase’ Has New Owners
By Kadin Burnett and Kayla Blanton
15 Ways To Tell Someone Was Just Talking Behind Your Back
By Carolyn Steber
Here's Your Daily Horoscope For May 16, 2022
By Mecca Woods
Get Even More From Bustle — Sign Up For The Newsletter