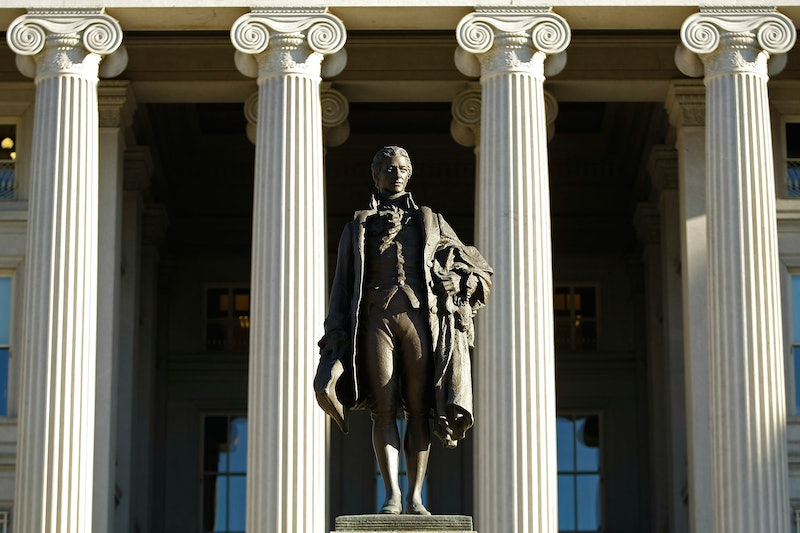 The official end of the 2016 election is approaching, and the Electoral College is getting ready to perform its duty. On Dec. 19, electors will gather in their respective states to cast their vote for president. The possibility of stopping president-elect Donald Trump's confirmation has centered mostly on the possibility of Republican electors going rogue as "faithless electors" and voting against their party's wishes. But there's also a group of left-leaning electors trying to prevent Trump's election, and they've taken on a historical name. You may be wondering why electors chose the name Hamilton Electors?

The name is taken from Alexander Hamilton's opinion of the Electoral College and its responsibilities. As stated in Hamilton's Federalist Paper No. 68, "The process of election affords a moral certainty, that the office of President will never fall to the lot of any man who is not in an eminent degree endowed with the requisite qualifications." In the wake of Trump's election, two Democratic electors decided they needed to fight back, and therefore created the Hamilton Electors.

The group believes that Hamilton's fear of electing an unqualified candidate applies to Trump. The goal is to elect a moderate Republican in Trump's place. Names of potential alternative candidates floated around have included Mitt Romney, John Kasich, and Colin Powell. According to The New Yorker, which profiled some of the group, they first considered the name "moral electors" before settling on "Hamilton Electors."

While the seven Hamilton Electors who have publicly announced themselves as such are decidedly Democratic, several Republican members of the Electoral College have also spoken out against voting for a Trump presidency. On Monday, Republican elector Christopher Suprun declared in a New York Times editorial his plans to not cast his electoral vote for Trump. At the end of November, Texas Republican Art Sisneros announced he was resigning from his position as an elector after considering a vote against Trump.

Despite the liberal makeup of the group, the Democratic party has stayed out of the conversation for the most part. According to Politico, both the DNC and the Clinton campaign officials have declined to comment on the electors' plans. Meanwhile, the Green Party has gone to work on recounts in several key swing states like Pennsylvania, Wisconsin, and Michigan. And with Clinton leading by several million in the popular vote, it's difficult not to wonder about the possibilities of a change in outcome.

Considering the Hamilton Electors are Democrats and therefore wouldn't have contributed to Trump's 270 Electoral College votes to win anyway, there's little hope that they'll actually affect anything. At this point there's not much time to sway enough Republican electors committed to Trump against voting for him, but the concern across party lines post-election truly shows the divisiveness of this election, and Trump himself. The fact that there are groups of people forming to halt the election of Trump is a scary consideration and something that shouldn't be taken lightly.