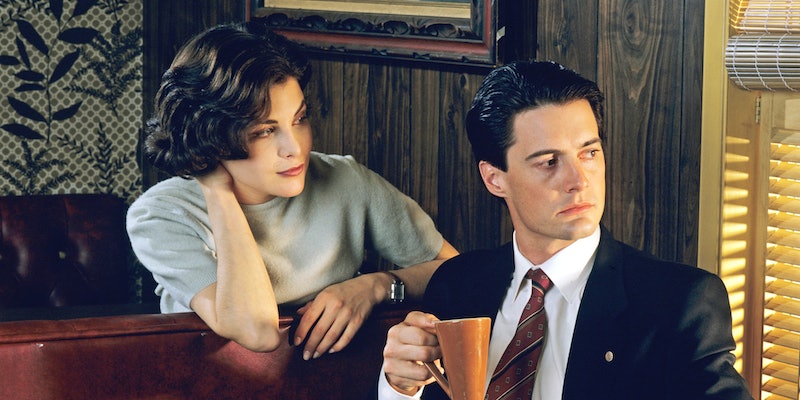 In case you missed the news, allow me to remind you: Damn Fine Cherry Pie, the unofficial Twin Peaks cookbook, is perfect for 90s kids looking for a little nostalgia to fire up their kitchens. Filled with recipes from the TV show's major locations — including both the White Lodge and the Black Lodge — superfan Lindsey Bowden's cookbook also includes instructions for throwing your own Twin Peaks dinner party, complete with fashion suggestions, music selections, and fun activities inspired by David Lynch's cult-classic series.

For those with only a marginal understanding of what Twin Peaks is about, here's a little backstory. The show premiered in 1990 and starred Kyle MacLachlan as Dale Cooper, an F.B.I. agent sent to the logging town of Twin Peaks, Washington to investigate the murder of a high school student named Laura Palmer (Sheryl Lee). What begins as a merely muddled investigation soon descends into an exploration of the conspiracies and family secrets that underpin the Pacific Northwest town.

Told with a healthy dose of Lynch's signature surreality and black comedy, Twin Peaks was canceled after its second season, but re-emerged with a prequel film, Twin Peaks: Fire Walk with Me, in 1992. A Twin Peaks revival series, featuring most of the original show's principal cast, will premiere on Showtime in 2017.

Twin Peaks fans know that food plays a huge role in the early-1990s TV show. Cooper and the local police force routinely chow down on doughnuts and coffee, and the seedy Horne brothers love a good butter-and-cheese sandwich on a crusty baguette. At the Double R Diner, owner Norma Jennings and waitress Shelley Johnson serve up burgers, fries, and hearty helpings of pie.

For Twin Peaks U.K. Festival founder Bowden, who tells me she has been a Twin Peaks fan since the show premiered in 1990, the union of Lynch's short-lived TV show and a mainstream cookbook made sense. After she was approached by Octopus Books, Bowden got to work on "us[ing] the world of Twin Peaks to its fullest" to create Damn Fine Cherry Pie:

[T]hat meant using the characters, the locations, and the storylines. So of course some of the recipes were obvious, such as the pies [and] donuts ... [B]ut in going deeper and re-analyzing the TV show, I was able to create chapters that were characters themselves and place the correct recipes in their correct chapters.

That's why you won't find Leland Palmer's Buffalo Joint among recipes from The Great Northern Hotel, where we first meet him in the pilot episode, but in the Black Lodge Supper Club chapter, where it's "all about the power of seduction and [the] grandiose through food."

Don't let that elevated recipe frighten you, though. Damn Fine Cherry Pie contains recipes for cooks at any skill level. Bowden singles out Windom Earle's Beer-Marinated Pork Belly as a particular favorite, but also declares that "the Coconut Cheesecake is divine!"

Another beloved recipe for Bowden is Margaret Lanterman's Chocolate Chestnut Log, not only because it's delicious, but also because "Catherine Coulson ... was a lovely friend and a big supporter of the Twin Peaks U.K. Festival, so I'm glad I was able to honour her in this way." Coulson passed away in September 2015, at the age of 71, and was best known for her role as Margaret Lanterman, Twin Peaks' resident "Log Lady."

In true Twin Peaks style, Bowden also included a recipe for Lucy Moran's Coffee Doughnuts, which she and Harper Design have allowed us to share below. Try the recipe for yourself, and let us know how your batch turns out.