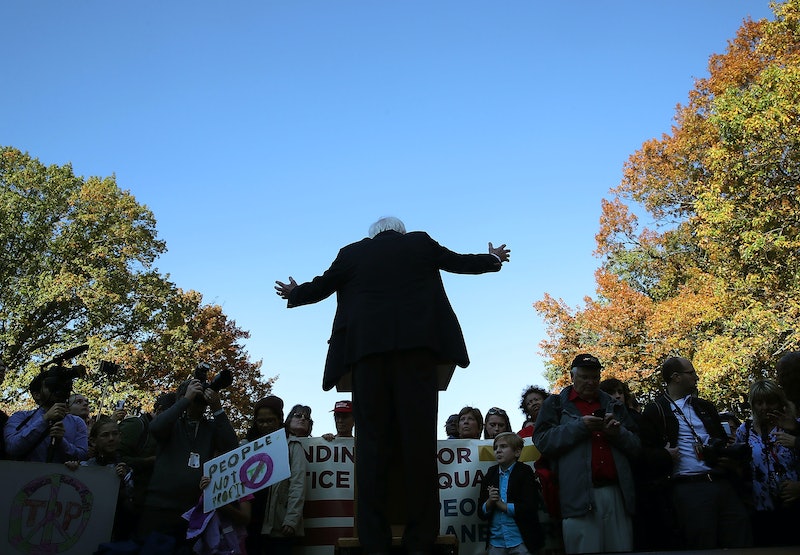 As this dumpster fire of a year burns to a close, we look back at 2016 in search of the brighter moments. Believe it or not, there were those glimmers in time that gave us a brief respite from the political maelstrom we were constantly entrenched in —and many of them came from a certain Vermont senator, Bernie Sanders. With his unpolished demeanor and idealistic policy proposals, Sanders definitely made 2016 a bit more bearable.

The Democratic candidate for president didn't make it as far as he'd hoped, but arguably, he did start what he called a "revolution," and ran a campaign that very much stuck to the principles he outlined at the get-go. When Sanders announced he was running for president, he said "Today, with your support and the support of millions of people throughout this country, we begin a political revolution to transform our country economically, politically, socially and environmentally." Sanders largely focused on income inequality and supporting the lower and middle class. The Vermont senator said he would not take corporate money, and he did not have a super PAC.

From his clothes and hairstyle to his volume and manner of speaking, Sanders stayed true to himself throughout the campaign, and that resonated with people. Here's a look back at the moments when Sanders made 2016 a little less awful.

Hillary Clinton couldn't shake the issue of her private email server during this election. At the first Democratic debate, Sanders made a bold move to declare that "the American people are sick and tired of hearing about your damn emails!" In retrospect, it probably wasn't the greatest idea politically, but people were impressed with his desire to stay on the issues and not let the Clinton's emails derail a substantive debate.

At a rally in Portland, Or. in March, Sanders had a surprise visitor. Sanders channeled a Disney princess when a bird flew onto his podium and perched there, as the crowd went wild. "I think there may be some symbolism here," Sanders said, who at the time was falling behind in the primary race.

3. The passion of his grassroots campaign

Sanders' campaign did not exactly have the infrastructure that Clinton's did, but he showed that doesn't matter as much as we thought. No matter what you think of his politics, you have to give Sanders' credit for his ability to mobilize grassroots support. The majority of his campaign contributions were small donations for supporters, and Sanders' rallies regularly attracted thousands of supporters.

The uncanny resemblance between Sanders and comedian Larry David made for comedy gold on Saturday Night Live last season. Often called upon to reprise the Sanders role, David played up the politician's signature demeanor. And yes, this isn't the real Sanders, but it was still one of the best moments of the year. Sanders did, in fact, appear on SNL in February, where he he played a Titanic passenger, and got to preach his thoughts on income inequality.

Sanders is not known as a polished politician, so his wild, wispy white hair looked somewhat out of place in the landscape of presidential candidates. As did his gesticulating and loud, gravely Brooklyn-accented voice. He didn't moderate his goals or his style throughout the campaign, and that decision made it all the more memorable.