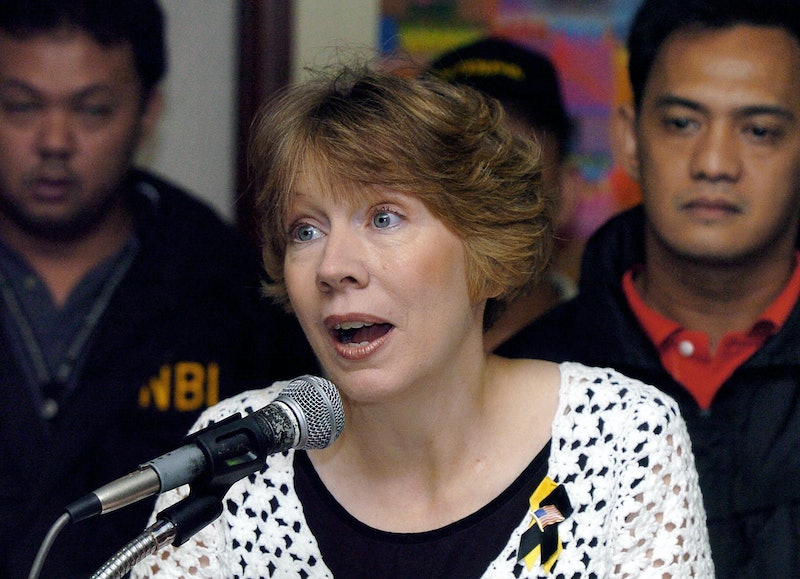 On Friday, Dec. 9, Netflix unveiled its latest true crime undertaking: Captive , a harrowing examination of real-life hostage situations that’s been touted as the next Making A Murderer. One narrative it traces is the Dos Palmas kidnappings of 2001, during which American missionaries Gracia and Martin Burnham — among others — were taken captive by one of the Philippines’ most violent terror groups, Abu Sayyaf. After over a year spent in a jungle rife with enemy crossfire, Gracia was rescued on June 7, 2002. But nearly a decade and a half later, you may be wondering what Gracia Burnham is doing now.

Millions had followed her story by the time she was set free, and Gracia returned to her home of Kansas amidst a national spotlight. In the ensuing years, she authored two books: 2003’s In The Presence of My Enemies and 2005’s To Fly Again. The first, a New York Times best-seller, is a gripping personal account of her 12 months trapped on Basilan Island under the militant control of her captors. The second is a hopeful follow-up, reflecting on the insight gained from that horrendous living nightmare. According to her website, she also launched a foundation that supports several charitable organizations, and has since built a career as a motivational speaker for churches, conferences, and schools.

It’s important to acknowledge how remarkably she’s recovered from such a grueling tragedy. As the docuseries shows, Martin was her anchor during their year under Abu Sayaba’s merciless regime. When she was hopeless, he’d tell her to push on. “Just one more hour,” he’d say, even though there were many. During a rare interview with a local journalist before their release, he was shown steadfast, poised, and staunchly optimistic, determined to return home to his family. By the time they were saved, only Gracia, Martin, and one other hostage remained — most were let go, the rest were killed. But, Martin didn’t survive the rescue operation. He was shot three times in the chest, and died as Gracia lay nearby. She was wounded, but survived.

One can only imagine how agonizing it would be to watch your husband lose his life, let alone on the cusp of freedom, just after surviving a brutal, drawn-out hardship. But in Captive, Gracia says she isn’t haunted by the experience, nor does she want to forget it. In fact, she laments not remembering every detail; those memories are all she has left of Martin.

The show grants few glimpses into her current life, but one thing is clear: Gracia is one strong woman. She spent 17 years serving in Filipino missionaries, where she home-schooled local children and supported the aviation program, among many other things. Then, after one of the most trying, torturous ordeals conceivable, she refused to be victimized by her past. Instead, she dedicated her life to sharing her story and the many lessons she took from it, and that’s a journey worth learning from.