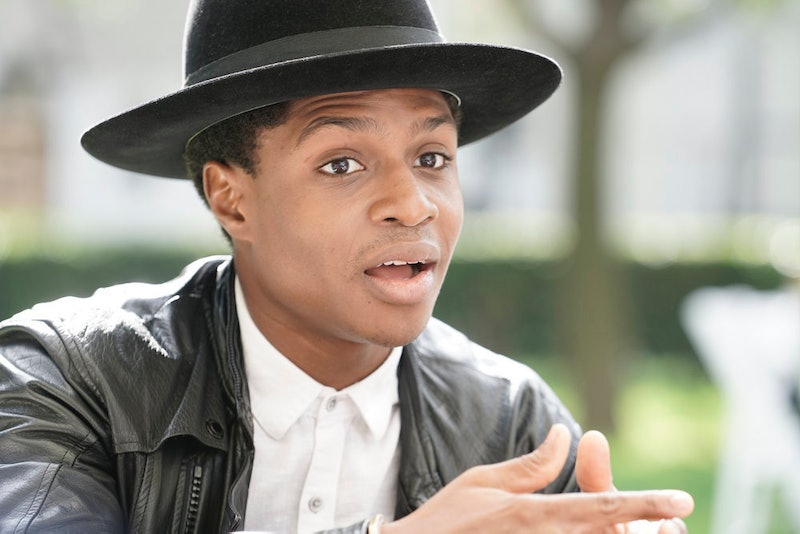 Live televised musicals get viewers excited with big names and pop stars taking on iconic theater roles for one night only. However, it's often the Broadway veterans in supporting roles, like Christian Borle and Laura Benanti, who end up stealing the show. Who will do that this time around? My guess is that Ephraim Sykes, who will play Seaweed in Hairspray Live!, will be the one that everybody's talking about.

The role of Seaweed Stubbs was originated on Broadway by Corey Reynolds, and portrayed in the 2007 film by Elijah Kelley — who played the Scarecrow last year in The Wiz Live! on NBC. Sykes is not the only stage actor to join the cast. Tony award winner Kristin Chenoweth is playing Velma Von Tussle. Harvey Fierstein is reprising his own Tony award winning role as Edna. Andrea Martin and Martin Short have a shelf full of Tonys as well. Jennifer Hudson made her Broadway debut in The Color Purple. Before achieving pop fame, Ariana Grande was in the cast of 13 on Broadway. Finally, Derek Hough's Broadway debut is coming up with a stage adaptation of Singin' In The Rain. This cast is pretty stacked with Broadway talent.

That said, Sykes has been working his way up the musical theater ladder for a while, and it shows. You may already recognize him, and here's why.

He was an ensemble member and played George Eacker in Act II who, without giving anything away from the hit musical, is featured in the song "Blow Us All Away." Sykes additionally understudied the dual (not duel) role of Hercules Mulligan and James Madison. He previously appeared on Broadway in Motown, The Little Mermaid, Memphis, and Newsies.

Meanwhile, Jordan Fisher, who definitely blew us all away during FOX's Grease Live!, recently joined Hamilton on Broadway in the role of John Laurens and Phillip Hamilton. The circle continues!

You may also recognize Sykes from the HBO series, in which he played Marvin, an employee at American Century record company. The '60s and '70s do seem to be a lucky era for him as an actor. He was in a crucial flashback on Luke Cage rocking a similar aesthetic. Sykes was also a featured dancer on Smash, and had guest-starring roles on 30 Rock, Crisis in Six Scenes.

Leave It On The Floor

Finally, the triple threat starred in this indie musical film set in the early days of vogueing. So he's more than prepared to take on a role like Seaweed, who is both a romantic lead and a catalyst for change in Baltimore. Hairspray Live! is lucky to have him, for sure.

More like this
“The Door Is Always Open” For Another 'Breaking Bad' Spin-Off, Says AMC Boss
By El Hunt
Sadie Sink Would Escape Vecna From 'Stranger Things' With This Taylor Swift Song
By Grace Wehniainen
Zooey Deschanel Can't Be Anyone But Herself
By Samantha Leach
Kate Bush Reacts To “Mad” Revival Following 'Stranger Things' Cameo
By Sam Ramsden
Get Even More From Bustle — Sign Up For The Newsletter