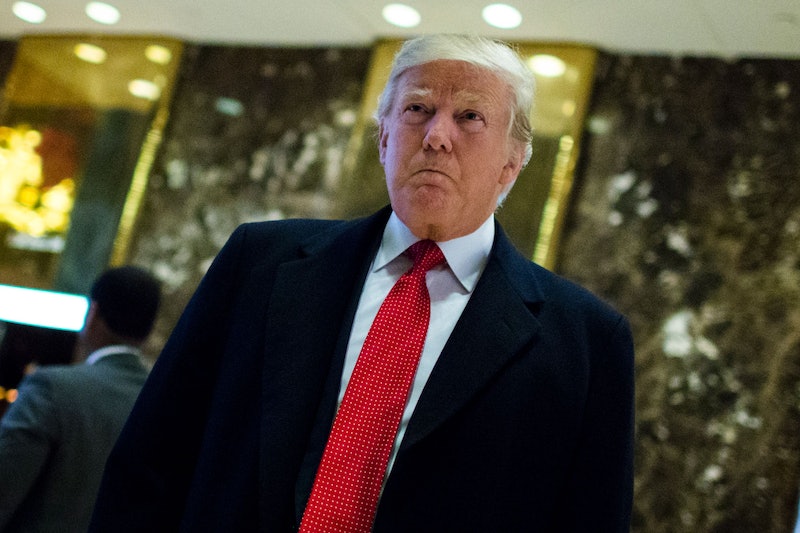 On Wednesday, TIME magazine announced that Donald Trump is TIME’s Person of the Year. The statement came alongside the release of the magazine’s latest cover, featuring a shadowy image of the controversial President-elect. A montage of Donald Trump’s TIME covers from this year encapsulates the bizarre narrative of Trump’s rise, from a time when him winning the presidential election seemed all but impossible, to, well, where we are now. For those of us still struggling to come to terms with the results of the election, the montage is a powerful reminder of how much things can change in the space of only a few months.

This latest TIME cover is far from Trump’s first. This year alone, photos or illustrations of him have graced the front of the magazine eight times. In fact, TIME’s opening issue for January of 2016 featured a photograph of Trump at a rally with the words, “HOW TRUMP WON: Now He Just Needs The Votes,” in reference to the then-candidate’s lead in the Republican primaries. The headline now seems shockingly prophetic.

The montage, posted by Twitter user Jawn Snow, shows two memorable TIME covers alongside the latest “Person of the Year” portrait. The first hit newsstands in late August, after a rough Republican National Convention and a bad month for the Trump campaign.

In the preceding weeks, Melania Trump had been accused of plagiarizing a speech by First Lady Michelle Obama in her RNC speech; Trump had gotten into a public, ugly quarrel with the Gold Star family of fallen soldier Humayun Khan; he had refused to endorse prominent Republican Paul Ryan, alienating many members of his own party; he had encourage Russian hackers to delve into Hillary Clinton’s emails; and he had suggested that “Second Amendment people” could intervene if Hillary Clinton were elected.

TIME’s cover responding to the controversies was simple: An illustration by artist Edel Rodriguez of Trump’s face, literally melting, with the single word, “Meltdown.”

If you followed the election at all (or were simply a human in the world at the time), you know that the events of the summer were far from the last controversies to erupt during Trump’s campaign. In October, TIME revisited the “Meltdown” cover after a series of seemingly-damning events for Trump: The release of the Access Hollywood video showing him bragging about sexually assaulting women; a stream of accusations from multiple women that Trump had sexually harassed them; Trump’s erratic performances in his debates against Hillary Clinton; and a number of Republicans rescinding their endorsement of the candidate.

For the new cover, TIME had Rodriguez return to the “Meltdown” illustration and take it further — instead of Trump’s face melting, the cover shows him as a liquid puddle on the floor. The caption: “Total Meltdown.”

Looking at these covers alongside President-elect Trump’s “Person of the Year” cover is jarring, to say the least. Many people (myself included) were utterly confident that Trump’s “Total Meltdown” meant that he would never make it to the White House, and yet, here we are, in our very own dystopian future.

The ironic thing here is that, if you follow TIME’s narrative of the election, it’s around the time when the “Total Meltdown” cover came out — when Hillary Clinton’s win seemed all but assured — that the Clinton campaign made a fatal error that contributed to Trump’s shocking victory in November. In his “Person of the Year” article about Trump, TIME’s Washington Bureau Chief, Michael Scherer, points out that, for much of the campaign, Clinton delivered a crucial message about the American economy, assuring voters that she would work to protect American jobs and lift up American workers who felt they had been forgotten by leaders in Washington.

However, in the final weeks of the campaign, provoked by Trump’s unprecedented and offensive behavior, Clinton changed her strategy. “No presidential candidate in American history had done or said so many outlandish and offensive things as Trump,” Scherer writes. “… For a Clinton campaign aiming to re-create Obama’s winning coalitions, all of this proved too large a target to pass up.” Scherer argues that Clinton shifted her message away from the economy to focus instead on “a moral argument about Trump’s character.” And though the move was successful for some voters (she did, after all, win the popular vote by 2.5 million), it hurt her in the crucial Rust Belt region (especially in Michigan, Ohio, Pennsylvania, and Wisconsin) and, Scherer suggests, ultimately cost her the election.

Looking at these TIME covers side by side highlights the strange imperviousness of Donald Trump, a man who has, somehow, weathered controversy after controversy without penalty, a man with an endless stream of offensive statements and scandals that would likely tank another politician’s career, but that only seem to bolster his popularity. However you feel about the President-elect, that Teflon-like power certainly makes him a “Person of the Year” for 2016 — for better or for worse.

More like this
5 Ways To Stand In Solidarity With Women In America From The UK
By Sophie McEvoy
How To Fight For Reproductive Rights, Based On How Much Time You Have
By Courtney Young
How Getting An Abortion Has Changed From The ’60s Through Today
By Amanda Chatel
How To Protect Your Digital Privacy If You Need An Abortion Post-Roe
By Kaitlyn Wylde
Get Even More From Bustle — Sign Up For The Newsletter