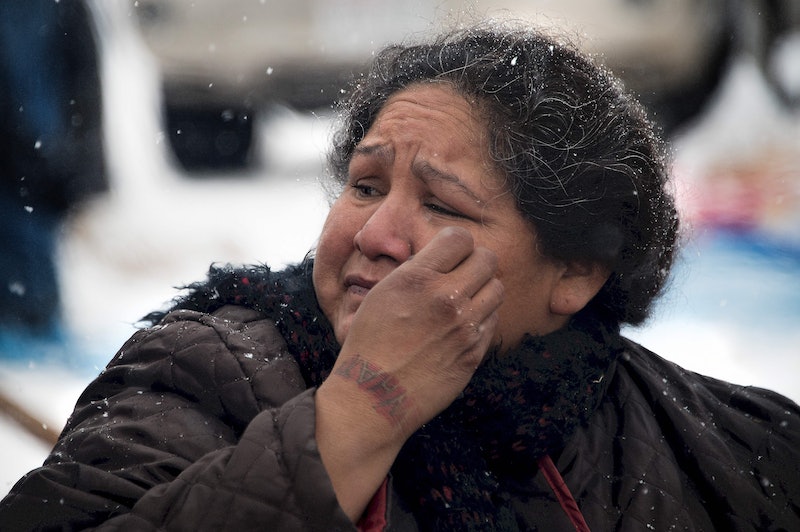 TIME Magazine released its annual "Person of the Year" list on Tuesday, and unsurprisingly, president-elect Donald Trump was chosen as the most influential person of 2016. Trump undoubtably dominated news cycles and provoked a lot of tough national dialogue and introspection in 2016, but another group of people who accomplished the same thing was conspicuously left off the list. The Standing Rock protestors should've been on TIME' s "Person Of The Year" list for their ceaseless commitment to bringing awareness for indigenous rights and the country's environmental crisis, a far more important and underserved cause for coverage than Trump.

Although some people only heard about Standing Rock in recent weeks as the conflict finally escalated to its turning point, many others have been following the situation since shortly after the first protesters arrived. Since April, millions have watched as the government protected corporate interests over Native treaties, and profits over the environment. The protests are a combination of pure environmentalism and indigenous rights, which, for many Native tribes, go hand in hand. LaDonna Brave Bull Allard, the creator of the Sacred Stone camp where the water protecters have lived for the last several months, explained in a powerful op-ed back in October why the river means so much to the Standing Rock Sioux.

"Where the Cannonball River joins the Missouri River, at the site of our camp today to stop the Dakota Access pipeline, there used to be a whirlpool that created large, spherical sandstone formations... [The] U.S. Army Corps of Engineers dredged the mouth of the Cannonball River and flooded the area in the late 1950s as they finished the Oahe dam. They killed a portion of our sacred river," wrote Allard for Yes! Magazine on the 153rd anniversary of the Whitestone massacre . "I was a young girl when the floods came and desecrated our burial sites and Sundance grounds. Our people are in that water. This river holds the story of my entire life."

Yet the water protecters, despite the historical precedent of discrimination by the federal government, claimed a massive victory this week by pressuring the Army Corps of Engineers to deny the appeasement permit for the pipeline. The Standing Rock Sioux achieved something few Native groups have in the entire course of American history — a substantial win against the U.S. government and private corporations. The blatant racism, public complacency, and bureaucratic inefficiency the protestors were able to overcome was astounding, particularly because it happened in 2016. On it's own, the treatment of the water protectors at Standing Rock by local and federal government deserves attention and scrutiny by one of the country's most respected news publications. In direct comparison to Trump, the radical nature of the protest and the Standing Rock Sioux's victory is actually a lot more newsworthy than the election.

In a world where Trump is the Person of the Year, it would have been an appropriate counter-balance for the Standing Rock Sioux to be named to the list as well. The Standing Rock movement is the opposite of everything that Trump represents — it showed the power of people working together and uniting for good, to protect the environment and marginalized peoples. Moreover, it's way more important to listen to these marginalized voices and give them a mainstream platform for the critical issues they are trying to address than to dispassionately assess the news of the year and choose the list based on who had the most influence in general.