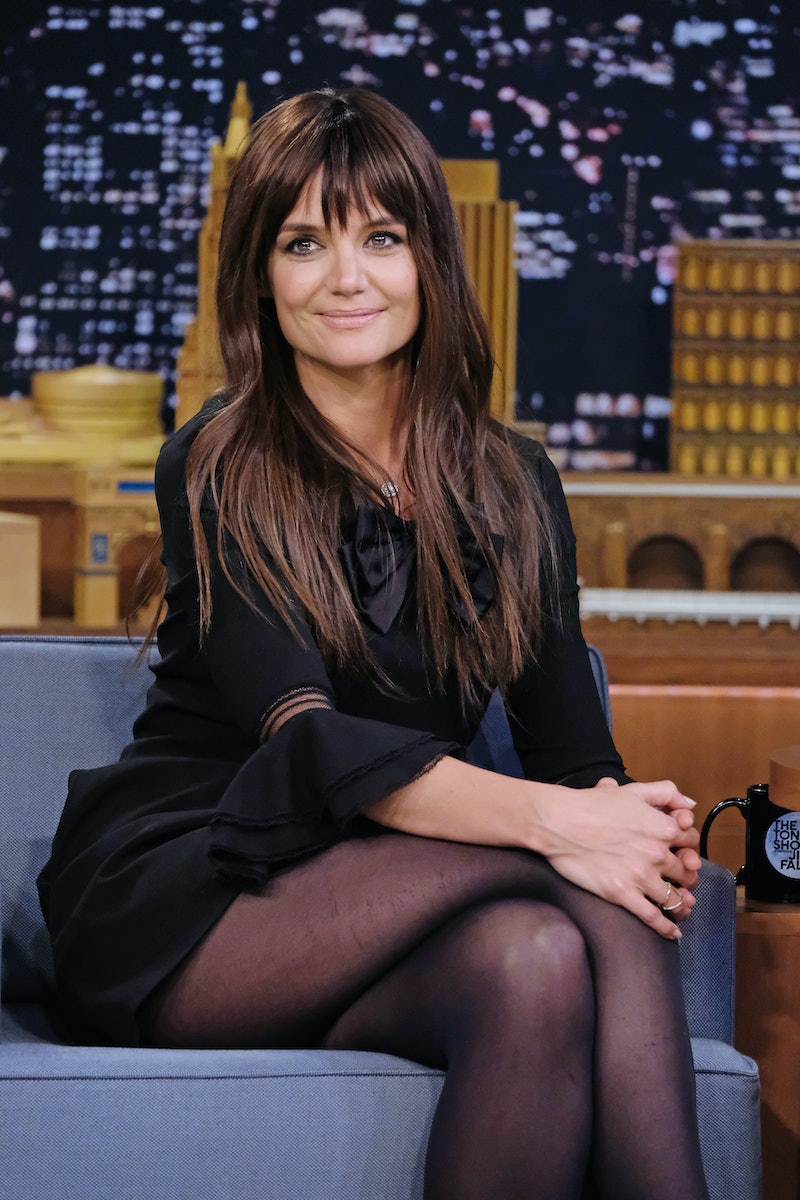 If hearing the mere intro to Paula Cole's "I Don't Want To Wait" is enough to spiral you straight into a swoon of nostalgia, then you may also be wondering whether a Dawson's Creek reunion is going to happen. And honestly, you might want to make sure that you're sitting down for this, because according to Katie Holmes (who played Joey Potter on the show), the chances of that happening aren't looking too high. Speaking as a guest on the Just Jenny podcast, Holmes killed the dream of a Dawson's Creek revival and stated, "I don't think we're going to do a reunion ... I think that the charm of the show was Kevin Williamson's writing and it was of that time and it gave teenagers this voice." And guys, that voice is now gone.

Holmes also told host Jennifer Hutt that she "loved every minute" of starring in the show and described it as being "a very special time," because clearly she's determined to make me sniffle out a cry today. Though it's disappointing that a Dawson's Creek revival might potentially never happen (especially in a time renowned for show revivals), I'm also a little relieved to hear the news.

I'd obviously also love to catch up with Pacey Witter (always a pleasure) and see whether Dawson Leery has managed to chill out a little, but I can't help but feel that Holmes is completely right in her comments. The show was very much of it's time, and I feel like a revival would only amplify that fact.

Like many other fans of the show, I love a good old Dawson's Creek re-watch, but that doesn't mean to say that I'm eager to revisit the same characters as fully fledged adults in the modern world. Unlike many other shows I obsessed over as a teenager (such as Gilmore Girls , the recent revival of which was most definitely necessary), Dawson's Creek is one which is unequivocally a product of the late '90s. The entire show swaggers with the youthful angst of that time and, as a result, is wordy and provocative and quaint yet sexy.

The show is like the TV equivalent of a high school lover who totally won your heart back then, despite trying a little too hard to be cool. Sure, you adored them and you always will, but do you really want to rekindle things with them as an adult? Of course not. Because there are some things that simply can't be recaptured as you grow up. And a Dawson's Creek revival has the potential of failing to recapture that initial magic fans originally fell in love with, and that's just not something my heart can handle.

The fact that a revival could make the show feel incredibly dated (and myself incredibly old), is one thing, but another is that the finale of Dawson's Creek already feels like it brought the closure that a potential revival would strive for. For one thing, the episode was already set in the future (five years, to be exact) showing how each character had grown, and where their lives take them next.

Along with Joey's career taking flight and her realization that Dawson was her buddy-soulmate but Pacey was the love of her life, the episode also delivered a devastating death as Jen Lindley died of a rare heart condition. The finale tidily (and emotionally) wrapped up every character's life and their future trajectories in such a manner as to make a potential revival redundant. In an interview with Entertainment Weekly, the shows creator Kevin Williamson also rejected a possible Dawson's Creek revival and cited these exact reasons as to why:

"We joked about it then: 'What’s gonna happen if we do the reunion movie? Jen’s dead.' 'Well, she’ll be in heaven narrating the whole story.' [Laughs] But ultimately, I don’t want to see it. I want it to be that little piece of the ’90s that’s forever in its proper place. And it was a complete story: I know how everyone ended up because of the five-year push in the finale."

High fives to that sentiment, sir. Because despite the infinite sadness that comes with realizing that there will likely never be another new episode of Dawson's Creek ever again, there's a comfort to be found in simply enjoying the show for exactly what it was. And trying to revive that in some way feels impossible.

There are few shows so wonderfully pure of their time that it's troubling to imagine them in the modern day, but Dawson's Creek is definitely one. And for now, I'm just happy to relive every moment through all of the wonderfully nostalgic old episodes, just as they are.