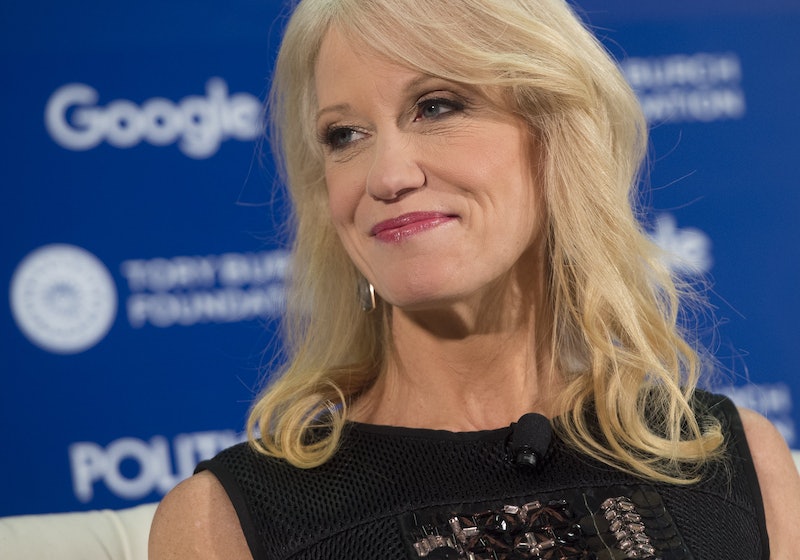 In many ways, President-elect Donald Trump has Kellyanne Conway to thank for his electoral victory over Hillary Clinton. Conway led Trump's campaign — although controversially, at times — for a few pivotal months leading up to the Nov. 8 election, after previously supporting Trump rival Ted Cruz in the primaries. Now that the president-elect is building his Cabinet, Conway's role in Trump's administration seems unclear, but the hesitation could be on her part rather than his.

Conway joined the Trump campaign in July, and she rose to the position of campaign manager shortly thereafter. Trump went through several campaign managers throughout the election, but it was Conway who led his team into the November election. Since Trump's victory, rumors have swirled about Conway's future in the Trump White House, in part because Conway herself has boasted about a job offer from the president-to-be.

Although it remains unclear what Conway's role will be after Trump's inauguration, it does seem likely that she'll remain close to team Trump, even if she doesn't hold a traditional Cabinet position. She not only tweeted about a job offer from Trump, but also told Politico on Wednesday at an event called "Women Rule" that she expects to play a so-called "Kellyanne role" in the incoming administration.

As it turns out, Conway herself may be hesitant to take a job in the White House. Per her comments to Politico on Wednesday, she may opt for a more marginal role because of her four children. "My children are 12, 12, 8 and 7... They have to come first and those are very fraught ages," she said.

But during the Politico event, Conway went on to make a troubling remark about mothers taking on full time jobs. Particularly, she suggested that she accepts the unwarranted pressure society places on mothers, but not fathers, to prioritize parenting over careers.

“And I do politely mention to them the question isn’t would you take the job, the male sitting across from me who’s going to take a big job in the White House. The question is would you want your wife to," she suggested. "Would you want the mother of children to? You really see their entire visage change. It’s like, ‘Oh, no, they wouldn’t want their wife to take that job.’ But it’s, it’s all good."

But it's not "all good." Certainly if Conway wishes to spend more time with her children instead of take a position with Trump's administration, that's perfectly fine and understandable. But if she wants to take on a full-time career in the White House and be a mother, that shouldn't be a problem either. And no one should be complacent with that unfair stigma working mothers know all too well.

Based on her response though, the "Kellyanne role," then, may be an advisor-like position — one that wouldn't require Conway to sacrifice as much time with her family. In her hypothesis on Wednesday, Conway seemed to speculate that she'd serve as a spokesperson for Trump in some capacity.

It's unclear if Trump would welcome this sort of flexibility, but Conway seemed confident that he would support her. "Mothers and married women and unmarried women — they're all welcome in the Trump White House and he's made that very clear to me," she said. If Conway has the opportunity to work in Trump's administration, she could change the way that advisors work inside the White House.