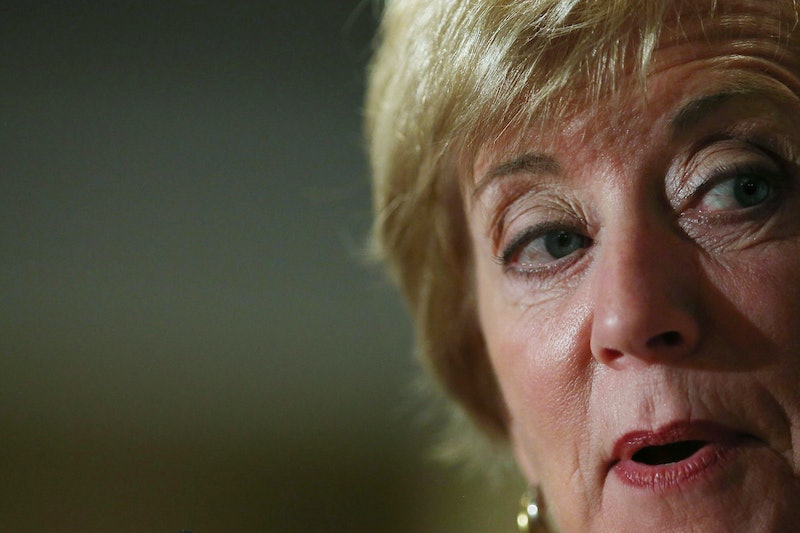 On Wednesday, President-elect Donald Trump announced his latest Cabinet appointment, choosing Linda McMahon to lead the U.S. Small Business Administration (SBA). McMahon previously served as the CEO of Worldwide Wrestling Entertainment (better known as WWE), and, along with her husband Vincent, she is reportedly a long-time friend of Trump's. Although she may soon lead small business policy, McMahon's net worth is anything but small.

McMahon and her husband appear to wield undeniable financial power. For instance, Forbes estimates Vincent's net worth to be a staggering $1.16 billion. Meanwhile, ABC News Australia reports that Linda's personal net worth has been valued at some $500 million. Linda and Vince reportedly founded WWE together, and nowadays, the value of Linda's personal stock in the company is estimated to be about $84 million. In other words, the McMahons have a lot of money.

What's more, they also have a history of spending money on politics. The McMahons reportedly spent $100 million on unsuccessful senatorial campaigns for Linda. She also donated some $6 million to Trump's campaign shortly before the November election. That probably shouldn't be surprising, considering the McMahons have known Trump for around 30 years. They've worked with him on a variety of projects, including WWE events.

McMahon's larger-than-life success with WWE could seem to make her an unexpected choice for Trump's SBA leader. After all, the SBA is tasked with supporting the country's business owners and entrepreneurs, and the median salary for such folks is less than $60,000 per year, according to PayScale. The discrepancy in that middle-class median and McMahon's deep pockets begs the question: Can McMahon adequately serve the country's small businesses?

Ultimately, only time will tell if McMahon is the right woman for the job, but Trump seems to have the utmost confidence in her. "Linda has a tremendous background and is widely recognized as one of the country's top female executives advising businesses around the globe," Trump said in a statement on Wednesday. Considering the success of McMahon's business, perhaps he has a point.

To make his point, Trump pointed to WWE's growth under McMahon's watch. According to the president-elect's statement, McMahon helped to grow WWE from a 13-person operation — in other words, a truly "small" business — to a publicly traded company with more than 800 employees. Clearly, there's no denying McMahon's own success in the business world. Now, the trick will be to see if she can translate that success into growth opportunities for the small business masses.