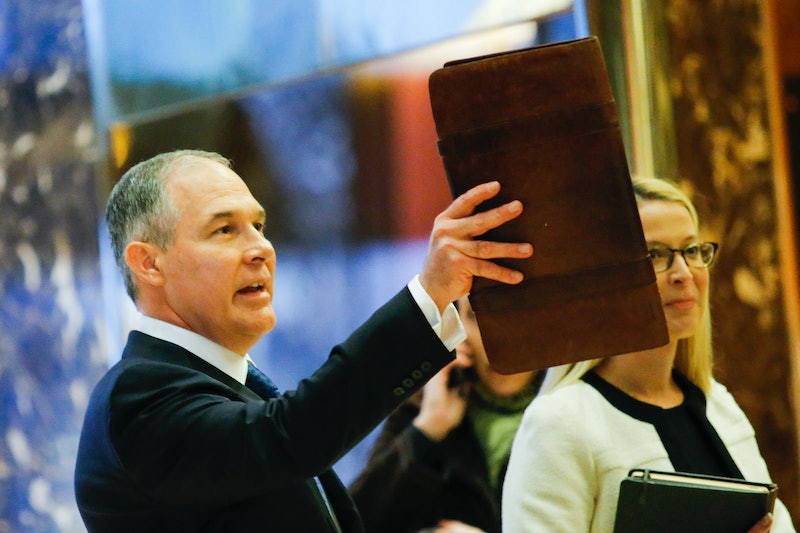 President-elect Donald Trump's pick to head the Environmental Protection Agency was rumored to be climate change skeptic Myron Ebell. But Trump didn't end up choosing Ebell; instead, he chose a different climate change denier to head the EPA: Scott Pruitt. Pruitt, who has ties to the fossil fuel industry, is currently Oklahoma's attorney general.

Trump has not been a very friendly candidate for environmentalists; he famously tweeted in 2012 that "the concept of global warming was created by and for the Chinese in order to make U.S. manufacturing non-competitive." (He later denied he had said this during a debate with opponent Hillary Clinton.) But on Dec. 5, Trump met with former Vice President Al Gore, who is well-known for his work in climate change activism. And, according to The New York Times, Trump acknowledged that he does "'think there is some connectivity' between human activity and a warming planet." But before you get all cozy with the idea that Trump is changing his environmental views, remember that he appointed Pruitt, a known climate change naysayer, to head the EPA. After all, it's worrying for the environmental side of things when coal industry insiders say things like "Pruitt will be a significant voice of reason when it comes to energy and environmental regulations," as Lauren Sheehan, a spokeswoman for the American Coalition for Clean Coal Electricity, told The New York Times.

On that note, here are some quotes from Pruitt about climate change and the EPA:

1. Pruitt is a self-described "leading advocate against the EPA's activist agenda."

The future head of the EPA has specifically taken the time to write about how he advocates against the agenda of that very agency on his LinkedIn page. It's clearly not a good sign for anyone who likes moves the agency has made to protect the environment under the Obama Administration.

2. The White House has an "anti-fossil fuel mentality."

Pruitt told this to the Financial Times like an anti-fossil fuel mentality is a bad thing. Considering the negative impacts fossil fuels have on the environment, including the greenhouse effect, air pollution, and acid rain, it would make sense that the EPA would look to move towards cleaner, renewable sources of energy. As an ally of the fossil fuel industry, Pruitt would be a threat to that movement.

3. "As a Republican attorney general from a southern state, my views on energy policy might be discounted as a simple ploy to bolster the energy industry at the expense of environmental stewardship and responsibility. That perspective would be misguided."

Pruitt wrote this in an article entitled "The Methane Myth: Incompetence and overreach at the EPA." It's hard to say just how misguided that perspective is, considering Pruitt literally sent out letters written by energy company lobbyists and lawyers from Devon Energy with the aim of working against the Obama administration's environmental protection regulations, The New York Times reported. Did I mention Pruitt signed and sent these letters out on his own letterhead after making extremely minor changes?

4. "We all understand the need for a healthy environment, but we represent a wide range of viewpoints regarding the extent to which man contributes to climate change and the costs and benefits of any proposed fix."

In June of this year, Pruitt and 12 other attorney generals signed a letter in which they demanded their counterparts "stop policing viewpoints." This may seem like a valid point, until you realize Pruitt is criticizing law enforcement actions against fossil fuel companies under the guise of protecting free speech.

5. "Scientists continue to disagree about the degree and extent of global warming and its connection to the actions of mankind. That debate should be encouraged — in classrooms, public forums, and the halls of Congress. It should not be silenced with threats of prosecution. Dissent is not a crime."

Pruitt co-authored the National Review piece this line comes from. It's one thing to debate and disagree over something that isn't so clearly defined in terms of science, like which person is most qualified to lead a governmental agency. It's another to dismiss clear scientific findings about the very real existence of climate change and claim that climate change deniers are being threatened. Opinions are for debating; facts aren't.