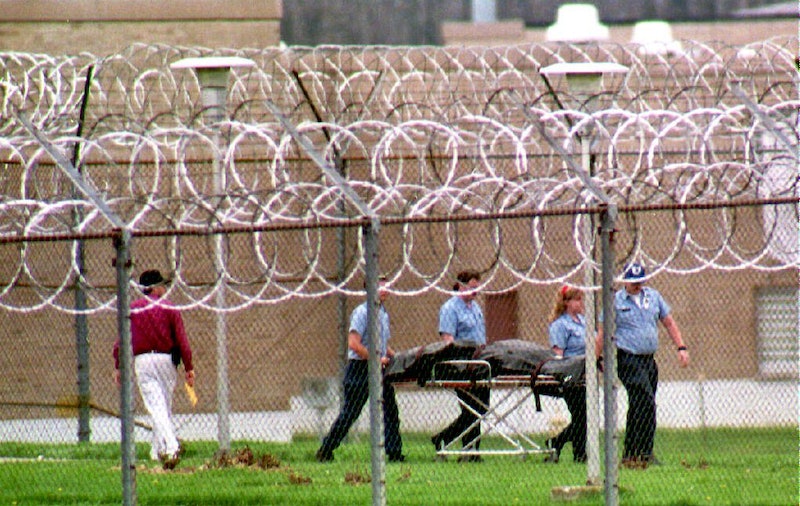 On Easter Sunday of 1993, an entire wing of a maximum security prison was taken over by 450 inmates. As depicted in Netflix's new docuseries Captive , several prisoners rioted and held prison guards hostage for 11 days. Over the course of the takeover, nine inmates and one corrections officer were killed. Although the takeover was national news, Captive delves deeper into the case by providing the perspectives of multiple insiders — including the prisoners who participated in the riots, the guards held hostage, and the authorities who worked towards a peaceful resolution. Over two decades after the takeover, is Lucasville from Captive still an operating prison?

The Southern Ohio Correctional Facility, where the riots took place, remains operational. In January 1997, The Cincinatti Enquirer reported that the state of Ohio would pay a $4.1 million settlement to the inmates who were victimized during the riots. The money went to prisoners who were injured, those whose property was destroyed by guards, and the families of the nine inmates who were killed. In addition to monetary reparations, the settlement required that Lucasville make significant improvements in order to ensure that a similar takeover would never occur again. The outlet reported that these changes would include a one inmate per cell rule for maximum-security prisoners, a fair procedure for addressing allegations of inmate rule violations, and efforts to improve racial and cultural tensions.

Despite these efforts, a March 2016 article from The Columbus Dispatch reports that Lucasville remains "the most violent" prison in the state of Ohio. According to the outlet, the prison is reportedly plagued by gang activity, high rates of drug use, and inmate complaints. Although physical and mental health care in the facility have improved, the violence remains pervasive. The rates of both inmate-on-inmate and inmate-on-staff assaults are the highest in the state — and they appear to be on the rise. In 2015, there were a total of 409 violent incidents at Lucasville, compared to 395 assaults in 2014.

So, although the prison is still operational, it remains plagued by gang activity, racial tensions, and unusually high levels of violence — even two decades after the 1993 riot.

More like this
Michael & Kathleen Peterson’s House From ‘The Staircase’ Has New Owners
By Kadin Burnett and Kayla Blanton
Where Is Dr. Cline Now?
By Morgan Leigh Davies
'Who Killed Sara?' Won’t Return For Season 4
By Brad Witter
Cardi B Explains To David Letterman Why She Uses Her Star Power For Politics
By Jake Viswanath
Get Even More From Bustle — Sign Up For The Newsletter