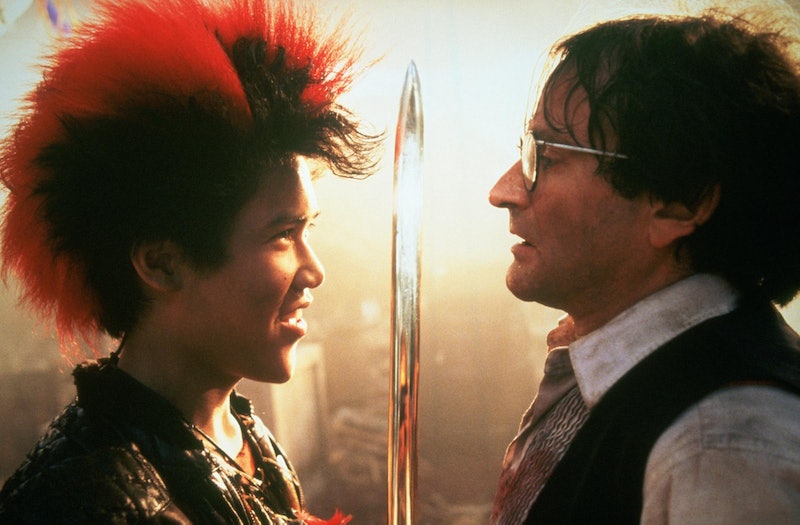 As a child I watched Hook so many times that I still occasionally find myself chanting "Rufio..." at someone who's a big deal. I even occasionally have to check in with myself to make sure that my belief in fairies is still in tact (it is), because Tinkerbell left such a huge impression on me. It's been 25 years since Hook was released (it's OK, guys. I gasped in horror at that too) and the film still feels just as magical as it always has. However, I absolutely thought I knew everything there is to know about the movie, but apparently not. Recently I discovered two huge celebrity cameos in Hook, which I was never aware of — George Lucas and Carrie Fisher play a kissing couple in the movies intro. No, really.

At the start of Hook, we see Tinkerbell spreading her fairy dust throughout London when it sprinkles upon a kissing couple on the bridge. As they continue to get their smooch on, their feet leave the floor and they begin to float with each other, and it's these two mysterious lovers who are apparently played by the two cinematic icons. You'll be forgiven for not noticing this detail however, as the scene in question hardly makes their identity clear in the least bit. Their apparent cameo is brief, set a distance and the two actors also weren't credited for the roles.

Though there doesn't appear to be any confirmation of this cameo from Lucas, Fisher or even director Steven Spielberg, there are a couple of interesting facts which may support their appearance. The first is that, according to the IMDB trivia page for Hook, Fisher was Spielberg's original prototype for Tinkerbell, and she also apparently provided some unedited rewriting on the final draft of the movie's screenplay.

The other fact that lends credence to their cameo appearance, is the fact that Lucas and Spielberg are good friends. In fact, their friendship even happens to predate the colossal success of either of their filmmaking careers, having met in 1967 when an 18-year-old Spielberg saw Lucas' first film THX 1138 at a student film festival at UCLA.

With Lucas and Fisher sharing the Star Wars connection (him, of course, as the creator of the film franchise and her as the iconic Princess Leia), Lucas and Spielberg sharing their lifelong bond, and Fisher apparently contributing to some of the creative input of Hook, it's no surprise that the cameo may well have happened. It may be something of a small, throwaway moment at the start of the film, but it's also an incredibly sweet and fun one.

You've also really got to applaud Spielberg's decision to include such a huge cameo in a way that audiences would never be able to recognize the two stars. It gives the impression that their brief inclusion in the film may have been tantamount to little more than a bit of on-set fun — a joke between old friends. And like the fairy dust that Tinkerbell scatters over Lucas and Fisher, there's something truly magical about that.

More like this
The 'Hocus Pocus' Sequel Finally Has A Release Date & It Makes Total Sense
By Shannon Barbour and Radhika Menon
Hayden Panettiere Will Return For 'Scream 6': "We F*cking Won, Scream Fam"
By Jack Irvin and Jake Viswanath
David Schwimmer Doesn't Remember This Classic 'Friends' Episode
By Sam Ramsden
Kim Cattrall Spilled All The Tea About Not Being In The 'Sex And The City' Reboot
By Radhika Menon
Get Even More From Bustle — Sign Up For The Newsletter