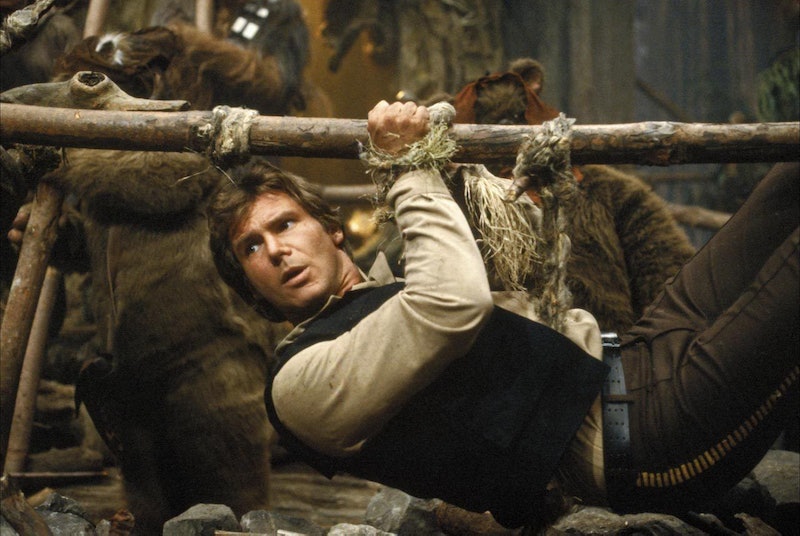 Rogue One is introducing a whole new cast of heroes to the Star Wars franchise as the first anthology film in the series, but that doesn't mean we won't see some familiar faces in the new film. Rogue One takes place sometime between the prequel trilogy and the original — after Episode III, but before Episode IV. Most characters from all six films could be fair game, which naturally has fans desperate to see at least one of the original heroes. But is Han Solo in Rogue One ?

Spoilers ahead! Sadly, the beloved character does not appear in the film, despite the fact htat it would definitely have made sense for Han Solo to pop up somewhere in Rogue One . After all, he was a young smuggler when he made his debut in Episode IV, a dubious career that could have taken him anywhere in the galaxy. And, though he was not an active member of the Rebellion at first, that doesn't mean he didn't cross paths with a few Rebel fighters before he met Luke and Leia. Narratively, at least, a Han Solo cameo wouldn't have been completely ridiculous.

That said, at the Star Wars Celebration in Europe over the summer, Rogue One director Gareth Edwards denied Han Solo would be anywhere near the film. "I can put to bed, Han Solo is not in the movie," Edwards told Extra. Lucasfilm's Kathleen Kennedy also denied a Han Solo cameo at the same event.

Now, just because Edwards and Kennedy said it wasn't going to happen didn't necessarily mean that all hope of Han Solo appearing in Rogue One was gone, as sometimes, studios and filmmakers lie to keep a spoiler under wraps and ensure a surprise for the audience. But unfortunately, they were telling the truth in this case. Still, plenty of other characters from previous films are return in Rogue One. Darth Vader plays a role, as do Senator Bail Organa and Senator Mon Mothma from the prequels, and even — major spoiler alert — Princess Leia.

And really, if a Princess Leia cameo could happen, why couldn't a Han Solo cameo? Just because the character is (spoilers for The Force Awakens) supposedly no longer being played by Harrison Ford, that doesn't mean that a new actor couldn't have come in to play a younger version of Han Solo in the film.

In fact, it would've been good business for Han Solo to make a cameo appearance in Rogue One to act as a primer for the upcoming Han Solo spinoff. Like Luke and Leia, Han Solo is a character practically synonymous with the actor who played him in the original trilogy. But, in the spinoff, a new actor, Alden Ehrenreich, is taking over the role as a younger version of the character. Audiences will undoubtedly have some problems adjusting to Han Solo's new face in the spinoff, and what better way would there have been to ease them into it than with a cameo from Ehrenreich's Han Solo in Rogue One?

Still, don't lose hope, nerf-herders! Han Solo might be on the big screen again sooner than you think.