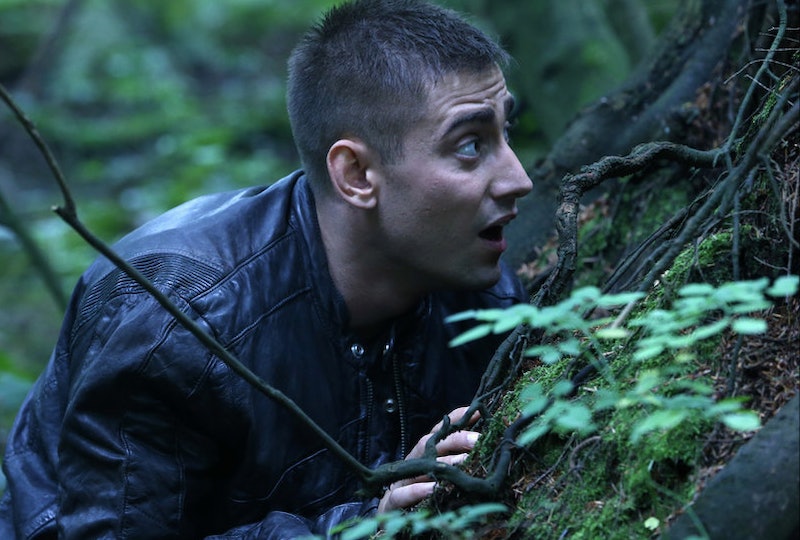 When the news broke that Michael Socha had been cast in Once Upon a Time after Once Upon a Time in Wonderland was officially cancelled, my first thought was but what about Anastasia? With only one episode separating the audience from the end of the series, the love story of the Knave of Hearts and the Red Queen has been left in a pretty precarious position. None of the other stars of OUAT in Wonderland have been confirmed to be joining OUAT anytime soon, which makes it fair to speculate that the Knave is going to have a life half as tragic as Regina's if he's going to be entering Once Upon a Time without his best friend or his true love. Luckily, it's a safe bet that he'll just be rejoining the Merry Men and Robin Hood since the Knave is also Will Scarlett, a longtime member of the Robin Hood legend. But his true love? That's a lot harder to replace.

The OUAT universe is one in which true love thrives above all obstacles, however. And it doesn't narrowly define true love as romantic love. Hero and savior Emma Swan has one true love at the moment and that's her son Henry; their love was powerful enough to break a twenty-eight year long curse. Her enemy-turned-ally Regina is getting her own second chance at true love in the form of Robin Hood, proving that your true love doesn't even necessarily have to be your only love or even your first. If OUAT in Wonderland buries the Knave and the Red Queen's relationship once and for all, there's no way Socha will make it through an entire season on OUAT without finding another. The only question is who.

The prime candidate for a romance with the Knave is Red Riding Hood. In fact, the only real limitation on that is the fact that Meghan Ory is currently starring in Intelligence . Her cameo this season left fans with high hopes that she might return if given a compelling enough storyline and what would be more compelling than teaching the Knave of Hearts that he can love again? Ruby has suffered through her own loss of love, when she discovered that she was a werewolf by eating her first love, Peter, so if anyone can understand what he's going through right now, it's her.

Rapunzel is a new addition to the OUAT fairytale land, introduced in a flashback of the time Prince Charming helped rescue her from her tower. The episode was entirely about Charming and his problems and it was kind of a lackluster adaptation of the fairytale, so it would be great to see more of Rapunzel as a character with a fleshed out personality. She lost her elder brother, which thrust her toward the throne before she was ready, and she hasn't been seen yet in Storybrooke, but we'd love to see how that all turned out for her.

Tinkerbell is basically the biggest Captain Hook and Emma Swan fan in any of the worlds as well as occupying the strange position of being the Evil Queen's only real friend. She hasn't been seen yet in the second half of the season, but she has helped Hook deal with his feelings for Emma and Regina deal with her feelings for Robin Hood, all while blowing fairy law back in her boss's face if and when it means she gets to help someone. She would be like the Cher Horowitz of Storybrooke, always helping others and not seeing who's right in front of her face.

The last time we saw Mulan, we were sobbing into her hands as she left Aurora and Prince Philip behind in unborn baby bliss after a failed attempt to confess to Aurora that she's in love with her. Mulan joined Robin Hood and his Merry Men, which means she must be in Storybrooke somewhere, and, since Aurora is her second love after Prince Philip himself, the Knave won't run into the same level of incompatible orientation that Mulan did if he decided to confess his feelings.

Of course, any of that is assuming that he's able to get over Anastasia at all. For every two love interests that die (aka every man Emma Swan has ever loved), another one is brought back (aka Frederick, the true love of Prince Charming's ex-fiancee Abigail, and, recently, Rumplestiltskin). His grief might push him to some dark avenues to try and bring the Red Queen back and there's still time for Emma Rigby to be confirmed as moving up to OUAT as well.