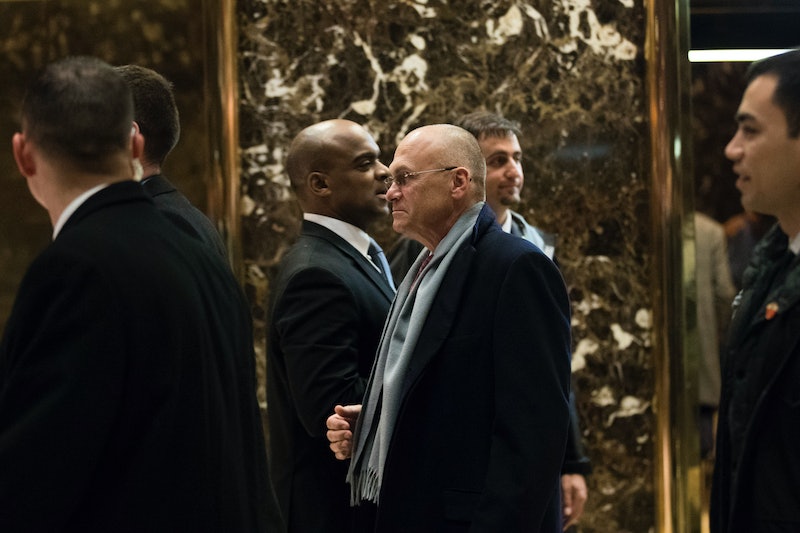 Donald Trump is expected to nominate Andrew Puzder as U.S. Secretary of Labor, according to Wall Street Journal, thus adding yet another billionaire with little to no political experience to his Cabinet. Puzder currently serves as CEO of CKE Restaurant Holdings, the parent restaurant company that includes Carl's Jr. and other fast food brands. Having made his money in an industry built on the backs of minimum wage earners, its perhaps no surprise that Puzder is against efforts to increase the minimum wage. In Oct. 2014, he wrote an op-ed in the Wall Street Journal opposing President Barack Obama's call to raise the federal minimum wage, arguing that the increased costs to business owners would encourage them to cut jobs.

As Secretary of Labor, Puzder would be responsible for suggesting laws having to do with all kinds of labor issues, including federal minimum wage. And considering he was against raising it to $10.10, any hope for even a small increase could be shot for the next few years if he is confirmed by the Senate. Nationwide, state-level movements to increase minimum wages as high as $15 will become even more critical.

Besides minimum wage, Puzder has also advocated against the Affordable Care Act and expanding eligibility for overtime pay. In a May op-ed for Forbes, he argued that Obama's overtime pay regulations would encourage employers to get around them by cutting benefits and reducing the number of salaried employees. His views in the article echoed those from a 2014 piece he wrote for the Wall Street Journal.

Puzder's steadfast stances will serve to bolster Donald Trump, who has been wishy-washy on such issues. As the Washington Post's Michelle Ye Hee Lee reported earlier this year, Trump's position on minimum wage have been consistently inconsistent. He has come out pro and against raising the federal minimum wage numerous times this year, once even proposing doing away with it completely. He seems to have finally solidified his stance with this latest nomination of Puzder. Consequences for the American worker could be dire if they propose lowering or abolishing the federal minimum wage all together.

Overall, it's been a disheartening couple days for anyone in favor of raising the country's minimum wage. Just yesterday Trump's transition team announced his pick of Linda McMahon to head the Small Business Administration. In 2010, while running for U.S. Senate in Connecticut, the former WWE CEO made headlines for not knowing what the state's minimum wage even was and then flip-flopping on whether she was for or against lowering it.

Trump has promised to make America better for business owners and workers alike. But with Puzder in his Cabinet, both could end up feeling screwed.