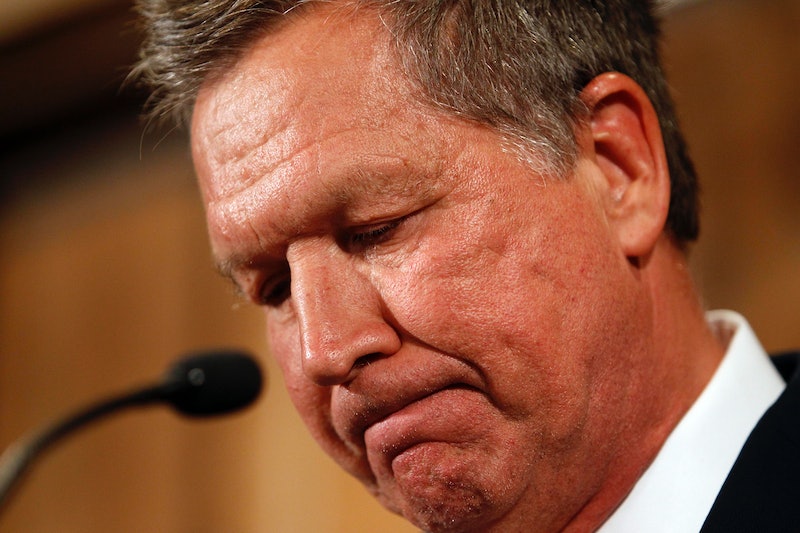 Immediately after president-elect Donald Trump won the 2016 election, women across the country became concerned about their future access to reproductive health resources, including birth control. And it turns out that the fear surrounding reproductive rights in a Trump administration wasn't unfounded. On Tuesday, lawmakers in the Ohio House and Senate passed legislation that would become the most restrictive abortion bill in the country. But how likely is Ohio's "Heartbeat Bill" to pass?

Ohio Gov. John Kasich has 10 days after the bill was passed in the state's House of Representatives to sign it into law. The "Heartbeat Bill" would outlaw abortions after a fetal heartbeat is detected (typically about six weeks into a pregnancy). Kasich has previously suggested that such a bill might be considered unconstitutional. Arkansas and North Dakota have passed similar laws, only to be ruled unconstitutional by the U.S. 8th Circuit Court of Appeals. The Supreme Court refused to hear appeals to the ruling.

The Columbus Dispatch reported that there is a possibility Kasich could line-item veto the abortion language in the bill because it also includes a $100,000 appropriation for a Joint Legislative Committee on Adoption Promotion.

However, even if he does veto the "Heartbeat Bill," Kasich may also have to make a decision about a 20-week abortion ban. On Wednesday, members of the Ohio House voted to recommend approval for a bill passed by the Senate banning abortions after 20 weeks, according to The Columbus Dispatch. Although a 20-week ban has gone through in a handful of other states, many consider it unconstitutional since Roe v. Wade ruled that women have the right to abortion until "fetal viability," which typically doesn't occur until about 24 weeks.

The Columbus Dispatch reported that Kasich has yet to comment directly on the current legislation, so we really don't know what will happen just yet. But considering the possibility of Trump appointing more conservative justices, it's not hard to imagine more abortion billing popping up and some even making their way into law. While on the campaign trail, future Vice President Mike Pence previously announced that Roe v. Wade would be overturned if Trump won. Whether that will be a reality in the next four years is up for debate, but it's certainly not a good sign to have a future VP voicing his anti-abortion views.

Overall, reproductive rights are not looking great in Ohio right now. One of the strongest ways to fight back to this destructive legislation is to make your voice heard. If you're feeling helpless, here are six petitions fighting the Heartbeat Bill you can add your name to.