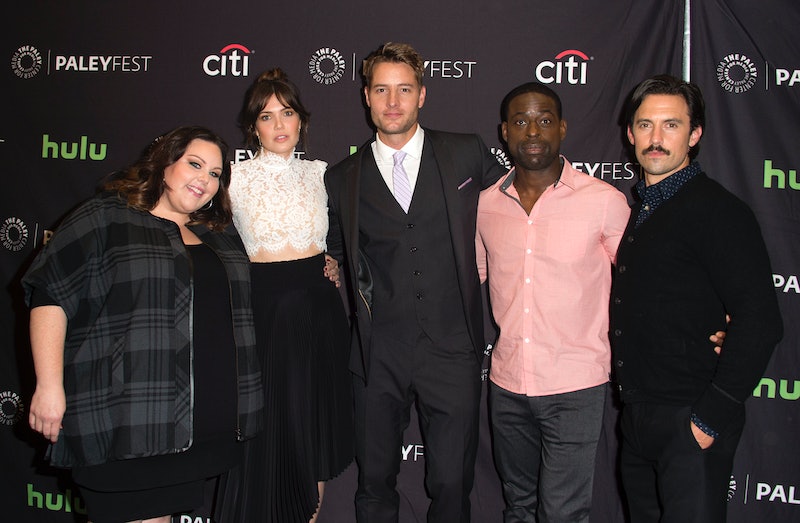 As far as television goes, fall 2016 was exceptional. With fresh plot lines, fully developed characters, top-notch acting, diverse casts, and nail-biting cliffhangers, awards season will sure be a doozy. Yet no show has been able to take me on an emotionally draining roller coaster quite like NBC's comedy-drama series This Is Us. Naturally, one very obvious question remains — and no, I don't mean what will be the fate of Kate's on-again, off-again boyfriend, Toby. I'm curious to know if This Is Us is eligible for the 2017 Golden Globes?

From the moment Jack and Rebecca Pearson brought home "The Big Three," I had to know how the sweet, young couple would not only handle raising twins but also an adopted black son. While flashbacks show the kids enduring the usual ups and downs like sibling rivalry, trying to fit in at school, and seeking attention from their parents, the present-day Pearsons each grapple with their own deeply personal obstacles. From Kate's struggles with weight loss and Kevin's career troubles to Randall's new found relationship with his terminally ill biological father, all the stories are woven seamlessly together. This Is Us has all the fixings of an award-winning show, but before nominations are announced on Dec. 12, let's take a look at how probable or impossible Golden Globe glory will be for the Pearsons.

According to the official award rules for the Golden Globes, the "deadline for submission of Golden Globe Motion Picture and Television" was Monday, Oct. 31, 2016. Thankfully, there's no need to fear for This Is Us. The highly acclaimed series debuted on Sept. 20 and was picked up for a full second season just seven days later.

Joyce Eng of TV Guide says first-year shows tend to do well at the Globes. "If you're a newcomer or a new show, your chances of being nominated and winning a Globe will be the highest they'll ever be and just like life, it's all downhill from there," she writes. This Is Us is brand, spanking new and tows the line of being a comedy and a drama so the ensemble cast has twice the shot of scoring a nomination.

The Drama Of Being A Drama

Yet, the shows ability to tug mercilessly at our poor, little heartstrings may be its undoing. Eng writes, "No network show has won the drama series Globe since Grey's Anatomy 10 years ago." OK, maybe that sounds like quite an uphill battle, but come on — the scene where Jack does pushups with Little Randall on his back was an instant classic. Someone at the Hollywood Foreign Press Association has to agree.

Bow Down To Brown

Tony Ruiz from the award-prediction website Gold Derby says Sterling K. Brown, who plays Randall, has the juice to take home the Best TV Supporting Actor award for his role as Christopher Darden in FX's The People v. O.J. Simpson. However, given that the category combines roles from comedies, dramas, TV movies, and limited series, Ruiz says, "it would not be out of the ordinary for Brown to receive an additional nomination for This is Us.

Do you think "The Big Three" will shine at the Golden Globes? Tune in Sunday, Jan. 8 at 8 p.m. ET on NBC to find out.

More like this
Will Shoresy Get A Season 2? What To Know
By Kadin Burnett
What Does Michael Peterson’s Family Think Of 'The Staircase'?
By Arya Roshanian
The 'Grey’s Anatomy' Season 18 Finale Might Have Had A Sneaky April Easter Egg
By Grace Wehniainen
Jennifer Aniston Joked About Ending 'Friends' With Therapy & Divorce
By Grace Wehniainen
Get Even More From Bustle — Sign Up For The Newsletter