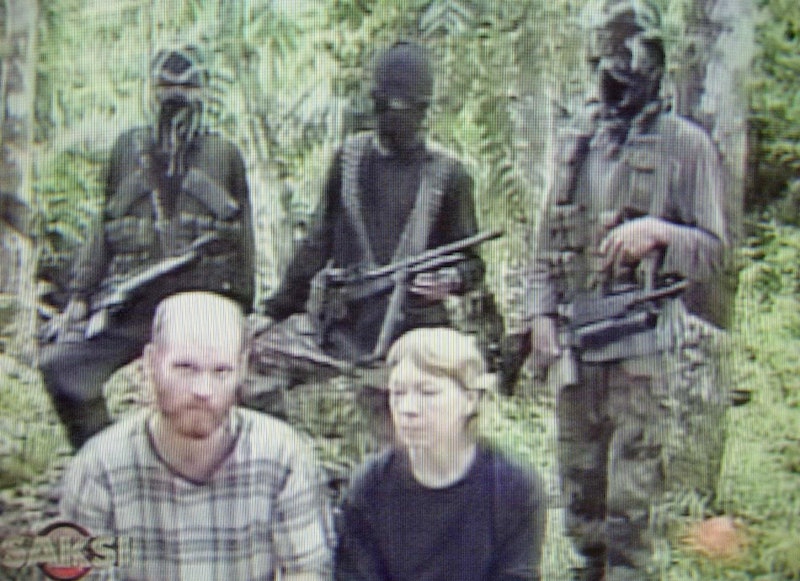 Netflix’s newest docuseries Captive focuses on the business of for-profit kidnapping and hostage situations. Every episode focuses on a different region, a different group, a different hostage situation, and for someone who is fascinated by true crime like myself, it is so, so interesting (and mildly terrifying). One of the stories that caught my eye was the kidnapping of American missionaries Martin and Gracia Burnham by the Abu Sayyaf Group in the Philippines in 2001. Is the Abu Sayyaf Group still operating?

According to the National Counterterrorism Center (NCTC), the Abu Sayyaf Group (ASG) is “the most violent of the Islamic separatist groups operating in the southern Philippines and claims to promote an independent Islamic state in western Mindanao and the Sulu Archipelago.” The ASG — whose name means “bearer of the sword” — split from another group, the Moro National Liberation Front, in the early 1990s, and their usual MOs are kidnappings, assassinations, bombings, and extortion. The ASG uses terrorism to promote a jihadist agenda. According to the BBC, ASG operates out of the southern part of the Philippines because of the demographics of the region — most of the country is Roman Catholic, but the south is predominantly Muslim.

The ASG kidnapped the Burnhams and 18 other people from Palawan, Philippines in May 2001 (the Burnhams were vacationing there for their wedding anniversary, according to her website). The site reports that some of the hostages were killed, but most were set free, until it was just the Burnhams and one other hostage remained with Abu Sayyaf. In June 2002, Martin and the other hostage were killed in a firefight between ASG and the Philippine military, and Gracia was evacuated.

ASG didn’t stop after this situation, though — the NCTC reports that members of the ASG bombed a ferry in Manila Bay in 2004, killing 116 people, and killed eight and injured 150 in simultaneous bombings throughout the city of Manila in 2005. Unfortunately, the terrorism hasn’t stopped in recent years — Bernard Then, a Malaysian hostage captured by ASG, was beheaded in 2015 after ransom negotiations broke down. According to Al Jazeera, 12 Philippine soldiers were killed in clashes with the ASG in August 2016, and as of that time, “eight Indonesians, eight Filipinos, five Malaysians, a Dutch, and a Norwegian national are still being held by the group.”

Captive explores the harrowing tale of the Burnhams and their capture by the Abu Sayyaf Group, and unfortunately, this group is still in full force, despite the best efforts of the Philippine army. I think that one of the biggest takeaways is that extremist groups have existed long before ISIS came onto the world’s stage, and not just in the Middle East.