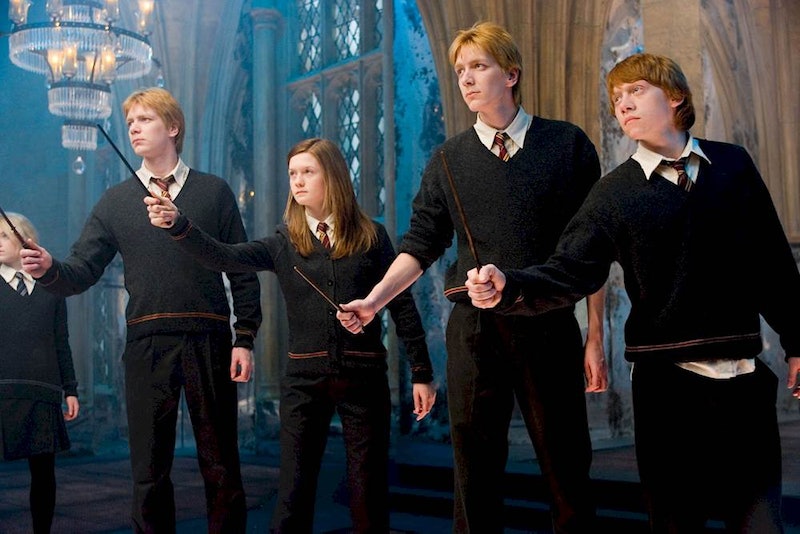 If you've wondered whether J.K. Rowling has ever made a mistake ever in her life, I have news: the first Goblet of Fire draft included another Weasley, and she would have seriously altered Hermione's trajectory.

Regardless of whether you consider this good news or bad news, it's definitively not recent news. In a 2000 interview with Entertainment Weekly, Rowling noted that a flaw in the fourth book, Harry Potter and the Goblet of Fire, was extensive enough to warrant serious re-writes and a significant amount of stress on Rowling's part.

Though she didn't elaborate any further on what this plot hole, which caused her to miss her deadline by two months, was, the answer can be found on Rowling's website. Or at least, it could - 2012's redesign deleted many of her discussions regarding deleted and rewritten characters. Thankfully, Redditor u/Galious is on it; they posted a direct quote from the website earlier today in response to u/lugua's discussion question regarding What! To heck! That mysterious plot change was!

The flaw, apparently, was a "phantom Weasley": Mafalda. Mafalda was set to be a cousin of the Weasley brood. A deeply unpleasant, complicated cousin. The daughter of "the second cousin who's a stockbroker," a squib, and his wife, a muggle, Mafalda is shipped to the Weasley household the summer before her first year at Hogwarts in an attempt to introduce her to wizarding society.

Or there's also the possibility that her parents just got tired of her because apparently she sucked.

Despite her unlikeability (and her potential, uh, evil-ness - she's sorted into Slytherin), Mafalda possesses an academic prowess that rivals Hermione's.

She's also, arguably, a muggle-born Slytherin, which would have produced a fascinating deep-dive into the legitimacy of squibs ("wizards" born without the ability to practice magic).

But Mafalda's real job, at least initially, was to be the supplier of Death Eater information to Harry, Ron and Hermione. Because secretly, she wanted to impress them. Because she is a really interesting, multi-layered character.

Ultimately, though, Rowling found the limitations placed on an eleven-year-old sequestered within Hogwarts to be too taxing on the plot. Rita Skeeter was instead built up into the role of information succubus.

But fam, just for a minute, can you imagine how Hermione's character would have evolved had she been faced with an actual, intellectual, female rival? Who is also related to her boo? Who is also a Slytherin, who is also of "questionable" birth in the eyes of her own people? Whose name means "strength in battle"?! Like?!

J.K., I know you're super busy being important, but can we please get a li'l post-script Mafalda subplot?