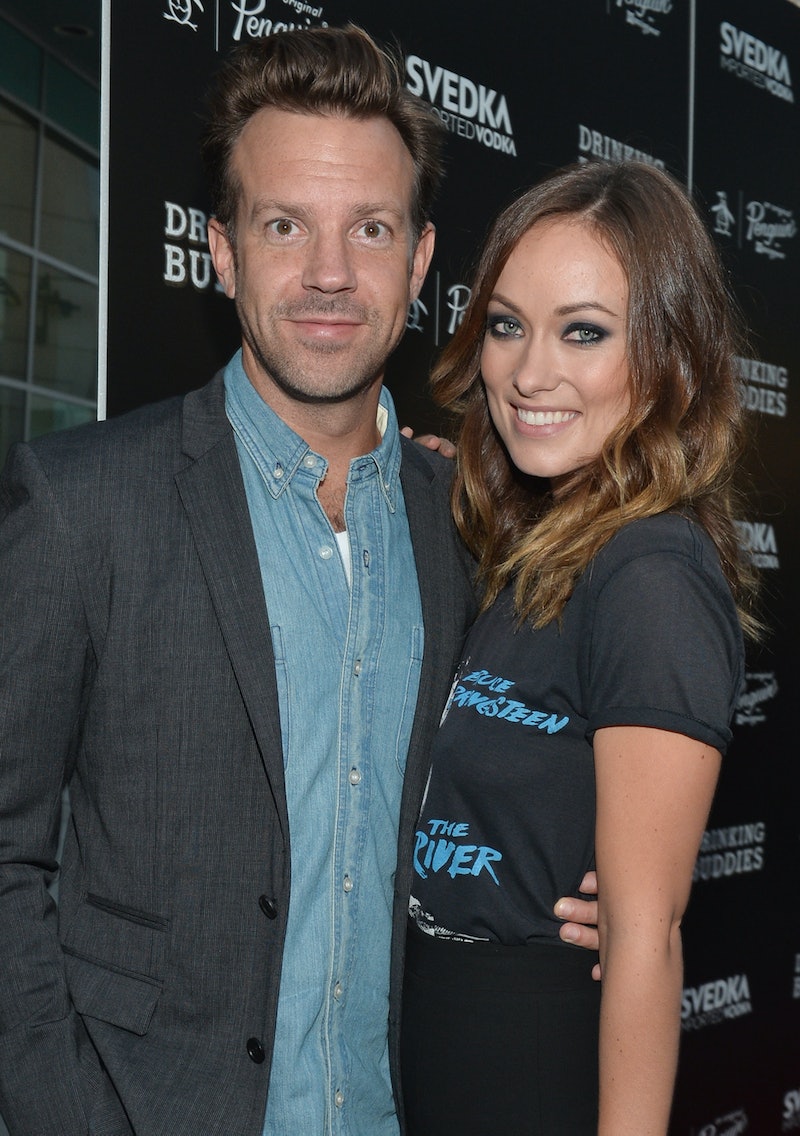 Usually, when a couple announces they're going to have a baby, family members are the only ones who have strong reactions to the news. But that's not the case when it comes to celebrities. When the famous get pregnant, seemingly everyone in the country forms an opinion. Brad and Angelina have Shiloh? Shocked! Kim and Kanye have North West? Exasperated. Olivia Wilde and Jason Sudeikis announce they're going to be parents? THRILLED.

It may seem weird for us to be this excited over the family plans of people we don't actually know, but Wilde and Sudeikis, who confirmed the pregnancy to People on Sunday, have established themselves as the coolest celebrity couple around. (Sorry, Kristen and Dax.) There's no doubt that, as parents, they'll induce the jealousy of all of us who didn't grow up calling a gorgeous actress and a comedy genius Mom and Dad.

So in the spirit of congratulating Olivia and Jason on their exciting news, here are seven reasons we love the super couple:

This one's mostly about Wilde, since Sudeikis doesn't have a Twitter. His fiancé, though, is a social media pro, sending hilarious tweets and posting fascinating Instagrams. Whether it's confirming the pregnancy:

Or acknowledging the world's weirdness:

Wilde proves, over and over again, that she's a master at all things Internet.

Sudeikis, to InStyle : “She is a combination of everything that I love about women — she’s smart, strong, caring, beautiful, and as funny as anybody I’ve ever known. She just has it all. It’s like the most gorgeous Costco you’ve ever seen in your life.”

Both Wilde and Sudeikis frequently show their passion for important causes, from supporting political campaigns to traveling across the world. Wilde has produced a documentary about developing countries, has helped build schools in Haiti, and has visited Africa with Nicholas Kristof as part of his female-empowerment Half the Sky project.

Sudeikis, meanwhile, has attended charity fundraisers, played whiffle ball to finance children's hospitals, and has been active in supporting Artists for Peace, an organization that helps bring health care and education to impoverished communities in Haiti.

They Have Great Taste in Music

Wilde and Sudeikis are huge music fans who seem to be in the audience of every concert you wish you attended. They've supported charity at the Global Citizen Festival, sung along to Edward Sharpe and the Magnetic Zeroes, and rocked out to Kanye West and Kendrick ("Lamar, not Anna," Wilde clarified) — and that's just in the past month.

You only have to watch a handful of Saturday Night Live episodes to know that Sudeikis is a comedy pro. Over his 10 years on the show, he won over audiences with his spot-on impressions of politicians, from Rod Blagojevich to Joe Biden; his beloved recurring characters, from The Devil to Peter Twinkle; and his general genius of creating sketches, from "Jon Bovi" to "Maine Justice." When he left the show earlier this year, the cast, crew, and fans everywhere mourned the loss. Thankfully, August's epic Mumford & Sons video (below), where Sudeikis impersonated the band alongside fellow funnymen Jason Bateman, Will Forte, and Ed Helms, proved that his comedy talents aren't limited to Saturday Night Live.

Wilde may not be known for her comedic talents, but recent roles have proved that she shares her fiancé's aptitude for humor. In this year's Drinking Buddies, Wilde showed off her comedy chops as an employee at a brewery whose easy chemistry and immense charm impressed critics and viewers alike. And on Twitter, Wilde's humor has no bounds, with funny, enormously re-tweeted posts like this:

They Star in Our Favorite Movies and TV Shows

Sudeikis is best known for his years as a cast member on Saturday Night Live, of course, but he's built up quite a resume outside of the NBC show. Among other projects, he's starred in a recurring role on 30 Rock, 2011's hit comedy Horrible Bosses, and this summer's We're the Millers. Wilde, meanwhile, first made waves in an arc on The O.C. before making it big as a lead character on House. Her transition into movie star has been nothing but smooth, with Tron: Legacy, Drinking Buddies, and Rush all receiving acclaim. Next up is a supporting role in Spike Jonze's Her, a hugely anticipated drama that's currently a favorite in the Oscar race.

Few Hollywood couples seem as much in love with each other as Wilde and Sudeikis. From Wilde showing her support for Sudeikis' beloved basketball team, to Sudeikis thanking his uh, active fiancé for being "the greatest workout partner in the world", to the duo having no qualms about PDA, there's no doubt that the couple is insanely in love.