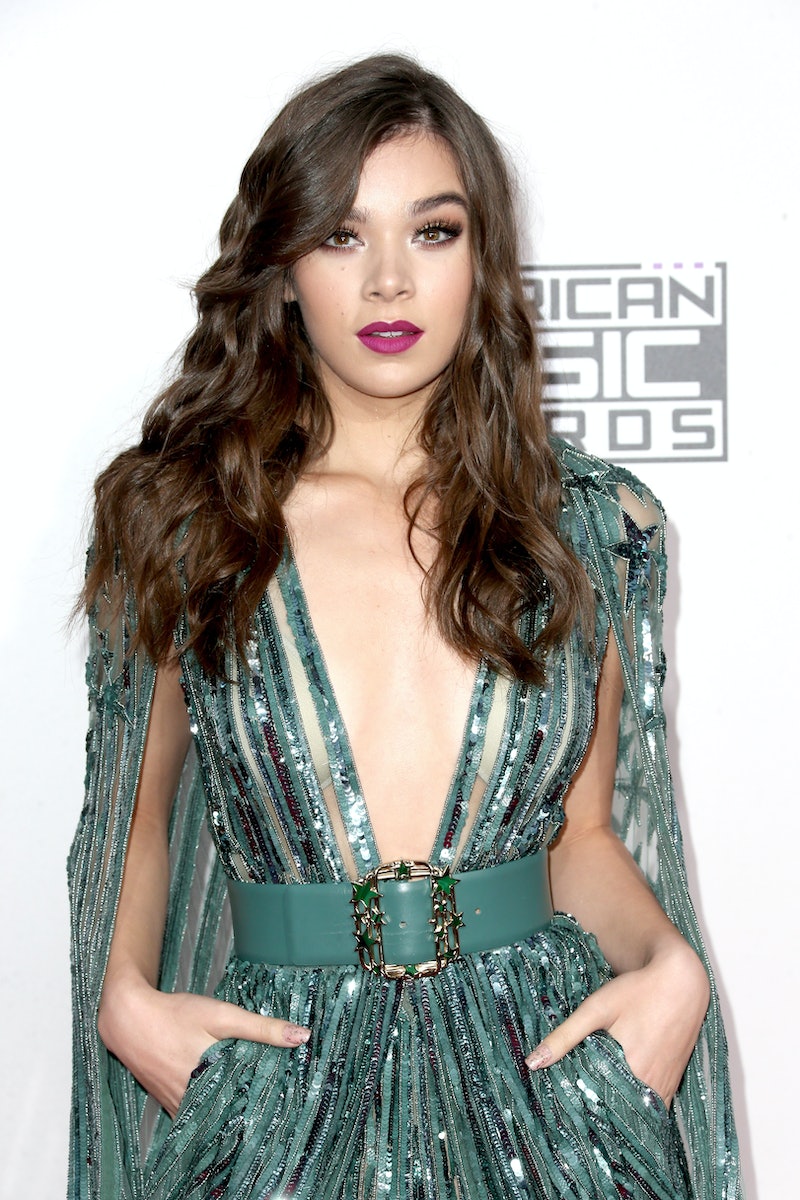 As far as awards shows go, there's a specific one that I always make a concerted effort to watch: The Billboard Women In Music Awards. Providing an empowering platform that not only highlights and celebrates female talent in the music industry, the ceremony also showcases exceptional performances from both rising and established artists. One performance that you'll definitely want to make sure you catch is that of the spectacular Billboard Women In Music host Hailee Steinfeld.

That's not to say that the appearances from other artists performing at the ceremony like Kesha and Andra Day won't also be exceptional, but just that the truly jaw-dropping talents of Steinfeld are ones worth paying particular attention to. And, with the Billboard Women In Music Awards airing Monday, Dec. 12, at 9/8c on Lifetime, this is basically your opportunity to keep that evening free to witness what is undoubtedly going to be Steinfeld owning that stage completely.

There are a number of reasons why she obviously makes for the perfect choice of host for the ceremony, but, as a performer, I feel that Steinfeld could truly deliver a generation-defining show. One that not only pays ample tribute to the icons who have influenced her and the masses of other female musicians throughout history, but that also serves as being greatly inspirational to up and coming ones.

Because, like many established women in music, Steinfeld has a talent that can't simply be sustained just by music. Her presence on stage, and in music videos, encompasses the theatrical side to her personality, a side that sees her continually wowing audiences by starring in films like The Edge Of Seventeen and True Grit (for which she was nominated for an Oscar).

Steinfeld has that quality reminiscent of truly iconic musicians like Lady Gaga, Jennifer Hudson, Cher, and Madonna, who all possess a specific creative spark that lends itself to both acting and music. It's extremely rare to find a performer that can not only do, and be successful, at both, but who is also astoundingly talented in equal measures at both. For our generation, Steinfeld is by far becoming one of the leading prodigies capable of that achievement, and perhaps of more beyond that.

Though it may already seem as though she has been around since forever (in the greatest way possible), she's still only at the beginning of what looks set to be a colossal and long career. People like Steinfeld don't release a couple of albums only to disappear into obscurity. They become entertainment powerhouses and truly emblematic icons who define a generation. Her performances are evidence of that fact.

One of the great things about the Billboard Women In Music Awards is that not only does the show provide glimpses of young artists in that crucial transitional stage between simply establishing themselves and taking over the damn world, but it also does so while celebrating long-established artists and true musical icons. It's emboldening, for instance, to see an artist like Steinfeld, who is truly at the apex of such global takeovers, sharing a stage with an established icon like Madonna, who is being honored as Woman Of The Year.

By doing this, the ceremony not only acknowledges the achievements of a young musician, and the potential influence they may have on a whole new generation of artists, but also that of the established performers who have paved the way for them. To witness women who may just be at the beginning of their careers alongside those still standing strong decades after they break out themselves serves as an inspiring message to women at home who may be musicians or considering taking their first steps into becoming one. It is possible. You are capable. You can do this.

As if to highlight that point perfectly, Alessia Cara (recipient of the Rule Breaker accolade at the awards) made a statement regarding the "reality" of having to prove herself as a young woman, not just in the industry, but in the world, stating: “As a young girl, I’m always going to have to work a bit harder to prove myself; that’s just reality. But having to work harder makes me feel like girls are stronger, too.” And witnessing women do that hard work and enjoy those achievements on stage at a ceremony like this is truly inspiring for creative women to see.

Steinfeld's hard work is undoubtedly inspiring to women, but her music is, too. The song, "Love Myself," for example, was one that she thought had "a really strong self-empowerment message." Her work also reflects that of other contemporary female musicians who deliver pop music that retains a sense of fun while carrying an intelligent and inspiring message. In fact, it seems almost like a glimpse at the future of where pop music is going.

The musician Halsey (recipient of the Rising Star honor at the awards) discussed in an interview with Billboard how the next wave of pop music may develop into a "weird kind of intelligent pop" that could engage people's intellect while still giving them the escape they crave from the world or their own lives. Both Steinfeld and Halsey's music definitely reflects this trend, and it's a trend that feels so necessary right now. All I want to do is dance to music that still allows my brain to flex a little, you guys.

And that's exactly why you don't want to miss Steinfeld's performance at the Billboard Women In Music Awards. Not only is her music intelligent yet upbeat, and her talent multi-faceted and stunning, but this could be one of the final opportunities you have to witness a performance by her before she completely takes over the world.

More like this
Stormi Just Walked A Red Carpet With Mommy Kylie Jenner & Daddy Travis Scott
By Hugh McIntyre
Is Megan Fox Pregnant? MGK Gave A Shout-Out To Their “Unborn Child” Onstage
By Hugh McIntyre
Spice Girls’ Net Worth: The Richest Member Is Wealthier Than The Rest Combined
By Hugh McIntyre
Doja Cat Wore Surrealist-Inspired Schiaparelli To The BBMAs
By Dominique Norman
Get Even More From Bustle — Sign Up For The Newsletter