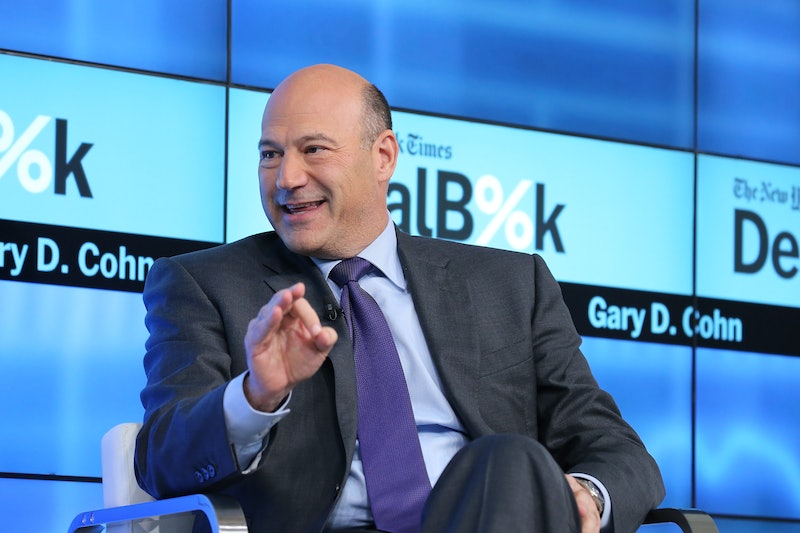 President-elect Donald Trump has named another Goldman Sachs executive to a top post in his administration — Goldman Sachs president and COO Gary Cohn will serve as the National Economic Council Director, according to new reports from CNBC. Neither Trump nor his staff has released an official statement confirming the selection yet.

According to NPR, the National Economic Council is in charge of coordinating economic policy across the wide government bureaucracy of Washington. The group, comprised of heads of other government agencies and the director, makes sure that the administration's economic policy is internally consist in all areas, including agriculture, commerce, energy, financial markets, fiscal policy, health care, labor, and Social Security. It's easily confused with the Council of Economic Advisors, but while the CEA directly advises the president on economic policy, the NEC makes sure that the president's economic agenda is enforced across his administration.

Cohn is a politically intriguing choice for Trump's administration. Cohn is actually a registered Democrat who donated $275,000 to Hillary Clinton and Barack Obama over the years, but also $250,000 to Marco Rubio during this campaign cycle. He even allegedly instructed Goldman executives that they were not to give money to Trump's campaign directly, but to donate to the Republican National Committee instead. Cohn won't be the first former Trump opponent to join the administration, but the potential clash between the two businessmen's economic policy beliefs could have a strong impact on how the next four years plays out for the economy.

In light of Trump's own struggles over business conflicts of interest, Cohn's potential conflicts may set an interesting precedent for the administration. According to Bloomberg, Cohn owns over $175 million in Goldman Sachs stock, which he should have to sell once he takes the position in January. However, the lack of enforcement over the administration's numerous potential conflicts of interest means Cohn could be in charge of setting policy that directly benefits him. The Office of Government Ethics, which is in charge of enforcing the Executive Branch's rules for conflicts of interest, has been relatively silent save one Twitter rant at Trump, so there's no telling whether or not the office will go after Cohn at all.

Cohn's appointment has already drawn significant opposition online for its apparent contradiction to Trump's "drain the swamp" campaign promise to end the alleged political corruption of Washington. Yet the choice of another wealthy Wall Street financier to a top economic advisory post indicates once more that that goal isn't one of high relevance for Trump. Cohn as NEC director implies that Trump is officially breaking one more promise to the people who supported him.