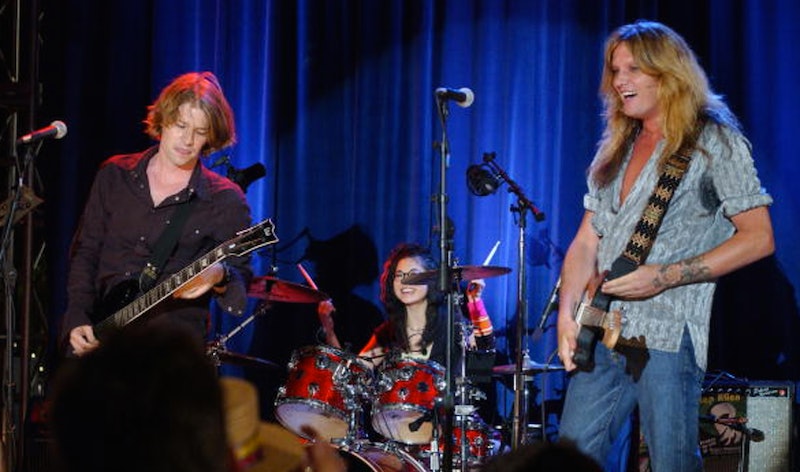 If you keep up with all things Gilmore Girls, you might have already read that Sebastian Bach — who plays Gil, a guitarist in Lane's band Hep Alien on the show — believes that the fictional band needs to play a very real concert. That's something that filled me with such joy that I jumped straight on this bandwagon (#sorrynotsorry). Yup, I'm agitating for change, not via a petition or writing to my congressman, but via an all-important listicle. Have these 11 reasons Hep Alien need to play a real-life concert. Read it, share it, and tattoo it on your eyeballs. You know I'm right.

During an interview with US Weekly, Bach commented:

We get a lot of Hep Alien fans coming to my concerts across the country, and between songs, I’ll start ‘Hollaback Girl’ and the whole crowd finishes it for me. The whole place sings it. I think there’s a demand for that!

Same. Not only did Hep Alien give Stars Hollow some much-needed punk rock edge, but they were also adorable. They weren't always the most talented band in the world, but they were always passionate about what they were doing and always caring towards each other. For me, at least, they provided the blueprint for how your teen band side-project should be: incredibly fun. So without further ado, let me convince you.

1. Because Sebastian Bach Is A Professional Musician, So You Know It'll Be Amazing

True facts: long before Bach ever heard of Stars Hollow, he was the frontman for the heavy metal band Skid Row between 1987 and 1996. His first record with the band, the 1989 album also titled Skid Row, sold over 2 million copies that year. This wasn't some goofy side project; this was a commercial success. We know Bach's got the charisma to make sure this fictional band can keep it tight when it comes to a real concert. This said, it's worth conceding that Bach, “for all of his rock ‘n’ roll charisma, barely knows how to hold a guitar," so maybe it would be worth keeping him to supporting vocals...

2. Because I Missed The Hep Alien Surprise Concert And You Probably Did, Too

You guys, I hate to break it to you: but the real Hep Alien concert already happened. It was a surprise performance at the ATX Television Festival in summer 2015, and it featured Keiko Agena (Lane), Todd Lowe (Zack), and John Cabrera (Brian) playing alongside the real-life Dave Rygalski. Nope, not the Dave on the show, the guy who played bass off-stage any time you saw Cabrera playing his guitar. But, yeah, unless you were lucky enough to just so happen to be there, you missed it. Same. Hep Alien needs to give the many rabid Hep Alien fans of this world the chance to buy tickets to another concert of theirs.

3. And, Speaking Of Which, Because They Clearly Had So Much Fun Performing Last Time Round

I'm not saying we'd be doing the band a favor by going to see them... but, I mean, look at the above. Look how happy they are. I'm just saying it would be a win/win for both the musicians and the audience.

4. Because It Would Be Cool To See How Well The Actors Can Play Their Instruments

According to the Huffington Post, Cabrera “didn’t play the bass at all” when he first got cast as a member of Hep Alien, but, by the end of the show, he could finger bass lines. The same article reports that Keiko Agena took drumming lessons so that she could play her instrument for real. All that method acting shouldn't go to waste. Here's to us actually getting to see the fruits of our favorite thespians' labor in live concert form.

5. Because They Have Famous Fans

OK, well, at least one famous fan confirmed, anyway. The same Huffington Post article confirmed that Geddy Lee’s daughter “was a huge, huge fan of the show.” This resulted in a set visit from Geddy Lee (the lead singer for Rush), and an intense response from the cast, with Cabrera stating, “He came to the show and he was like a rock god, even to Sebastian, who was equally as starstruck having him there.”

6. Because Then We Can Pretend To Be In Stars Hollow For Real

The beauty of the Gilmore Girls lies, in part, in how marvelously immersive the show is. If you did a few days of marathoning the show in time for the Netflix revival, you'll know that, after a few hours, somehow Stars Hollow starts feeling realer than, well, actual reality. Watching a Hep Alien concert would surely be the best shortcut to that feeling — and what could feel better than that?

7. Because They're Masters At Feel-Good Music

Radiohead they ain't. Hep Alien, while punky in tone, always stuck to covers of songs that were energetic and upbeat. This is exactly the music I want to rock out to after such a horrorshow of a year.

8. Because, In Lane's Fictional Life After The Show According to Agena, She Kept On Making Music

When asked about what she thought would happen with Lane's music career after the show ended, Agena said "in my mind I think that Lane wouldn’t have been able to stop that creative push. Because nothing was able to stop that, it didn’t seem like it, in her storylines." A live concert would be a great way of life reflecting art.

9. Because Keiko Agena Appreciates Her Fans As Much As An Actual Musician Probably Would

If you're in an underappreciated indie band, you get really passionate about your fans. It sounds like, although Hep Alien was fictional, Agena's got almost as much love for her fans as if Hep Alien really was her passionate project. She told Gilmore News:

There are all these little moments that I think the fans are amazing that they notice it. I think, in my mind, Hep Alien is one of those things that they just like. There are all these moments in Gilmore girls that it’s just this eclectic off-the-main-road item. The fact that the fans like it is sweet, and it’s a testament to them how much they pay attention and invest in that.

If she loves her fans this much, she needs to meet them in person — by playing live in front of us.

10. It Would Be A Great Way Of Bridging The Gap Between The Revival And The Movie/Further Episodes Scott Patterson Has Mentioned There Have Been "Some Conversations" About

Whether they opt for a movie or more episodes, this would take years surely? First, it would need to get written and then shot and then cut and then marketed. A Hep Alien real-life reunion would be a good way to hold fans' attention while they waited.

11. Because There's A Possibility I'd Get To See My Imaginary Boyfriend Adam Brody In The Flesh

Remember how the ever-beautiful Adam Brody was in Hep Alien for a hot second? No? Well, take my word for it. Or read this. Anyways, there's always the chance that Brody would come along for the ride if there was a live concert, or, even better, a tour. Sure, it's a slim chance, but one I'm willing to bet on.

The world is a nostalgic place right now but not all nostalgia is bad. Hep Alien were a lesson come to life about working hard, staying focused, and having fun with your friends all at once. That's the sort of lesson I'd love to experience in person. Here's hoping Bach's words fire up the fictional band to make our dream a reality.