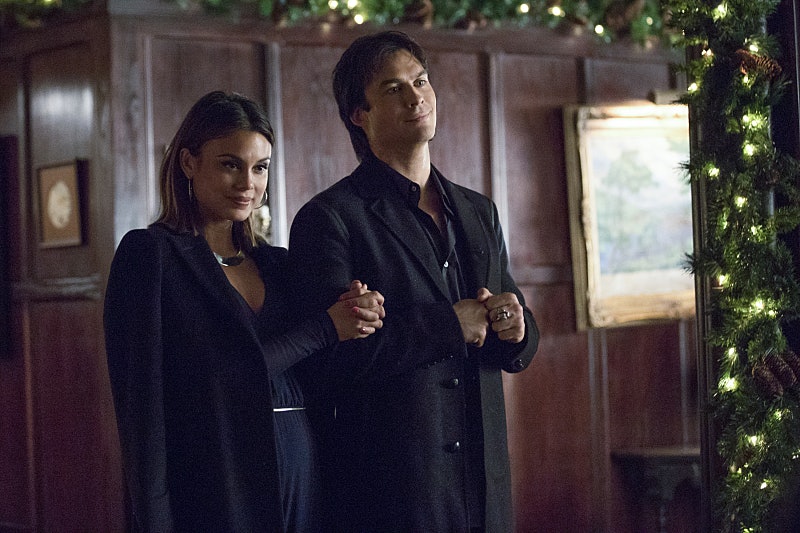 It was a rough Christmas at the Salvatore home on The Vampire Diaries ' mid-season finale, "The Next Time I Hurt Somebody, It Could Be You." A very much not dead Damon (his deal with Cade made him immortal) crashed Caroline and Stefan's Christmas dinner, with Sybil the Siren in tow to join in on the fun. After staking Stefan to give him a one-on-one with Cade, Damon went on to terrorize Caroline's human guests, Matt and his dad, throughout dinner. But, things really got heated later in the night, when Damon ripped out Sybil's heart in the middle of the street. So, is Sybil really dead on The Vampire Diaries ?

Before we get to whether or not Sybil really is dead, let's start with the good news. Delena fans will be elated to know that Damon was finally able to break free from Sybil's hold over him and rip her heart out, all thanks to Elena. Even though Damon and Sybil were awful Christmas dinner guests, Caroline still had gifts for both of them. Damon's gift, she said, wasn't for him, it was for the Damon who would one day be begging for her forgiveness. Later, Sybil claimed the gift as her own and opened it, only to find Elena's necklace inside. While putting it around her neck, Damon flashed back to Elena and he just ripped Sybil's heart out, left her sitting on a bench, grabbed the necklace, and walked away.

Now, don't get all excited just yet. Unfortunately, like Damon's "death" last week, it looks like Sybil's death is only temporary. Yes, her heart might be out of her body, but she was also seen walking and talking in the preview for the second half of the season. Fans should remember that as part of her deal with Cade, Sybil is keeping her immortality — for what, we don't really know — so I guess it's safe to say that even ripping out her heart won't keep her down forever. Knowing this, it looks like Damon just wanted her out of the picture when he started serving the devil with Stefan. He might have turned off his humanity, but this was his idea, and, no matter what he says, if there's one thing we know about Damon it's that he loves his brother.

Whatever it is Damon was thinking when he ripped out Sybil's heart, we won't find out until The Vampire Diaries returns in January.