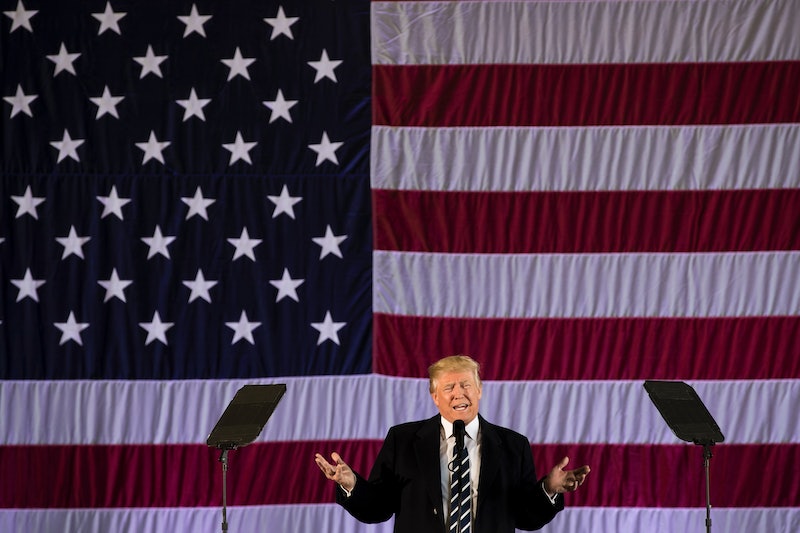 President-elect Donald Trump made a lot of promises throughout his campaign, from volunteering Mexico to pay for a new wall at the border to dismantling the Affordable Care Act. But as Trump's wish list for America grew, the details of how, exactly, he'll see all these pledges to fruition became increasingly sparse. So as Trump takes office, there will be a lot of question marks looming over his presidency that you should look out for as answers. Here are eight issues that you should pay attention to during the Trump administration.

Trump is assuming an office that is more powerful than ever before. Under President Obama, who used his position to bypass a Republican-majority Congress, executive power reached new heights. Those precedents and the ability to affect change nearly single-handedly will now be inherited by Trump, who has made very little clear about what he actually plans for America other than greatness. The next four years — and possibly the next eight — could be a defining point in American history. It's important, then, to stay vigilant and keep the government accountable by staying informed on the issues. Here are a few them to watch closely.

Congressional Republicans are champing at the bit to repeal the Affordable Care Act, a move that Donald Trump promised while he was on the campaign travel. Tom Price, a George representative and fierce Obamacare critic, is Trump's pick for health secretary. So the future of Obamacare is very much up in the air.

Still, don't expect it to disappear overnight. House Speaker Paul Ryan laid out a "repeal and delay" strategy to Vice President-elect Mike Pence last week. As The New York Times notes, this indicates that lawmakers understand that replacing the law could be "technically complicated and could be politically explosive."

The wall might be Trump's most referenced plan, but the president-elect has said a lot about how he plans to overhaul immigration in the United States. Trump promised several times during the election that he would deport 11 million undocumented immigrants living in the U.S. As the Economist notes, if Trump stays in the office for eight years he could feasibly deport up to four million people by reversing several of Obama's executive orders, including reversing the Deferred Action for Childhood Arrivals.

The Economist also detailed that Trump, who has promised to target undocumented immigrants with criminal records, could potentially expand what constitutes criminality. The Migration Policy Institute estimates that there are around 820,000 such undocumented immigrants in the U.S., but if the net is widened by Trump, it could encompass up between two to three million people.

Trump has flip-flopped on the history Paris Agreement, a global action plan to minimize climate change. In late November, he said that he had an "open mind" about the agreement, which the U.S. signed on to under Obama. Previously, though, Trump said that he would pull out of the agreement, effectively undoing one of the biggest global moves to protect the environment.

Any confidence that could have been given by Trump's "open mind" were completely derailed by Trump's pick to lead the Evironmental Protection Program. Scott Pruitt, the Oklahoma attorney general who has close ties to the fossil fuel industry, is one of the major driving forces behind a legal battle again Obama's climate change policies and isn't convinced of the legitimacy of climate change. Ken Cook, head of the Environmental Working Group, told The New York Times that Pruitt could be the "most hostile" EPA head toward clear air and safe drinking water.

There have already been an indirect effect of the Trump presidency on abortion access. Some Ohio lawmakers have cited Trump's election as an emboldening moment that caused them to pass the so-called "heartbeat bill," a measure that would prohibit abortion after a fetal heartbeat could be detected (around six weeks). That bill passed through the Ohio House and Senate and waits on a signature from Republican Gov. John Kasich.

That certainly wasn't a directive from Trump (who has, as with many issues, showed several shades of opposition throughout his campaign), but it does speak to the effect that his rhetoric has had so far. Not to mention that his second-in-command, Pence, worked tirelessly to defund Planned Parenthood and signed and championed anti-abortion legislation during his time as governor of Indiana.

Even before taking the oath of office, Trump has already broken presidential precedent in the way that he has handled foreign interactions. Throughout his candidacy, he has expressed admiration for Russian President Vladimir Putin. He angered China when he took a call with Taiwan President Tsai Ing-Wen, which considers Taiwan a province, which the Chinese government has suggested is a move due to lack of experience. Experts have already started to fear major problems with the Chinese-American relations if Trump continues on the same path.

6. Freedom of the press

Trump made his relationship to the press very clear throughout his campaign: If he likes the coverage, then it's fair; if it was unfavorable, then he threatened to sue. In February, he threatened to open up libel laws so that public figures could successfully sue media companies, something he reiterated in October.

The Columbia Journalism Review pointed out that if Trump weakens the freedom of the press in the U.S., it could have ripple effects around the world. "The US [sic] record is far from perfect," Joel Simon wrote. "But when America stands up for persecuted journalists around the world, it can still make an enormous difference." So if the idea of press freedom is compromised in the U.S., negotiations that the U.S. helps around the world could be thwarted.

Trump made waves in July when he linked Black Lives Matter to the instigation of police killings, and accused the group of "essentially calling death to the police." Trump didn't give Bill O'Reilly a straight answer when he asked if his attorney general would investigate the group, instead offering that, "At a minimum, we're going to have to be watching because that's really bad stuff and it's happened more than once."

Although he spent a fair amount of time criticizing Hillary Clinton for giving a private speech to Goldman Sachs, banks will probably be one of the biggest beneficiaries of a Trump candidacies. "We believe President-elect Donald Trump's political agenda — which includes deregulation, lower taxes, increased spending, and a bias for higher interest rates — paves the road to the most favorable macroeconomic environment for financials since before the financial crisis," analyst at FBR Capital Markets said in a note to CNBC.

But, as Vox's Timothy B. Lee wrote, Trump's planned deregulation of banks "could eventually lead to another 2008-style financial crisis." Lee further notes that the Trump's proposed economic strategy could particularly affect historically disenfranchised groups such as poor people and immigrants. So it's looking like what could be good for the banks won't be good for the people.