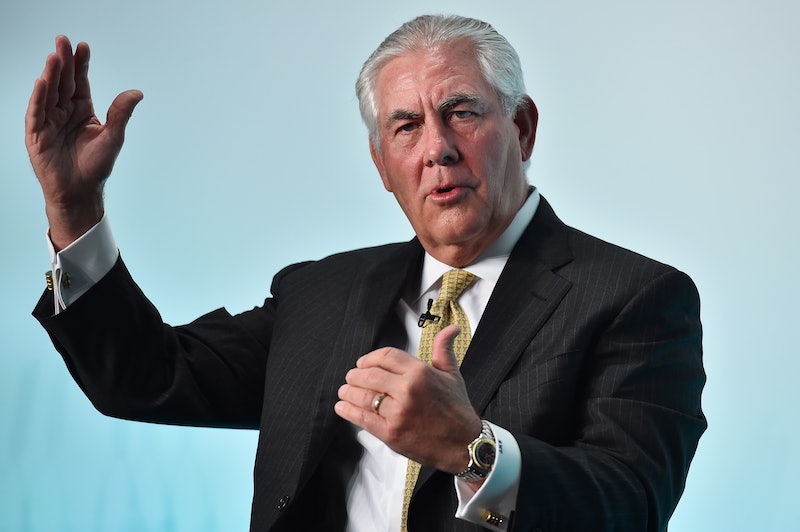 On Saturday, news broke that reportedly President-elect Donald Trump's secretary of state pick will be Rex Tillerson. The New York Times reported that Tillerson, who is the chief executive of Exxon Mobile, will be Trump's selection for the coveted cabinet position, according to two sources close to the transition team. According to the Times report, Tillerson met with the president-elect in Trump Tower for two hours on Saturday. Tillerson has been at Exxon Mobile for more than 40 years. The Times noted that Trump's communications director, Jason Miller, declined to comment on whether Tillerson would be Trump's nominee for secretary of state and the article added that, "Mr. Trump is famously mercurial and could change his mind before making his final decision public."

According to the Times, Tillerson has a congenial relationship with Vladimir Putin, who awarded Tillerson Russia's Order of Friendship in 2013.

The secretary of state role has arguably been the most talked-about position in Trump's cabinet and has been a subject of speculation since he was elected president. Former New York City Mayor Rudy Giuliani and former Massachusetts governor and Republican presidential nominee Mitt Romney were considered leading contender. On Friday, both Giuliani and the Trump transition team declared that he was no longer in the running for the coveted cabinet post.

Trump's outrageous pick of Rex Tillerson to be Secretary of State demonstrates once again that he lied to the country about draining the swamp, and he's turning the government over to the same Wall Street bankers, Washington insiders and special interests he railed against during the campaign. It’s also another victory for Vladimir Putin, who interfered in our election to help elect Trump and now has a close ally with no foreign policy experience serving as America’s top diplomat.

According to the New York Times report, Trump's senior adviser, Steve Bannon, and Jared Kushner, his son-in-law, told the president-elect that Tillerson was in a “different league.”