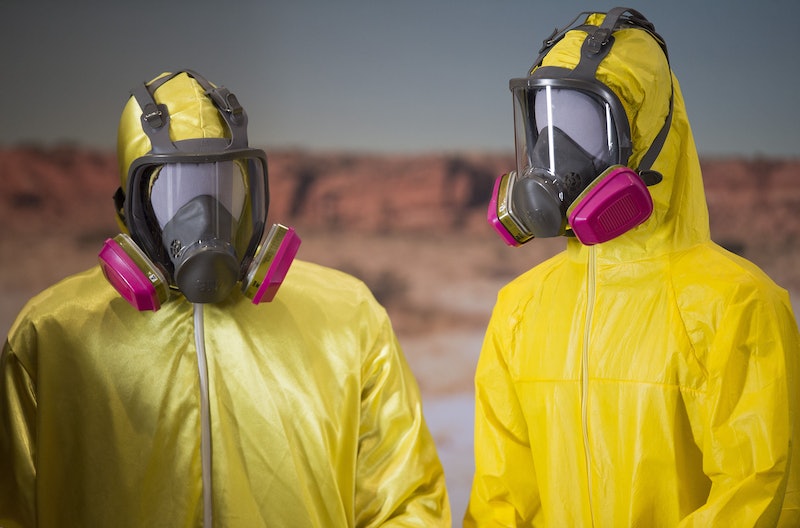 Saturday Night Live got too real during its latest cold open about Donald Trump's next Cabinet appointment, highlighting the seemingly ceaseless irony of the president-elect's controversial team of advisers. Bryan Cranston made a guest appearance to reprise his beloved role as high school science teacher/drug kingpin Walter White, whose new duties since the end of Breaking Bad include heading up the Drug Enforcement Agency in Donald Trump's imminent administration. But in between laughs and puns about the red, white, and blue crystal, the sketch reminded everyone that the jokes were scarily on point about Trump's actual Cabinet.

Though the sketch felt a little dated at first (since Breaking Bad ended in 2013), it was perfectly on point when it comes to the irony of Trump's latest Cabinet appointments, a few of which were referenced in the sketch. Myron Ebell, the new head of the EPA, doesn't believe that human activity contributes to climate change. Secretary of Labor pick Andy Puzder opposes basic protections for workers. Secretary of Education pick Betsy DeVos believes in privatizing public education through charter schools. Along this same logic, a drug dealer and manufacturer would certainly be an apt head of the DEA — the resurrection of Cranston's character was a little more apropos when you realized just how well it fit the pattern of Trump's choices for top advisors.

Trump still has quite a few appointed positions to fill, and though his potential picks will have a tough time being as controversial as an international drug dealer, you certainly never know. The latest rumored appointment to send the country into a fresh wave of collective "WTF"s was Exxon Mobil CEO Rex Tillerson, whose close ties with the Russian government are an even bigger problem now that the CIA announced that Vladimir Putin's government allegedly interfered with the presidential election for the specific purpose of helping Trump win. The appointment of a Putin chum to one of the highest positions in the federal government would be concerning enough without this recent revelation from the country's foreign intelligence agency — if Trump still moves forward with the announcement in light of the news about Russia, it could have very dangerous implications for the future of American democracy.

The cold open was objectively hilarious, thanks in large part to Kate McKinnon's never-ending brilliance as Trump campaign manager Kellyanne Conway, but it was the kind of funny that makes you laugh at first before you dissolve into ugly sobs and curl up in the fetal position. There are some things, like the fraying fabric of American democracy, that SNL can only do so much with. Nevertheless, it's still nice to have the show's whip smart satire to bring a little levity to this ongoing political clusterf*ck.