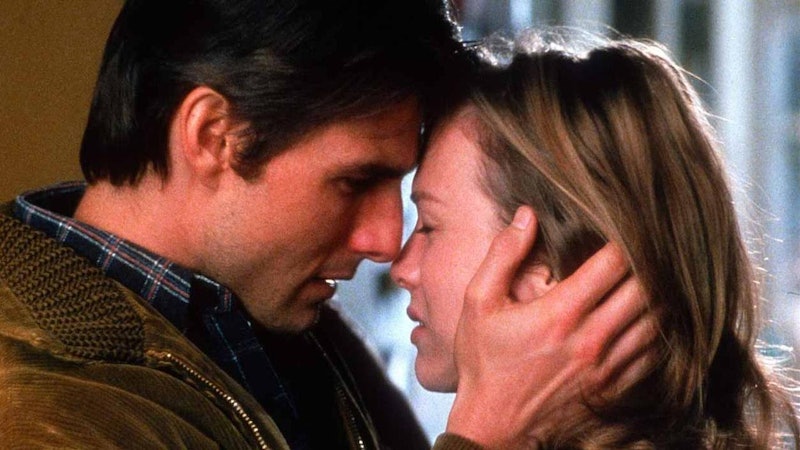 I was too young to be admitted to R-rated movies when the Cameron Crowe dramedy Jerry Maguire came out 20 years ago. But I latched onto it anyway, begging my parents to allow me to at least rent the VHS from Blockbuster once Jerry Maguire made it to home video. I don't know why I was so intent on seeing it, exactly. Some combination of mid-'90s Tom Cruise, that Bruce Springsteen song that played over the trailer, and Cuba Gooding Jr.'s charmingly exuberant performance made Jerry Maguire a must-see for 13-year-old me. Also, I was at that age and still am the target audience for a good romantic comedy. Jerry Maguire was the first grown-up romantic comedy I'd ever seen. And it was the last too.

Jerry Maguire is a grown-up romantic comedy because the love story isn't even the most important part of the plot. First and foremost, it's a character study. Cruise plays the lead role of a high-powered sports agent who has a late-night crisis of conscience. In a fit of inspiration, he writes, copies, and distributes a memo to everyone at his company, proposing that they cut down on clients and revenue in order to be a little more like people and less like sharks. Jerry is promptly fired by his smug former protege and then heads out on his own, retaining just two clients: Arizona Cardinals wide receiver Rod Tidwell (Gooding Jr.) and superstar college quarterback Frank Cushman (Jerry O'Connell). He's not completely alone in this endeavor, however. Jerry is joined at his fledgling "firm" by Dorothy Boyd (Renee Zellweger), an accountant who was moved by his rash declarations and, to be honest, a little dazzled by his smile.

Zellweger is terrific as a single mother who hasn't had the luxury of being spontaneous in a very long time. But this is Jerry's movie; the title doesn't lie. "Breakdown?" he narrates as he breaks out into the night sweats that lead to typing out his mission statement. "Breakthrough." Crowe wrote a piece for The Guardian in 1999 about his favorite classic film director Billy Wilder and how The Apartment is the Wilder movie that's had the most impact on his career. In The Apartment, Jack Lemmon plays an insurance company drone who becomes disillusioned with the rat race and tries like hell to regain his humanity. The parallels between Lemmon's character and Jerry are obvious. Crowe even wanted Wilder (who died in 2002) to play Jerry's mentor Dicky Fox in the movie.

Two decades later, Jerry Maguire is still among my favorite movies. There's so much more to it than "You had me at hello" and "Show me the money," though, it's pretty impressive how many catchphrases it launched. The evolution of Rod Tidwell earned Gooding Jr. an Oscar. And it's interesting how, though he and Jerry are both surrounded by men in their work, neither of them seem to have more than surface-level relationships with any of them. By the end of the movie, Jerry and Rod have solidified themselves not just as partners, but as true and supportive friends. Part of what makes a romantic comedy great is placing the couple in a genuine world and showing how they individually relate to others. Too often in less well-crafted rom-coms, supporting characters only exist so that the lead has someone to talk to about their dating woes. And that's just bad storytelling, no matter the genre.

Not that Jerry and Dorothy don't use their friends as sounding boards. I identify most in this movie with Dorothy's skeptical sister Laurel (Bonnie Hunt, good in everything); you can't blame her for struggling to be supportive when her sister (who's already living with her) leaves her steady, corporate job to follow an early mid-life crisis out into uncertainty. Dorothy then starts dating that early mid-life crisis, even though Jerry has just been jettisoned from a long-term relationship and obviously still has some personal business to figure out. ("Dorothy, this guy would go home with a gardening tool if it showed interest.") And it's Rod who memorably tells Jerry it's against good guy policy to "shoplift the pootie from a single mother." He can see that Jerry fell faster for the idea of Dorothy and of being a dad to her son Ray (Jonathan Lipnicki) faster than he fell for Dorothy herself. And that's not fair to a woman who thinks he's right there with her.

Jerry Maguire is a romantic comedy for adults because it is not a fairy tale. As an idealistic teenager, I had my doubts about the viability of Dorothy and Jerry's relationship, even after he storms into Laurel's divorced women's group to tell Dorothy that she "completes" him at the end of the movie. When the audience first meets Jerry, he's lost and looking for something. I worry still that he's putting the pressure on Dorothy to make him a better man, even if his intentions are pure. ("What do you want from me? My soul?" "Why not? I deserve that much.") When I saw this movie for the first time, my concept of what a romantic comedy is changed. I used to think every romance had to be timeless and indestructible. Now I think it's more realistic to include those transient unions — what's more grown-up than accepting that most romantic relationships are flawed and temporary?

I realize I'm making it sound like Jerry Maguire is a depressing movie. I don't believe it is. It's a film about people who reconnect and recommit to their dreams. Jerry can still be the "king of the living room" without being hated by the families of his overworked clients. Dorothy can provide for her son and still "be inspired." Rod can have the fame he wants, but still have fun playing the game. All three main characters take leaps of faith and are rewarded for it by ending up in a better place.

Jerry Maguire has the hallmarks of a romantic comedy, up to and including the final grand gesture. But it stands out to me mostly as a movie that's about adults with adult problems. At 20 years old, Jerry Maguire isn't dated. But today it would be a box office risk. Jerry Maguire is the last bastion of a type of film that's been buried by the business. And that's ironic, given its themes of integrity and taking chances.

The 20th anniversary Blu-ray of Jerry Maguire will be released Jan 3.