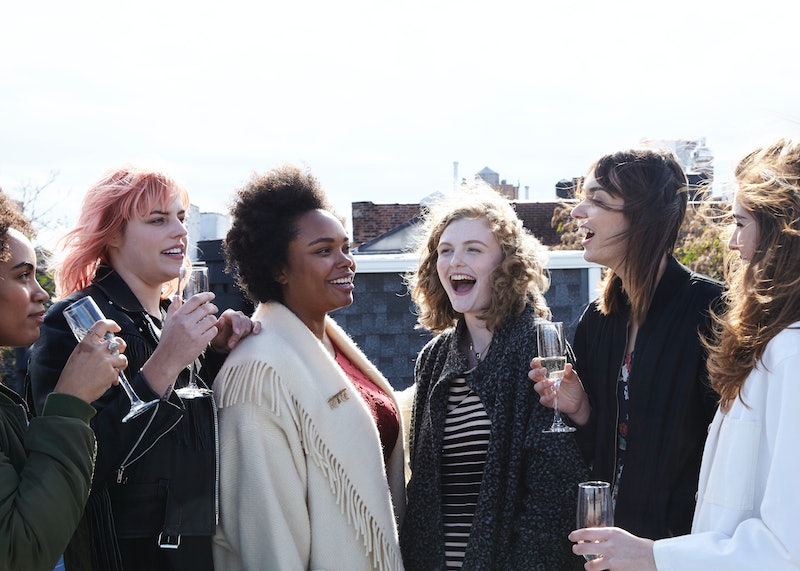 As the end of the year draws near, it's only natural to look back over the progress we've made in the last 365 days and ask ourselves how we can do do even better moving forward. For feminists, that question is the first step down a path exploring ways to expand the scope of your feminism in the new year. Because, really, how effective (and affecting, while we're at it) can the movement be if it fails to address the experiences of all those who need it?

Where feminism is concerned, 2016 has been a bit of a mixed bag. On the one hand, we had the first woman ever to run for President as a major party candidate (and who received millions of votes, mind you). On the other hand, the man who was elected is openly misogynistic, sexist, racist, and xenophobic, with a history of objectifying, demeaning, and marginalizing everyone who isn't a white, straight, cisgender dude. Now, more than ever, we need feminism. However, we need to be sure the feminism we take up as our mantle during this time is intersectional. Otherwise, the message of solidarity we're sending out will only reach privileged — and, for the most part, white — people.

You may recognize this as "white feminism," and it's a huge reason why expanding the scope of our feminism moving forward is so very important. During a time when the rights of so very many people are in such danger, we need to recognize that the ways in which people of color, people in the LGBTQ community, people with disabilities, and so many others experience oppression and marginalization can be very different. Only when we acknowledge this can we effectively work together to address the many forms of inequality in the world — hopefully changing it all for the better.

We may have suffered a rough year in 2016, but moving into 2017, we have an extraordinary opportunity to change the narrative surrounding feminism of the future. If you're looking to expand the scope of your own feminism, here are a few things you can do.

Because no two experiences are the same and everyone's feminism is different, it can be difficult to truly understand someone else's perspective without a dialogue. Know that it is not their job to help you understand, but if they are open to having a discussion with you, ask questions and then — this is crucial — listen. Don't listen while your already thinking of your next question. Really listen.

Read, read, read, read, read. If you've already begun educating yourself through frank conversations with other feminists, it's time to hit the books, the internet, the newspaper — all of it. Devour any literature you can get your hand on about the experiences of non-white, non-heterosexual, non-cisgender people in history. Research statistics on how people of color and people in the LGBTQ community are affected by sexism and misogyny. Read the Killroys list of plays by women and trans writers. Read works by people of color, people with disabilities, and LGBTQ people. Look at history through a lens that isn't white-washed, male, and able bodied.

4. And Don't Let Your Narrative Mask Someone Else's

Remember that you can be an ally to women, or people of color, or people in the LGBTQ community (or people with disabilities or mental illness, older people, immigrants, etc.), but remember that you don't necessarily speak for them. Instead, clear the way and help provide a platform — and then let those who are often silenced use it to speak.

5. Embrace the Fact That Feminism Has Many Different Faces

There is no one right way to be a feminist. Feminists come in all different sizes, ages, colors, and genders. Not only that, but feminists come from all different occupations and lifestyles, too. For example, a woman who is a stay-at-home mom and likes to cook her husband dinner every night is not a lesser feminist because her choices look different than yours. They are her choices, and the beauty of feminism is that we are fighting for all people to have the right to make whatever choices suit them.

6. Make A Conscious Effort Not To Leave People Out

In the grand narrative of feminism, people who do not identify as cisgender are often left out. Sometimes it's simply by oversight, but it can also be indicative of a larger lack of inclusion. The fact that a woman wasn't born with ovaries doesn't invalidate her womanhood. And this is just one example — as the saying goes, my feminism will be intersectional or it will be BS.

7. Diversify What You Read and Watch

When the information you consume on a daily basis is all filtered through a lens lacking diversity, you lose touch with those who are marginalized. In fact, it is because of this systematic marginalization that their voices can be harder to find. Still, it's important that you do find them. Listen to radio shows led by women, people of color, and LGBTQ people. Watch TV and talk shows depicting people who don't look like you or talk like you. Paint your perspective with a broader brush stroke.

Most of us experience some form of privilege. I'm a straight, white, cisgender woman from a middle-class background, and I am aware this give me a whole lot of privileges not everyone has. No one really cares which bathroom I go to when I'm out and about in public. I don't have to worry that if something happens to my husband that I won't have the right to make medical decisions. Just because a certain type of oppression is not on my radar doesn't mean it doesn't exist.

I'm part of a secret (and several million strong) group of feminists on Facebook, and this is a problem I see rear its ugly head often. When a woman of color or LGBTQ woman tries to better explain privilege or address how one woman's advocacy could be hindering another's, some women — and specifically some white women of privilege — routinely get defensive. Here's the thing, though: We can't get defensive. Becoming defensive when someone points out privilege in action is what stops feminism in its track. It all goes back to the first point: Listen. Listen, take the criticism, and then work to address it.

10. Be OK with Making Mistakes

No one is perfect, and feminism asks that we all be a little more forgiving of ourselves. Why? Because it's a learning process, and one of life's biggest teachers is learning from our mistakes.

More like this
Beyoncé & Madonna’s “Break My Soul” Remix Honors A Group Of Black Icons
By Stephanie Topacio Long
Charlene White & MPs Lead Tributes For Bristol Bus Boycott Organiser Roy Hackett
By Sam Ramsden
Here’s Your Daily Horoscope For August 8, 2022
By Mecca Woods
TikTok’s #NapkinChallenge Is The Chaotic Good You’ve Been Missing
By Sophia Moore
Get Even More From Bustle — Sign Up For The Newsletter