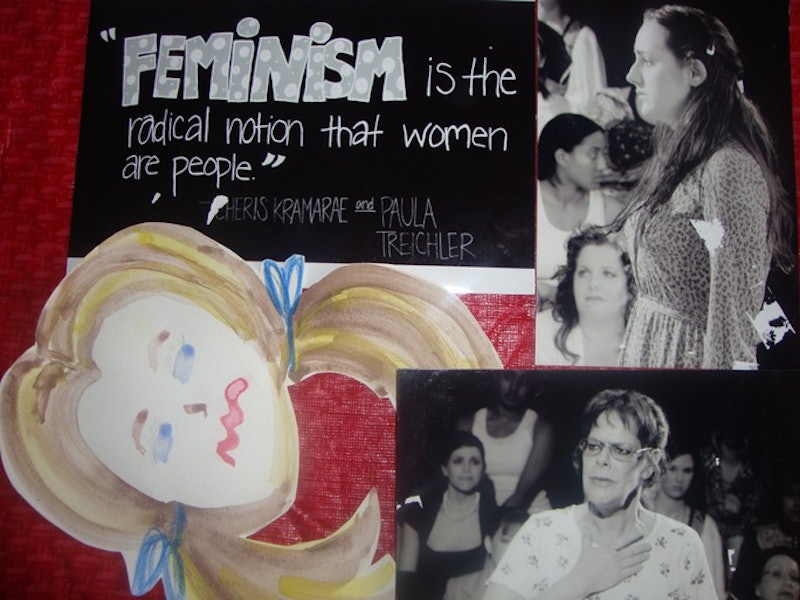 A recent blog post on WatStory by Sloka Chatterjee addresses a question that people often have for feminists: Why do we say "feminist," not "equalist"? After all, if feminism should be for everybody, why does it include the syllable "fem"? If it's for equality, why does it allude to one gender and not any others?

The truth is, feminism does strive to include everyone, including men and non-binary people. It also attempts to help people of marginalized races, sexualities, and other identity categories.

But the word "feminism" doesn't contradict that. The feminist movement started in order to help women attain equality, and it reflects the fact that women have historically been disenfranchised and silenced, but feminism isn't trying to raise women and gender minorities up above men. I's trying to bring them up to the same level.

When people take issue with the word "feminism," they're usually really taking issue with the movement. As Chatterjee points out, self-described "equalists" and "egalitarians" often give some suspicious-sounding reasons for not identifying with feminism, like "'feminism' sounds pro-women and 'equalism' is, well... equal!" In cases like these, their focus on the word disguises the fact that they're uncomfortable with the idea of furthering women's rights or forgoing tradition — in other words, they're opposed to feminism itself.

Here are some reasons why feminists continue to identify with the term rather than backing down and using a different one.

As Sian Ferguson points out atEveryday Feminism, feminism isn't just about fighting the patriarchy anymore. It's evolved to combat the entire "kyriarchy" — a hierarchical system that places men above women and non-binary people, white people above those of other races, people above non-human animals, and more. The same way an establishment can be called a cafe and serve more than coffee, feminism is advocating for many groups at once.

2. Women And Non-Binary People Are Marginalized

Feminists are certainly not debating the claim that men face stereotypes. In fact, one recent effort of feminism has been to combat toxic masculinity — the standard by which men must be strong, tough, and emotionless. But if you examine gender stereotypes, you'll usually find that they have something in common: They put cis men above women and erase gender-nonconforming people, even if it's to men's detriment. For example, the idea that men should not show emotion is based on the idea that women are more emotional and therefore less rational.

If you look at history, it's pretty clear that men have been in power. Women couldn't even own their own credit cards 50 years ago, and they still can't access reproductive healthcare in many instances. The same way we say "black lives matter" instead of "all lives matter," we say "feminism" instead of "equalism" not because certain groups deserve more privileges but because they don't have them yet.

3. The Movement Has Been Called Feminism For Over A Century

The first recorded use of the word "feminism" was in 1852, and the early movement shares a lot with its current iteration. While that particular use was derogatory, a newspaper in 1914 described feminism as a term that "embodies women's rights," and it still does. To change the movement's name would be to rewrite history.

4. To Disavow Feminism Would Be To Back Down

If feminists were to say, "fine, we're equalists," we'd be giving in to people trying to redefine feminism negatively. Feminists know they have nothing to apologize for. As I mentioned, problems with the term are usually disguised problems with feminism itself. That's evident if you look at the "egalitarianism" subreddit or hashtag, which people use to deny the existence of misogyny and discredit women. The name of the movement isn't really so important, except insofar as changing it would be pretending there was something wrong with it in the first place — and there never was.

5. Because Frankly, It's Exhausting To Keep Having This Debate

Feminism will still be what it is regardless of what we call it. All this debate over semantics takes away from what feminism is trying to do, and so would the effort of rebranding the movement. So can we please just leave the word alone and focus on smashing the kyriarchy? Because that's what we've been here to do all along.