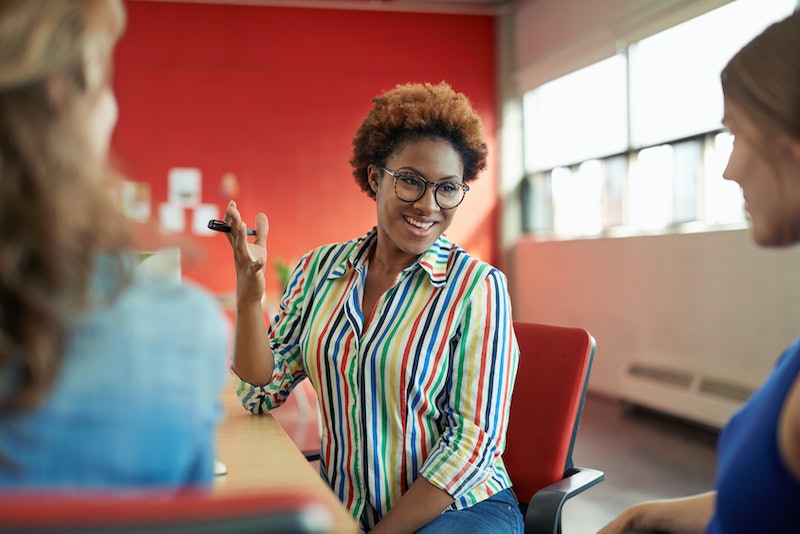 If you're remotely familiar with contemporary feminism, you're no doubt aware of the theory behind intersectional feminism. However, it can be difficult to find ways to make your feminism more intersectional in real life, especially if you're part of a traditionally privileged group. It's no secret that the patriarchy affects everyone differently, but historically, mainstream feminism hasn't done a great job of addressing that fact. Since the birth of the suffragette movement and continuing into the modern day, white, heterosexual women are often the center of discussions concerning gender equality — and that's a problem when it excludes women of other ethnicities, sexualities, and abilities.

Of course, we're all deserving of equality — women, men, and people who don't identify either way — and this so-called "white feminism" rarely intends to exclude women of color. Rather, it's a product of a society that affords certain women advantages from such an early age that they may not recognize their privilege. For instance, take the wage gap. The most commonly cited statistic is that women make 79 cents for every dollar a man makes, and that's true, on average. The actual disparity is hugely dependent on ethnicity: White women make 78 cents and Asian American women make 90 cents for every white man's dollar, but black women make just 63 percent of what white men make — and Latina women make just 54 percent.

Factors like ethnicity and sexuality shape women's experiences in the patriarchy, and that's why acknowledging our differences and privileges is so important. Sometimes that's easier said than done, but if you're looking to introduce intersectional feminism into your daily life, there are plenty of small ways to do so. Let's take a look at 11 below.

1. Recognize That Yours Isn't The Only Experience

Recognizing that everyone's experiences are different is the basis of intersectional feminism; it's pretty difficult to support other women if you don't acknowledge that their lives can be very different from your own.

2. Listen When Other People Speak

As we discussed above, "white feminism" (which is different from feminists-who-are-white) is very rarely intentional. These days, it often manifests in women who try to speak for everyone — so be sure to listen when other people have something to say. Aside from simple politeness, chances are you'll learn something new.

Part of listening to others is letting them finish their trains of thought, especially when it comes to discussions of feminism. Even if you're bursting with the need to chime in with your own story about street harassment, let other people finish talking first.

Intersectional feminism isn't just about ethnicity; it's intended to allow all women the chance to make their voices heard. This includes people who are disabled, and one way to support them is by making an effort to stop using ableist terms like "spastic" and, obviously, "retarded." (Seriously. Don't use it.)

It's not feasible to ask the preferred pronouns of every single person you meet, but remember that there's no way to tell someone is genderqueer just from their appearance. If you're in doubt, ask — and if someone tells you to use certain pronouns, use them. Misgendering someone is The Worst.

6. Look Into The History Of Women Of Color

Traditionally, women are left out of the history books, and this is doubly true for women of color, whose achievements are marginalized and attributed to men even today. Educate yourself by picking up a book about the history of women of color, or even just read an article online.

This isn't to say you should sing the praises of every woman on the planet. We're people, and sometimes that means we're jerks. However, society teaches us to be disproportionately focused on women's appearances, to the point that our bodies are synonymous with our worth as people. Try focusing on other attributes; we get enough comments about our appearances every time we leave the house.

Whether it's watching Beyonce videos for six hours straight, picking up a copy of Chimamanda Ngozi Adichie's Americanah, or retweeting the "Latinas in STEM" Twitter account, supporting women of color can be simpler than you'd think.

It's natural to get defensive in the face of criticism, but if you're not open to the opinions of other people, you'll never learn anything new. This is especially important when it comes to criticism from people with different experiences. As Audre Lorde once wrote, "If I participate, knowingly or otherwise, in my sister's oppression and she calls me on it, to answer her anger with my own only blankets the substance of our exchange with reaction."

Feminism is still a sharply divisive term in some circles, but that's often because people have a skewed idea of what it means. Even though they benefit from the patriarchy in many ways, men need feminism just as much as women. It's not your job to explain feminism to anyone, but taking the time to encourage men to support women's rights can go a long way toward achieving gender equality.

The patriarchy may affect us differently, but in the immortal words of High School Musical, we're all in this together. Society teaches us to turn on other women, but we're never going to achieve true gender equality without supporting each other. One of the most subversive things you can do is to cut women some slack — and that includes yourself.