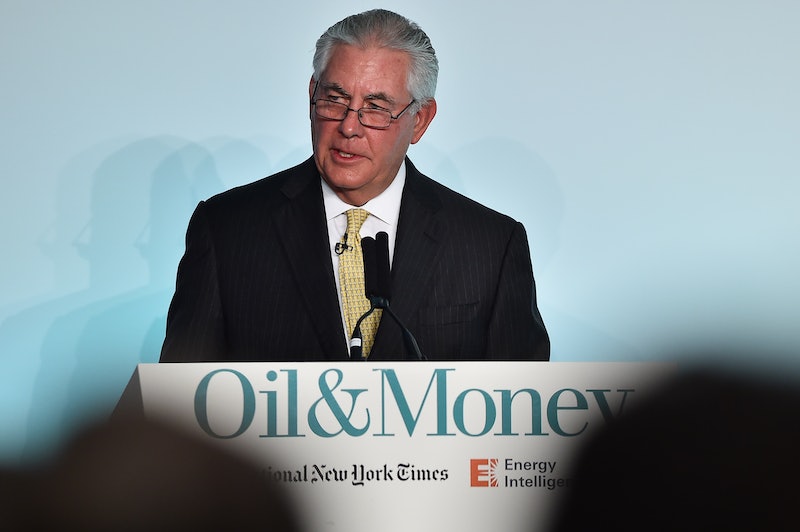 Watching Donald Trump make his cabinet choices has been like watching the bad guys assemble their team in a thriller — or like Ocean's Eleven, if you weren't pulling for George Clooney's side. The latest news of how ExxonMobil's CEO is the likely pick for the venerated position once held by Hillary Clinton and Madeleine Albright has been especially hard to take, but don't despair yet. There are still ways to protest Rex Tillerson being Secretary of State, and you can be absolutely sure that you won't be alone in doing it.

The Secretary of State has to be approved by the Senate, and it's likely that Senate Democrats will make the Republicans work for this appointment. And for good reason — not only is Tillerson's history as an oil executive and lifelong devotee to one company cause for concern, but this is also a guy who literally has received an award from Russia because they like him so much over there.

He also has zero experience in government or diplomacy, although he has worked with foreign countries through years of oil deals. Before you relax and decide that maybe having a state department acting on behalf of oil company instead of the country is an okay thing, have a look at these ways to protest Tillerson's appointment.

Get In Touch With Your Senator

The president's nomination for Secretary of State has to pass through the Senate, so it's up to you to let your senator know how you feel. Either fill out a ready-made protest letter like this one, or go to the Senate contact website and figure out who exactly you need to reach out to from your state. This may seem like a simple case of a Republican majority, but even some Republican senators have expressed their concern about Tillerson. There are no exact reports of who this group includes and whether they would actually vote against him, but so far John McCain and Marco Rubio have both publicly questioned the choice.

There's no guarantee that a petition about this will actually accomplish anything, but it's still worth it to put your name down as an American who opposes having the country's foreign policy run by this man. Trump promised to represent all Americans, so if enough Americans said that this wasn't okay, there's at least a chance that he would feel compelled to listen. Here's one petition from 350.org and another one from ClimateTruth.org, both of which are headed to the White House.

Speak Out Whenever You Can

This is not the time to be quiet because you might annoy a few people on your newsfeed. Let the world know why you think Tillerson is a bad choice for NATO, for the environment, for the U.S.'s relationship with its allies in Europe and elsewhere, for whatever reason means the most to you. Have conversations about it, even with people who disagree with you; post articles on Facebook; tweet what you find. This election has no doubt been giving you plenty of reasons to do this, but now is not the time to stop.

The bottom line with all of these suggestions is to make sure that your voice in opposition is heard. Trump is going into dangerous territory with this pick, and it's absolutely necessary that you don't let him do it quietly.