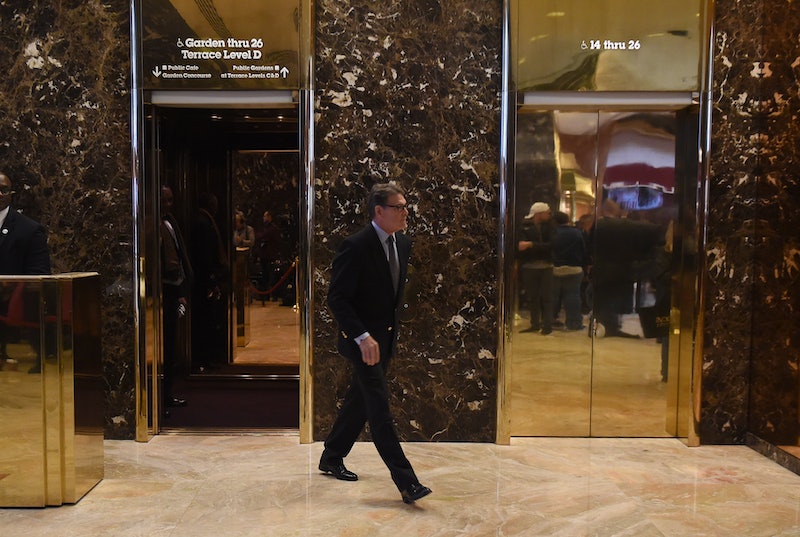 The nation got an early glimpse of what Donald Trump's cabinet could shape up to be soon after the election, when reports revealed that former Texas Gov. Rick Perry was on the short list for Secretary of Energy. The irony of Rick Perry being considered for Secretary of Energy, of course, is that there was a time when Perry apparently wanted to get rid of it, yet also couldn't remember what it was.

The moment in question was one of the Republican presidential primary debates in 2011, when Rick Perry attempted to name three departments that he would get rid of. He got the Department of Commerce, the Department of Education, and... what was that third one, again?

In the end, after a painful moment hemming and hawing, he had to say that he literally could not remember the third department that he wanted to close and attempt to move the conversation on. Rick Perry, of course, did not end up as the Republican presidential candidate in the 2012 election, and there's a good chance that he had that moment to thank for his failure. Remember, 2011 was back in the olden days, when gaffes like that mattered for Republican candidates.

Seriously, though, the fact is that he could become the head of a department that he doesn't believe should exist. Even more so, it wouldn't even be the first instance of this in Trump's leadership team. His choice for EPA head is Scott Pruitt, a lawyer who's spent much of his career focused on overreach lawsuits against the very agency that Trump has now nominated him to lead. Is it just me, or do you see a pattern here? These choices make it clear that effective energy policy, something that often falls into the domain of scientists or people who are otherwise qualified for the position, is not exactly going to be a top priority in the Trump administration. Instead, the president-elect is prioritizing the fossil fuel industry and choosing people who will put it above all else, without paying any attention to the other side.

The Department of Energy isn't exactly a throwaway item. The good people working there deal with things like energy security, nuclear waste cleanup, and scientific and technological innovation in the field of energy. There's an irony to the idea of Rick Perry heading it up, for sure. But there's also something a lot darker and more sinister about giving this position to someone who doesn't have much regard for science, but does have a lot of respect for the fossil fuel industry. Nothing's official on this pick yet, though, so wait and see — maybe you'll get a pleasant surprise.