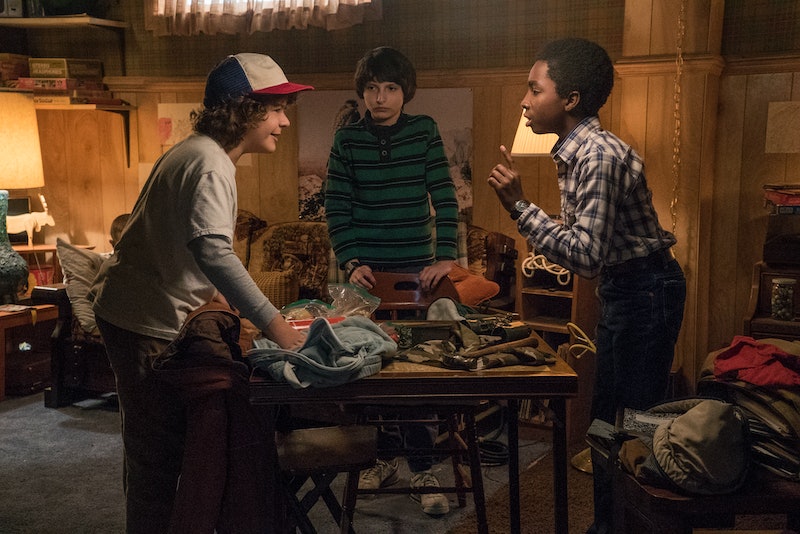 It's a minor miracle that Stranger Things became as popular as it did. It appeared quietly on Netflix one weekend in July without much press, an '80s-throwback science-fiction show that featured an '80s throwback star and a collection of unknown child actors. By the end of July, however, it was the television show that people just couldn't stop talking about. Now, Stranger Things has earned a Golden Globes nomination for Best Drama Series, turning the series that seemed meant for cult hit status into an official mainstream hit.

The Golden Globes are no stranger (pun intended) to nominating geek-friendly sci-fi and fantasy content — this year alone, the Hollywood Foreign Press Association recognized high-concept newcomer Westworld and the frequently nominated Game of Thrones — but Stranger Things is a different beast. Not only is it more horror than science fiction in many ways, but it also doesn't have the benefit of a massive budget like its HBO-based contemporaries. Instead, the little show that could came to the public with an original story, a very unique and nostalgic approach to cinematography and soundtracking, and a whole lot of heart to garner critical acclaim and huge viral success. In a way, the strange thing about Stranger Things' nomination is that it happened at all, and along the way redefined what being an award-friendly television series means.

The last time a horror show was nominated for a Golden Globe was in 2011, with a nomination for American Horror Story, but since then there hasn't been much Globe love for shows interested in scaring the audience. Of course, Stranger Things isn't all about frights – the show is equal parts terrifying monster movie, high school drama, and light-hearted action-adventure romp, which are three genres not often seen getting nominated for Golden Globes. The nomination for Stranger Things is a huge victory for television that isn't typically "award-worthy".

What is award-worthy television? Well, in the past few years the winners of Best Drama Series at the Golden Globes include the politically-charged hacker thriller Mr. Robot, perspective-shifting romantic drama The Affair, crime epic Breaking Bad, and political thriller Homeland. All of these shows, with the exception of The Affair, are stories that occur on major scales, where the characters decide the fate of a city, a country, or even the world. Stranger Things is a small-town story at heart that jumps genre and tone across its 8-episode season and more than any other recent Best Drama Winner – It's fun.

Televised dramas usually aren't supposed to be fun. They're dour, often depressing affairs that push big thematic points and tug at the viewer's heartstrings. While there were certainly a few moments like that in Stranger Things (like the ending of Episode Three, set to that big sweeping cover of David Bowie's "Heroes"), the show frequently showed a light-heartedness to it, interrupting the tension of the show with a joke or a celebration of chocolate pudding. Perhaps after the difficult year that was 2016, the Hollywood Foreign Press Association decided that there's no harm in having a little bit of fun in a Drama series.